Greenlight > Games > Crowned Daemon Studios's Workshop
Greenlight is being retired. For more information on how to submit games to steam, refer to this blog post.
This item has been removed from the community because it violates Steam Community & Content Guidelines. It is only visible to you. If you believe your item has been removed by mistake, please contact Steam Support.
This item is incompatible with Greenlight. Please see the instructions page for reasons why this item might not work within Greenlight.
Current visibility: Hidden
This item will only be visible to you, admins, and anyone marked as a creator.
Current visibility: Friends-only
This item will only be visible in searches to you, your friends, and admins.
Freak
Description Discussions4 Announcements3 Comments62 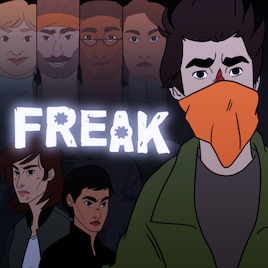 Freak has made the jump onto Kickstarter! You can view the campaign below:

Any help, whether it be donating or spreading the word, would be greatly appreciated!

As a side-note we will be updating this steam page with new screenshots and video footage highlighting the combat and zombie vision in a little over a week, so be ready for that too!

We are thrilled to announce that after 18 days of being on Steam Greenlight, we are officially GREENLIT! All of us at Crowned Daemon Studios would really like to thank everyone who voted (positively or negatively) and shared feedback with us regarding the game. We have been listening and we appreciate each and every one of you. Don’t think this is going to mean a lull in announcements. We’re charging full steam ahead of bringing the demo to you, and in the meantime we want to keep providing you with new details about the game, starting TOMORROW with a set of posters for each of our featured characters. We will still be regularly checking and updating our Steam Greenlight page so feel free to continue to communicate with us there. As always, we’re listening on Facebook and Twitter as well, so don’t be afraid to reach out to us with those outlets either. Again, thank you so much for your support. We’re all so amazed and humbled by the response we’ve gotten over the past few weeks and we’ll never be able to thank you guys enough. All of us are so happy to be a part of this community and so excited to have you on board with us.

Freak is a top down stealth shooter with a focus on strategy. In Freak players play as Tinker, a fourteen year old autistic boy who has recently been turned into a zombie but somehow retained his humanity. As Tinker you’ll travel across expansive levels that encourage exploration and meet many interesting characters along the way. How you choose to interact with these characters, among other choices you make in the game, will influence the outcome of your journey. Throughout the game you will also be able to uncover side missions that will allow you to play from the perspective of other characters, giving you more insight into the post-outbreak world.

Alone in his moment of crisis, you play as Tinker: a fourteen year old autistic boy who has been turned into a zombie but has miraculously retained his humanity and wits. You are tasked with making a large journey across devastated land to reach the scientists you believe can help you. As you travel you begin to unravel the pasts of those who came before you and piece together your own story.

Taking place five years after the initial breakdown of society in North America, you will encounter many different people and learn how they have coped with the zombie outbreak and how different life has become. Different groups and factions have arisen out of the ashes of society, some for the better and some for the worse. How Tinker deals with them will shape his mark on history.

Stealth and Cover
Tinker has the option to utilize stealth mechanics as he moves around the maps. Stealth helps Tinker get by groups of enemies that would normally be extremely challenging or impossible to approach directly. Tinker’s stealth is measured by different levels of cover which leave him less visible to enemies around him. Through a combination of natural cover (such as trees and grass) along with crouching, you'll be able to find ways to evade your enemies, but be wary: the higher your level of cover, the more restricted your visibility will become and the harder it will be to keep an eye on your adversaries.

Zombie Mode
Although Tinker has kept his humanity intact, with some concentration he can use his newfound zombie senses to his advantage. Any human enemies you kill without damaging the head will yield brain matter which you can eat, offering both a temporary health boost and allowing you to unlock Zombie Mode. Zombie Mode allows you to detect human enemies more easily and tricks other zombies into believing you are one of their own. However, if you use zombie mode too often you will lose your humanity altogether and have to fight to regain control. Characters you meet may also be put off by your usage of Zombie Mode and those who see you as more of a monster than a person may opt to shoot before asking questions.

Choice and Character Interaction
Within both the main plotline and side missions there will be many times where the player character will be tasked with making choices in game that will affect people’s opinions, reactions and the overall story. This includes the choice to utilize Zombie Mode and how often. Tinker will also have the opportunity to help others along during his journey, though not without risk. Risks are not without reward however, and taking the time to help these people will almost certainly have a positive effect on your ending.

Enemies
Enemies come in many different forms and cannot be approached with a one-size-fits-all method that guarantees success. Each will have strengths and weaknesses. Zombies are not as strong and smart as human opponents but they can detect you far more easily and travel in large numbers. As you get closer to your destination you will also come across better-equipped and better-trained human opponents that will require cautious planning to dispatch.

Immersive World and Storyline
Tinker is not the only character you can play as! Uncover all of the side missions and you can play as different characters, all of whom have different backgrounds and many with secrets they would rather keep buried. Each level, whether it is a side mission or one of the many levels Tinker goes through in the main storyline, is large and expansive – encouraging players to explore the world around them and never approach the same mission the same way twice.
Popular Discussions View All (4)

javierucu Feb 5, 2016 @ 12:25am
hi, i think Freak looks fantastic. I love horror, hehe. Now i´m finishing the soundtrack in other game and it would be great to work beside such a promising team. I think my music could fit well in your project. You could listen here: https://www.youtube.com/watch?v=pA7fQzZ9gUU What do you think? my email is: cga.sound@gmail.com Thank you. Good Job.

Gräfin Jun 2, 2015 @ 3:07am
Looks interesting. I have aspergers myself so it's nice o see a playable character on the spectrum. Plan on picking it up when released!

Eustace the Monk May 7, 2015 @ 11:35pm
Love the idea, but like others have said the graphics and animations need work. But it's intriguing....if he's a zombie, do the other 'full blown' zombies ignore him as one of their own or attack him?

syukoshiomy May 5, 2015 @ 12:29pm
i like the gameplay's feeling and i like the story. if the graphics are improved upon id definitely consider this

Wryn May 2, 2015 @ 3:31pm
This game definitely has a ton of potential; hopefully the devs really take the time to flesh out the story, and make it interesting and fascinating.