Greenlight > Games > Iron Dynamite's Workshop
Greenlight is being retired. For more information on how to submit games to steam, refer to this blog post.
This item has been removed from the community because it violates Steam Community & Content Guidelines. It is only visible to you. If you believe your item has been removed by mistake, please contact Steam Support.
This item is incompatible with Greenlight. Please see the instructions page for reasons why this item might not work within Greenlight.
Current visibility: Hidden
This item will only be visible to you, admins, and anyone marked as a creator.
Current visibility: Friends-only
This item will only be visible in searches to you, your friends, and admins.
Quark
Description Discussions0 Comments42 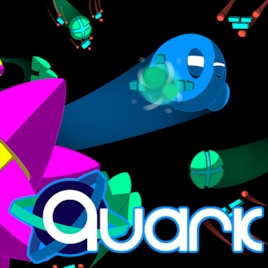 Shrink down to the size of a particle and explore the mysteries of the Large Hadron Collider as Quark! In this classic-styled, top-down shooter you will be assaulted by wave after wave of enemies. Fire a Stun Blast to lock an enemy in place and keep it from harming you. Next, use your Detonation Beam to explode a stunned enemy causing a chain reaction to destroy multiple enemies, whether they are stunned or not!
As you destroy more and more enemies you will gain temporary access to super weapons, including : Gattling Guns, Artillery, Beam Swords, and more!

Iron Dynamite  [author] Aug 8, 2015 @ 11:08am
We are still hard at work guys and the Campaign mode is coming along nicely! Tell your friends and thanks for the continued support!

Iron Dynamite  [author] May 2, 2015 @ 9:03am
Wowzers! Once again, we are so thankful for all the people who are keen on helping us see our game make it onto the Steam library proper! Tell your friends! Tell the world!

thePumpkinKing Apr 25, 2015 @ 1:47pm
It looks really great and i love the soundtrack on the trailer! Looks like a lot of fun