Greenlight > Games > jere's Workshop
Greenlight is being retired. For more information on how to submit games to steam, refer to this blog post.
This item has been removed from the community because it violates Steam Community & Content Guidelines. It is only visible to you. If you believe your item has been removed by mistake, please contact Steam Support.
This item is incompatible with Greenlight. Please see the instructions page for reasons why this item might not work within Greenlight.
Current visibility: Hidden
This item will only be visible to you, admins, and anyone marked as a creator.
Current visibility: Friends-only
This item will only be visible in searches to you, your friends, and admins.
Golden Krone Hotel
Description Discussions2 Announcements3 Comments51 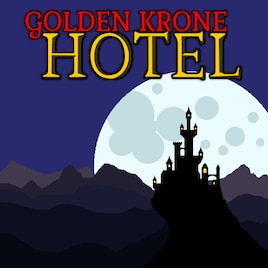 jere
Online
See all 5 collections (some may be hidden)

In case you missed it, I have released a Halloween themed release for Golden Krone Hotel.

There is a new branch (the Graveyard), new monsters, new classes, and new potions. Oh and all torches have been replaced by Jack 'o Lanterns.

I haven't publicly released a version of Golden Krone Hotel in 7 months. Last weekend, I decided to do so.

Now I have standalone builds for PC, Mac, and Linux. Download here.[jere.itch.io]

As always, feedback is greatly appreciated! :)

Read More
Description
Venture into the Golden Krone Hotel for 10 floors of turn-based roguelike mayhem.
Kill vampires with sunlight or become a vampire yourself and use stealth to sneak up on pesky humans.

Humans are weak, but cast powerful magic. Vampires are tough and fast brawlers, but they depend on blood to regenerate health. To survive, you'll need to strategically switch between vampire and human forms at the right times.

What people are saying
"This is the type of roguelike I like to see. It's really in depth. There's a lot to do, a lot to figure out."- Ctrl+Alt+FaceRoll
https://youtu.be/Lc_4M_fxxZ4

"Looks like you can get a lot of fun out of this game." - TheUberHunter
https://youtu.be/p7vfoyKDH2k

"It has this idea that it's bigger than what it is. And it has the innovation. It has that wonderful sunlight mechanic." - CrazedNaly
http://www.roguelikeradio.com/2015/03/episode-98-what-players-want-from-7drls.html

Play it now!
The game is in a completely playable state, but tons of updates are planned. Check out the last published version here: http://humbit.com/gkh/gkh-v1.6/index.html

jere  [author] Feb 5, 2016 @ 10:38am
Thanks, javierucu. I've already partnered with a musician. I do appreciate the offer and the kind words though.

javierucu Feb 5, 2016 @ 12:26am
hi, i think Golden Krone Hotel looks fantastic. I love horror, hehe. Now i´m finishing the soundtrack in other game and it would be great to work beside such a promising team. I think my music could fit well in your project. You could listen here: https://www.youtube.com/watch?v=pA7fQzZ9gUU What do you think? my email is: cga.sound@gmail.com Thank you. Good Job.

Shadowblades Jan 21, 2016 @ 6:44pm
Hey Jere, I arrived here from a a Youtube comment of yours. I saw the trailer and didn't even realize that you're already greenlit! Congratulations!

Not A Canadian May 21, 2015 @ 9:11am
I was trying on the stained glass and a few other wall pieces. I reloaded the page multiple times, after about the 6th time it started working. No clue what happened, but I love the game :D Well done.
< >

Golden Krone Hotel has been Greenlit and is now listed in the Steam store. For the latest information, purchase options, and discussions for Golden Krone Hotel, please see it on the Steam Store or in the Steam Community.
Visit Store Page
For more details Visit Community Hub
For latest discussions
If you really, really want to, you can continue to the Greenlight page. Information on this page may be out of date, since all the action has moved to the areas noted above.