Store Page
Cities: Skylines>  Workshop > Spectra's Workshop
This item has been removed from the community because it violates Steam Community & Content Guidelines. It is only visible to you. If you believe your item has been removed by mistake, please contact Steam Support.
This item is incompatible with Cities: Skylines. Please see the instructions page for reasons why this item might not work within Cities: Skylines.
Current visibility: Hidden
This item will only be visible to you, admins, and anyone marked as a creator.
Current visibility: Friends-only
This item will only be visible in searches to you, your friends, and admins. 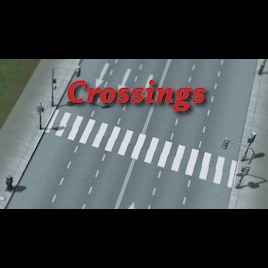 Spectra
Online
See all 16444 collections (some may be hidden)

This item has been added to your Subscriptions. Some games will require you to relaunch them before the item will be downloaded.
Description
Update: I've just pushed a new version that re-enables the Harmony-based implementation, this time using the CitiesHarmony compatibility layer. Hopefully this will improve interaction with other mods without breaking stuff using older Harmony versions.

I know a lot of people want a movable button - it's on my list - no need to keep commenting, thanks :)

NOTE: If the button is not appearing for you, and you have any of the [ARIS] mods installed, please try disabling them. Some (but not all) people have had them conflict. The Enhanced Garbage Truck/Herarse AI mods are also reported to cause this problem in some cases. We're trying to figure out the cause, but have had no luck so far.

This mod allows you to places crossings on your roads at locations other than intersections and transitions between road types (where they are automatically placed).

To answer the most common question first: This mod does NOT allow you to remove the crossings the game puts in by default. Nor do I have any particular plans to add that (but I don't object to the idea - feel free to submit a patch).

To place a crossing, go to the Roads menu. Underneath the buttons which allow you to select straight, curved etc there should now be a button with a pedestrian icon on it. Select this and you will be able to place crossings at most of the same locations where you can currently create an intersection.

To remove a placed crossing, simply right click on it using the same tool.

NOTE: I've tried to squash all the major bugs, but please don't blame me if it doesn't work properly, corrupts your savegame or sets your computer on fire. However please DO submit a bug report (ideally as an Issue at the github link below) or, better yet a patch.

As far as as I know this mod is compatible with all other traffic management mods. In particular, I've tested it with:
* Toggle Traffic Lights
* Extended Road Upgrade
* American Roads
* Road Color Changer
I've also had reports that it works fine with:
* Traffic++
* Traffic Manager Mod (but don't try to mix their crosswalks with these - that's where you'll hit problems).

If you do find any incompatibilities, please let me know.

Known bugs:
* The crossing texture looks smeared right at the centre on 4 lane roads, but 2 and 6 lane roads are fine.

Future enhancements:
* Add tooltips for when a crossing can't be built
* Stop street signs appearing at crossings
* Highlight buildings which will be destroyed by crossing creation (which can sometimes happen on curved roads because the curvature changes slightly).

Source code is available at https://github.com/bernardd/Crossings

Thanks to everyone who helped me out and everyone else who made their mods' source code available for referencing and copying. And thanks to Colossal Order for giving us a fantastic game. Thanks especially to @hyperdrive_engage and @LinuxFan for submitting patches.

If you want to say "thanks" financially, there are plenty of people in the world who need the money more than me. Throw a few bucks to your favourite charity (mine's http://msf.org ).

FAQs:
Q: Can I remove crossings at intersections with this?
A: No, and I don't expect to add that feature any time soon - it's a non-trivial bit of work which, beleive it or not, has almost nothing in common with the work I did for this :)

Q: Do pedestrians actually use these?
A: Yes!

Q: Why aren't crossings appearing on [my favourite road type that comes with some other mod]?
A: Odds are the texture with the mod doesn't include crossings (they probably don't appear at intersections either). If that's the case, there's not much I can do - this mod doesn't change any existing textures, nor add any new ones.

Q: Why am I getting two crossings rather than one like in the screenshots?
A: This can happen if you're also running Network Extensions or another mod that also replaces the junction rendering function. Not much I can do about that, I'm afraid.
Popular Discussions View All (5)

i get this message now, after your work with harmony
wasnhierlos

Known bugs: * The crossing texture looks smeared right at the centre on 4 lane roads, but 2 and 6 lane roads are fine.
Eep²
< >
840 Comments

Spectra  [author] Aug 4 @ 12:17am
Hi all,
I've just pushed out a new version that attempts to use the Harmony hooks rather than replacing code. I'm now doing so via the CitiesHarmony mod which should hopefully fix the compatibility issues with my last attempt.

In theory this should improve compatibility with other mods - please let me know if you hit any problems.

I'm aware that plenty of people are having issues with the button I'm looking at how to go about making the button movable, but UIs aren't really my strength so it's probably taking me longer than someone who had the faintest idea what they were doing.

Julius Drive Jul 28 @ 10:20am
The button is not appearing anymore and I don't change anything except subscribe to TMPE LABS instead of STABLE, could it be the issue ?

Unfriendly Jul 25 @ 2:30pm
Doesn't work for me anymore even on vanilla roads. Could CSUR be related to this?

AWESOME CATS Jul 20 @ 7:46pm
This mod is still working for me. I have Harmony 2.0.1 and Hide TMPE Crosswalks (not the “experimental” version) installed (as well as common mods like Move It, etc.).

deinoman420 Jul 14 @ 8:17pm
Was working fine, until today. Recently started causing an issue where the whole map doesnt load, just the blue sky. Loading screen mod will say something like "no reference for object, simulation failed" . had to go thru adding mods one by one until I narrowed it down.

dabble Jul 3 @ 3:03pm
I use this a lot. Thanks for making it! Any chance you can make the button movable? It's for some reason placed directly behind my districts button now and it makes it difficult to use.

SergJack Jun 22 @ 8:13am
Here's the log. It mentions Remove Crosswalks, but the error goes away when i disable this mod, and on RM's page it says it's not compatible with this mod.

SergJack Jun 22 @ 7:55am
This mod is incompatible with Remove Crosswalks and Remove Unconnected Tracks. Throws a Harmony error.

bpeme4ko Jun 13 @ 6:22am
Same here. The mod stopped working after subscribing to Harmony 2.0.1 (needed for RICO Revisited) ;( When I load the city, the game sets itself on pause. Pressing "play" button doesn't change anything - no cars/people/bikes/trains start moving...
< >