Greenlight > Games > DessertFirstGames's Workshop
Greenlight is being retired. For more information on how to submit games to steam, refer to this blog post.
This item has been removed from the community because it violates Steam Community & Content Guidelines. It is only visible to you. If you believe your item has been removed by mistake, please contact Steam Support.
This item is incompatible with Greenlight. Please see the instructions page for reasons why this item might not work within Greenlight.
Current visibility: Hidden
This item will only be visible to you, admins, and anyone marked as a creator.
Current visibility: Friends-only
This item will only be visible in searches to you, your friends, and admins.
Scenario Chess
Description Discussions0 Announcements1 Comments22 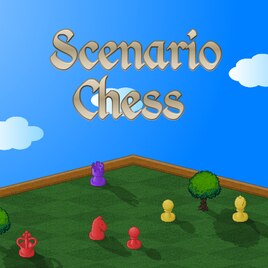 Scenario Chess has been Greenlit! Thanks to all who voted!

• capture enemy king(s), or capture all pieces
• pawn promotion squares (marked with stars) at various locations, or sometimes nowhere at all
• dozens of levels spread out across various campaigns
• difficulty ranges from very easy to almost impossible!

Throughout the game, you'll encounter custom rules on some levels:

• 4-way pawns: they move 2 squares in any straight direction, but can only attack 1 square in diagonal directions. This lets an army move across the whole map, not just up or down.
• commutable bishops: they can take 1 step in a straight direction (but cannot attack this way), so they're no longer limited as light- or dark-bishops.
• sometimes commutable rooks too!
• promotions are sometimes limited, so you can't always choose a queen

Is Scenario Chess an RPG-type game?
No. There's no collecting gold, no leveling up, no talking to NPCs, and no "side-quests". This is basically just chess on custom terrain!

What platforms are supported?
Windows 7 & 8.1, 32- or 64-bit. Scenario Chess was made in MonoGame, so we should be supporting Linux and Mac soon.

How many levels are there?
57 levels within 8 campaigns. Some of them are very challenging! Check out the screenshot of the Black Knights campaign, which has 7 levels.

Is there any castling or en-passant?
No, these special moves don't exist in Scenario Chess because the levels and setup are very different from the regular 8x8 chess board.

Is there an undo button?
Yes, you can undo any move, all the way back to the start of the level if you want.

Is there a level editor yet?
No, not yet.

Is there multi-player yet?
No, not yet. For now, you'll have to play against the computer.

I'm not the greatest chess player. Will I be able to play this game?
• Probably. There's an undo button, and attacked pieces and potential moves are marked with an X so you can see where it's safe.
• If you can't remember how pieces move, don't worry. Just hover your mouse over any piece to see its moves.
• If you're having difficulty against the computer, try to lure an enemy piece by using one of your high-valued pieces. The computer loves to chase kings, queens, and rooks!

Is there a working build of Scenario Chess?
• Yes, the latest version is 1.04. It works on Windows 7 and 8.1, whether 32- or 64-bit.
• If we get greenlit, it shouldn't take long before Scenario Chess goes on sale on Steam. But depending on how difficult the steamworks SDK is to integrate with the code, it might be 1 to 3 months.

BTW, you will be able to customize the rules in the level editor, so you can make the pawns move the classic way if you want. But the built in levels have set rules that you can't change of course, although different campaigns may have different rules.

Please tell all your steam friends and help us get greenlit! We're at 32% so far but things have slowed down, so please spread the word. Thanks!

Question - Not sure if this is a game mechanic you've implemented or a chess rule but...
Why (at approx 15 seconds) does the pawn move 2 spaces?
Either way, this looks like fun --------- Just read the rest of the description, haha whoops. NO I WON'T HIDE MY SHAME.

Digiomegamon Jun 18, 2015 @ 5:35am
this looks great, everyone loves bughouse, suicide chess, doublemove chess, atomic chess, titanic chess because of the variation on chess. this game would be massively appealing, more so than jus regular chess!

DessertFirstGames  [author] May 15, 2015 @ 11:10am
Yeah there will definitely be a level editor! It will export your level to a file, which you can then share however you want. Of course Scenario Chess will also let you play custom levels, which loads a level from a file, so there you go.

The level editor, and improved main menu graphics, are our next priority!