Greenlight > Games > Bleed Indie's Workshop
Greenlight is being retired. For more information on how to submit games to steam, refer to this blog post.
This item has been removed from the community because it violates Steam Community & Content Guidelines. It is only visible to you. If you believe your item has been removed by mistake, please contact Steam Support.
This item is incompatible with Greenlight. Please see the instructions page for reasons why this item might not work within Greenlight.
Current visibility: Hidden
This item will only be visible to you, admins, and anyone marked as a creator.
Current visibility: Friends-only
This item will only be visible in searches to you, your friends, and admins.
Bigger in Texas
Description Discussions0 Announcements2 Comments41 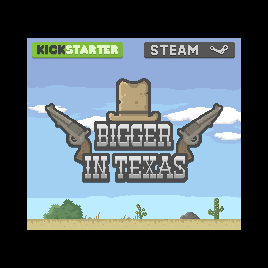 Currently we have 662 'YES' vote to be Greenlit, which is amazing!! Please share #BiggerInTexas with your friends!

Right now, we are focusing on rebuilding after the Kickstarter. We got a lot of great feedback from a lot of awesome people! Most people were not a fan of the combat system, and we are going to put all of our development focus on changing it to make it more enjoyable.

Thank you so much for your support! Please share Bigger In Texas with all your friends!! :)

In the game, you are an average everyday Texas man whose hat has been stolen by a group of outlaws. You're now on a journey to find your precious hat and avenge every hat in Texas. Along the way, you'll encounter a wide variety of characters and destinations all in an effort to find your baby.

The police certainly won't catch these guys. Texas needs the help of a real cowboy. Perhaps you're not too keen on these pictures and words. Why don't you mosy on down and play the Demo! http://havingunt.itch.io/biggerintexas

Goal Overview
When this campaign is successful, we plan to:

Dem' Pixels
We've been grinding our fingers to the bone to deliver an experience that doesn't give anybody sore eyes. We'd like to be able to dedicate more time to doing just that. It will give us time to revise and add to our existing Texas locations.

Dang ole' Missions
The current story mode is based on going from person to person to explore the story. We will be hiring a narrator to write a more layered and interactive dialogue that changes based on the quests. Also, as we expand the game down into Mexico, we will also be expanding the story. Wanna have some dialogue? We can make that happen.

Them there Dynamic Interactions and Environments
When you speak to a character in Bigger in Texas, the dialogue is always the same and the environment doesn't change. Having financial backing would enable us to strive towards creating more dynamic interactions and environment.

One heck of a wave mode
We'd like to expand upon the current Bigger in Texas experience by adding a wave mode. This would include character leveling, weapon arsenal, etc.
< >
41 Comments

shadree May 18, 2015 @ 7:25am
I'm voting NO. The low res graphics, the TINY text atop the screen and the video has no commentary about what the game is about or how you play it.

Bleed Indie  [author] Apr 27, 2015 @ 1:52pm
Thanks you all for your feedback. This game is in an early alpha stage. We do plan to fix / change the combat system. Thank you for your support!