Greenlight > Games > Gheeyom's Workshop
Greenlight is being retired. For more information on how to submit games to steam, refer to this blog post.
This item has been removed from the community because it violates Steam Community & Content Guidelines. It is only visible to you. If you believe your item has been removed by mistake, please contact Steam Support.
This item is incompatible with Greenlight. Please see the instructions page for reasons why this item might not work within Greenlight.
Current visibility: Hidden
This item will only be visible to you, admins, and anyone marked as a creator.
Current visibility: Friends-only
This item will only be visible in searches to you, your friends, and admins.
Outward - The Adventurer Life Simulator
Description Discussions5 Announcements4 Comments672 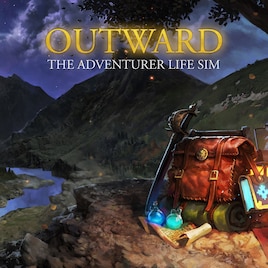 Gheeyom
Offline
See all 73 collections (some may be hidden)

View Outward - The Adventurer Life Simulator in the store

Hi all! It's been seemingly forever, but we were still working hard on the game. Today we can finally announce the release date: February 12, 2019.
Outward will be published by Deep Silver.

We got a new trailer for the occasion :)

Hi all!
So we just released a new trailer for the game, and I think you'll like the progress we've made!

Also, if you're heading to Seattle for PAX West, make sure to come by out booth (#7303). The game will be available to play, in split screen no less!

Read More
Description
Outward is an open world RPG with a focus on simulating the life of an adventurer -- not a legendary hero.

Outward started with a simple question: "What would it really be like to live the life of an adventurer?"

Outward want to simulate the day-to-day lifestyle of living alone in a vast world filled with creatures of fantasy to retiring and passing on your knowledge and skills to your next of kin, Outward is about creating a complete adventuring experience. It's not just combat, it's not just survival, it's both and more.

Key features
Solo or Cooperative survival and adventure
You can explore the world alone, or if you are tired to play the lone wolf, you will be able to play with others, both Online and Splitscreen. Hunt while your friend is setting up camp or explore while the other stands guard over your gear.You are free to split up and roam miles apart from each other.

Fixed difficulty and free-form adventuring
The game allows you to go anywhere you want right from the start of the game. Just be clever enough to survive!

An open world filled with handcrafted regions
You will have good reasons to explore the whole world rather than just running around the map from location to location.

A complete adventuring experience
This game won't do everything for you. Perform multistep rituals to cast spells, strike flint to start fires, and locate yourself on the map using visual landmarks.

Fully envisioned survival mechanics
Boiling your water for safe drinking, hunting for your next meal, and bundling up clothes to survive the harsh winters are just a few examples of how far we plan to go.

Permanent consequences to every one of your actions
You can't simply save/reload before a tough choice or fight. The game is constantly saving and overwriting.

Legacy system to pass down items and skills
Death and retirement doesn't mean the end of your adventures. Pass down your gear and teach your skills to the next generation.

Dynamic quests that continue with or without you
No one is standing around waiting for you to come along and save them. If you aren't there or choose to ignore those in need, life goes on without you.

Dynamic player defeat
Losing a fight against a group of bandits won't simply have you looking at a "game over" screen. Instead, you might wake up to find yourself being held for ransom, or being dragged into the woods and left for dead after they've looted your belongings.

Failure is part of life. In Outward, defeat is simply a part of your character's journey.

Combat & Magic
Outward's combat reflects that you aren't some godly hero. The enemies can cast spells, use equipment, and fight just as you can. You simply aren't the only one in this world able to grow in power.

Weapons types all have unique movesets with each attack having a different pattern, reach, speed, and force. Allowing the player to gracefully overpower their foe and catch them off guard.

Magic in Outward requires some level of preparation. You won't be able to cast a massive firestorm by pressing a single button. Instead, magic is a deliberate process in which you combine basic spell components together in rituals to unleash your most impressive arcane abilities.

Survival
Part of the deal as an adventurer is to figure out how you are going to survive the harsh environment. Use of appropriate clothing, building shelter for the night, hunting for food and purifying water are all part of your day-to-day routine.

Being caught out in a snowstorm or stranded in the desert without proper equipment and tools means near certain death. However, you don't have to face these dangers alone. You and some friends in splitscreen and online can help each other survive by hunting, fighting, and questing together as a team.

World & Factions
The land Aurai is dynamically changing throughout time. For example, during the winter snow not only covers the ground but builds up flake by flake until it covers every ridge and fills every tree. As each day passes you can visually see a shift in the environment.

There are four factions that hold control over the regions of Aurai. You can chose to join one of them to climb its ranks and experience their unique storylines.

The Blue Chamber Collective is formed of smaller clans that mostly try to keep to themselves. The collective is the most powerful political association in Aurai. Though separated in clans, the one value they all share is the importance of family.

The Heroic Kingdom of Levant is a new power that tries to take over the Blue Chamber by promising to liberate the population from the harsh obligations of their current lives by creating a new utopia.

The Holy Mission of Elatt is a religious power that promotes the importance of achieving your utmost potential in order to better protect and serve your loved ones.

The Soroboreans are a very powerful institution, they are the highest authority in academic knowledge throughout the land. They are also deeply involved in commerce, using information as a key resource in their expansion.

Any plans if KS fails?
Andrew

ouTPhaze Aug 17, 2018 @ 9:26am
Awesome! I hope a lot of what was originally promised is still a thing, like not being the hero unless you want to be (ability to have a "normal" life and whatnot), and other freeform survival and RPG stuff

Gheeyom  [author] Aug 17, 2018 @ 6:38am
No such thing planned at the moment. We're pretty far in development already, now we're focusing on debugging as much as possible of the known bugs/issues we have.

Gheeyom  [author] Aug 2, 2018 @ 2:47pm
It's still coming! We've been forced to silence due to factors outside of our control. The game's development has been going forward without interruption since.

ELDERBLIVION Aug 2, 2018 @ 1:11pm
Been about 8 months since anything posted from NineDots. Anyone know if OUTWARD is still proceeding FORWARD?

Outward - The Adventurer Life Simulator has been Greenlit and is now listed in the Steam store. For the latest information, purchase options, and discussions for Outward - The Adventurer Life Simulator, please see it on the Steam Store or in the Steam Community.
Visit Store Page
For more details Visit Community Hub
For latest discussions
If you really, really want to, you can continue to the Greenlight page. Information on this page may be out of date, since all the action has moved to the areas noted above.