Greenlight > Games > Space Bear Development's Workshop
Greenlight is being retired. For more information on how to submit games to steam, refer to this blog post.
This item has been removed from the community because it violates Steam Community & Content Guidelines. It is only visible to you. If you believe your item has been removed by mistake, please contact Steam Support.
This item is incompatible with Greenlight. Please see the instructions page for reasons why this item might not work within Greenlight.
Current visibility: Hidden
This item will only be visible to you, admins, and anyone marked as a creator.
Current visibility: Friends-only
This item will only be visible in searches to you, your friends, and admins.
Galaxy Heist
Description Discussions4 Comments149 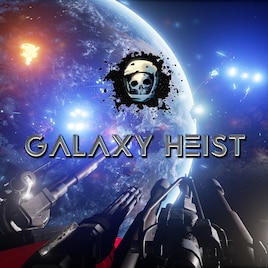 • A game focused on boarding other players ships
• Large teams split into 4-5 player sub teams and put on large flagships together
• Take control of the flagships turrets or jump into a small fighter to help defend the ship
• Use the tether mechanic to force yourself onto other ships
• Fight inside ships to take over and destroy them from the inside
• 100% skill based, no pay to win or grinding your way to a stronger character
• Play competitive PvP, custom players vs AI matches, or offline
• Works with any VR supported by Unreal Engine (Oculus, Gear VR)

Galaxy Heist teams players up on large flagships and gives them the ability to pilot the flagship, fire the turrets, and control the fighter drones that accompany the team’s flagship. When another flagship is disabled just take control of a turret and fire a tether over to the ship in order to board. Once boarded attacking players try to destroy the ship from the inside with dynamic First Person Shooter combat.

Players can use an array of weapons inside their ships such as the Vacuum cannon which ragdolls and blasts out any windows it hits, ripping all nearby players out into space. Blown out windows cause the ship to depressurize, players will need to boot up emergency oxygen in the under belly of the ship to prevent suffocation. Once the attacking team has initiated self-destruction inside the flagship they boarded, the ship is destroyed and the attacking team is brought back into the space battle.

Booby Hillz Apr 16, 2016 @ 11:31am
Join in online the steam group for updates to the game!
http://steamcommunity.com/groups/galaxyhype