Greenlight > Games > Glass Knuckle Games's Workshop
Greenlight is being retired. For more information on how to submit games to steam, refer to this blog post.
This item has been removed from the community because it violates Steam Community & Content Guidelines. It is only visible to you. If you believe your item has been removed by mistake, please contact Steam Support.
This item is incompatible with Greenlight. Please see the instructions page for reasons why this item might not work within Greenlight.
Current visibility: Hidden
This item will only be visible to you, admins, and anyone marked as a creator.
Current visibility: Friends-only
This item will only be visible in searches to you, your friends, and admins.
Defragmented - a Cyberpunk Action-RPG
Description Discussions1 Announcements13 Comments37 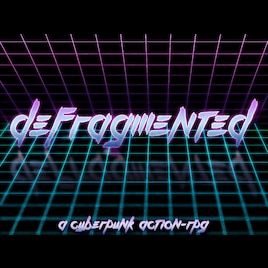 View Defragmented - a Cyberpunk Action-RPG in the store

Our Steam store page is now live! From now on, we'll post all announcements and information there. Check out the page and subscribe to the community group to stay up to date with things.

After months of hard work, we're excited to reveal that Defragmented will be going into a closed beta THIS MONTH!
Invitations go out this Friday. Sign up now in order to get access: http://www.glassknuckle.com/newsletter

Defragmented is getting closer and closer to completion, and we want our fans and friends to be able to test the game first - that way you get a sneak peek at the full game, while we get lots of useful feedback from the people that love us most!

We'll be conducting the bulk of the beta through our Glass Knuckle Newsletter[www.glassknuckle.com]. If you want to be a part of the beta and play the first act of the game, please sign up using the link above.

Also, be sure to follow us on Facebook[www.facebook.com] and Twitter for more updates on the game and upcoming events!

We look forward to sharing the game with you soon!

Defragmented's unique style of gameplay combines the fast-paced firefights found in Hotline Miami with action-RPG elements made famous by Borderlands and Diablo, all set to a pulsing, neon playlist that combines our favorite electronic genres – synthwave, electro, chiptune, and more. We're blending shooter & RPG game systems to create a deep and rewarding leveling system revolving around challenging gameplay (and a forgiving checkpoint system).

Our story is inspired by settings found in defining cyberpunk works like Akira and Blade Runner, while incorporating elements from our favorite contemporary classics like Mirror's Edge and Beneath A Steel Sky. We aim to immerse you in a cyberpunk story about cloning, rebellion, and the mysterious city of Entropolis. And yes, there will be hackers!

Run-and-gun through open conference rooms, take cover in tight hallways, and swap out your guns for even stronger ones. Shoot, die, and try again – you'll be able to quickly fly through levels and respawn even faster. You'll need a powerful arsenal and perseverance to overcome your enemy and solve the mysteries of Entropolis. Equip one main weapon, two side weapons, grenades & two "program cores" to outfit your character exactly the way you want.


Defragmented takes place in the city of Entropolis, a beacon of hope in an otherwise wasted world. Take to the streets, cast under the neon glow of the aerial tramways. Visit the local museums, where the art of hacking and body modification turns patrons into exhibits. If you're feeling brave enough, venture outside the city and take a educational tour of Entropolis' many farming domes.

Your story in Entropolis revolves around the agendas of the groups that work behind the scenes of everyday life. Why is the council so protective of the city's borders? Is Mai Vermouth, head curator and public nuisance, tied closer to the hacker movement than she's letting on? Where is the city protection force getting their staff from?

Here are the three classes you can play as in Defragmented:


Each class has two unique skill trees, which grant your character unique active & passive abilities. You'll also be able to cosmetically change your character by picking a gender and skin color.

We are planning to create a few hours of content spread across multiple levels of various sizes.

Diabeetus Fetus Jun 10, 2015 @ 2:18pm
For a cyberpunk setting, it seems to be missing a lot of the features that make cyberpunk fun. Like digital hacking, and, you know, punk. Right now it just looks like a generic shooter with neon lights.

Apart from the perspective and genre, it's nothing like Hotline Miami. You really need to have more pride in your game and stop comparing it to other games. "Our game is like x, y and z" should not be the main selling point of your game. You should be highlighting and emphasising the more interesting mechanics and leave other people to make comparisons.

Also, just ignore the delusional people calling this game a clone. One day, maybe when they're older, they'll realise Hotline Miami did not invent the 1980s nor synth-based music.

Defragmented - a Cyberpunk Action-RPG has been Greenlit and is now listed in the Steam store. For the latest information, purchase options, and discussions for Defragmented - a Cyberpunk Action-RPG, please see it on the Steam Store or in the Steam Community.
Visit Store Page
For more details Visit Community Hub
For latest discussions
If you really, really want to, you can continue to the Greenlight page. Information on this page may be out of date, since all the action has moved to the areas noted above.