Greenlight > Games > mycon's Workshop
Greenlight is being retired. For more information on how to submit games to steam, refer to this blog post.
This item has been removed from the community because it violates Steam Community & Content Guidelines. It is only visible to you. If you believe your item has been removed by mistake, please contact Steam Support.
This item is incompatible with Greenlight. Please see the instructions page for reasons why this item might not work within Greenlight.
Current visibility: Hidden
This item will only be visible to you, admins, and anyone marked as a creator.
Current visibility: Friends-only
This item will only be visible in searches to you, your friends, and admins.
ExoCorps
Description Discussions6 Announcements1 Comments270 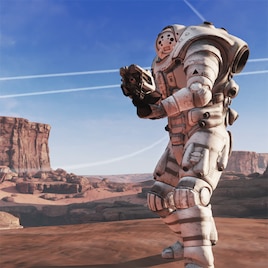 mycon
Offline
See all 22 collections (some may be hidden)

View ExoCorps in the store

Q: How does the combat work?
A: We really wanted to have a cat-and-mouse type of experience, followed by very intense dogfights and shootouts across vast spaces, with weapons that feel more like those carried on a futuristic helicopter rather than the standard pistol, assault rifle, shotgun, and sniper rifle loadouts common in shooters. To this end what we’ve done is made a weapon with six firing modes (like the Zorg Industries ZF-1 from the movie Fifth Element), and incorporated some additional weapons into the exosuit. Instead of health, players have Power, which functions as both your ammunition, AND your health. Flying takes power, shooting takes power, and suit abilities will take power. When a player is not flying power will slowly recharge, and when your power is out, the “test” is over, and your friendly local military industrial complex pulls you out of the fight. I’ll try to go over each weapon in a gameplay video soon.

Q: How do you find your opponent/s in a giant map?
A: There are several features that get the action going and help define how players meet each other within the “test area”. The most fundamental aspect of this is your “Emanations” meter. Many actions a player takes in their armor make them more detectable by their opponent/s. Firing different weapons affect how detectable you are for a short period of time. Using your jetpack makes you more detectable. Being closer to enemies will allow them to detect you better. Players have a cloaking system, which instead of making you invisible like many games, lowers your detectability level. If both players are keeping it quiet in a submarine style hide-and-seek type of game, a player can trigger a “Recon Pulse”, which uses half their power (currently), and blasts the area with radiation to make his opponent glow on the Radar. The Radar itself features two colors of blips, green for “currently detected”, and red for “last known location”. All of these systems work together to allow players to track, feint and hide from each other to set ambushes, or go at each other gung-ho and weapons blazing. I’ve had matches that explode into action right from the start, and matches where there’s a lot of sneaking around to get the drop on someone.

Q: What engine are we using?
A: ExoCorps uses the Unreal Development Kit

Q: Will there be more environments/maps?
A: Yes. There are other maps and environments in development. They just aren't ready to show off yet, I have to "tighten up the graphics." :)

Q: Customization?
A: We weren't considering it for initial release, but the armor is built with custom skins and badges in mind. Our current thinking is to implement the feature post-release.

Q: Vehicles?
A: Vehicles are not within the current scope of the release. Normally vehicles exist to either make the player faster, or give them more firepower. But the point of the exo-armor is that the suit provides extra firepower and speed (and flying). The traditional sorts of vehicles that act like helicopters or tanks are intended to be somewhat obsolete in comparison to the exosuit, so it’s not clear to us what role they would take.

Q: Game modes?
A: The original idea was to make a tight 1vs.1 dueling game, but we’ve played with four players now and it’s pretty clear that more than two person deathmatch is both relatively simple to do, and fun. We like the idea of team based modes, but right now it’s unreasonable to dedicate the resources to it.

Q: Are you using the Free to Play model?
A: No

Read More
Description
Jetpack Deathmatch with Lasers and Missile Swarms. Hunt your foes across vast landscapes and choose the right weapon settings of your Multirifle for your attack. Balance the use of power and watch your heat emanations to avoid detection on radar. Use your ExoArmor subsystems for offense and defense.

In the year 2040, an international team has come together to create a new brand of conflict doctrine for the future. Virtual and live-fire excercises, hardware trials and tactics evaluations are held in top secret installations around the globe. As esoteric and dangerous technologies are combined by top engineering and scientific minds, applicants are recruited from peacekeeping services around the world in order to train, test and define a new paradigm of warfare. If you want to work with the best, and want to play a part in defining the future, you too can apply to be a part of the first panhuman enforcement branch; the ExoCorps.
Popular Discussions View All (6)

Brian Oct 26, 2015 @ 2:01am
hey man, i want to support your game as much as possible and get it as much attention as possible. if you can, give me beta/alpha and ill do some vids+showcases+reviews for you www.youtube.com/431PRODIGY add me on steam, reply to this or comment on one of my videos to respond please

As well as this game: http://steamcommunity.com/sharedfiles/filedetails/?id=536792906&searchtext=Demented which you can ask "VisualTech48" for further assurance.

I dont want people to get the wrong idea as many others have, i am not doing this to grab a free game or to simply promote my channel hence why i said beta/alpha/demo and not a full copy. I am merely attempting to help out a developer as much as possible and the only reason my channel is in here is to prove that i do have a channel.

mycon  [author] Sep 9, 2015 @ 3:24pm
@Shiratuski - Oh it's still being worked on, we've just been crazy busy with some more backend stuff, so no new easily marketable material for a while. More environments in the works though, and we're looking forward to showing them off.

@Moontaz96 - Were actually using the UDK, not UE4. Modeling is in Maya and Zbrush

Moontaz96 Aug 17, 2015 @ 2:25pm
did you use unreal engine 4 to create this?
oh and what 3d modelling software did you use?
im curious to know cause the lighting is really good and thats something unreal 4 is known for

ExoCorps has been Greenlit and is now listed in the Steam store. For the latest information, purchase options, and discussions for ExoCorps, please see it on the Steam Store or in the Steam Community.
Visit Store Page
For more details Visit Community Hub
For latest discussions
If you really, really want to, you can continue to the Greenlight page. Information on this page may be out of date, since all the action has moved to the areas noted above.