Greenlight > Games > _K_o_S_'s Workshop
Greenlight is being retired. For more information on how to submit games to steam, refer to this blog post.
This item has been removed from the community because it violates Steam Community & Content Guidelines. It is only visible to you. If you believe your item has been removed by mistake, please contact Steam Support.
This item is incompatible with Greenlight. Please see the instructions page for reasons why this item might not work within Greenlight.
Current visibility: Hidden
This item will only be visible to you, admins, and anyone marked as a creator.
Current visibility: Friends-only
This item will only be visible in searches to you, your friends, and admins.
Football Tactics
Description Discussions2 Announcements5 Comments154 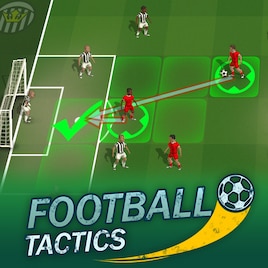 olexandr021
Offline
See all 7 collections (some may be hidden)

View Football Tactics in the store

Less than in a month after being greenlit we made it: we released Football Tactics in Steam!

Now we will concentrate on preparing the game for Steam. Hope to release it soon.

Football Tactics - is a tactical football manager with turn based matches. Create your own club, and turn it to a team of the champions!

The core of Football Tactics is tactics and intelligibility. You’ll be able to assess the opponent’s team, find weak and strong sides of it, and set an optimal squad against it. You’ll clearly see the consequences of your decisions.

It’s not the game about endless spreadsheets with millions of unintelligible numbers. You won’t have to guess, why your team won or lost. You’ll clearly understand, what every characteristics of a footballer means, and how it influences the game.

Our goal is to make the football manager, which is deep, easy to understand and feels real.

Need to release before Soccer Legends if you want my money guarenteed :)
ozmono

l_antenno Aug 20, 2015 @ 7:30am
The game appears silly but easy to become addict... reminding me of the childhood game "Captain Tsubasa". I'l buy a full version if it's cheaper.

artisticgoose Jun 6, 2015 @ 10:19am
Wow!!! This is different, This is looking pretty good, and the animation looks top notch! Going to keep an eye out for this! Keep the price down though please.

Football Tactics has been Greenlit and is now listed in the Steam store. For the latest information, purchase options, and discussions for Football Tactics, please see it on the Steam Store or in the Steam Community.
Visit Store Page
For more details Visit Community Hub
For latest discussions
If you really, really want to, you can continue to the Greenlight page. Information on this page may be out of date, since all the action has moved to the areas noted above.