Greenlight > Games > Afropenguinn's Workshop
Greenlight is being retired. For more information on how to submit games to steam, refer to this blog post.
This item has been removed from the community because it violates Steam Community & Content Guidelines. It is only visible to you. If you believe your item has been removed by mistake, please contact Steam Support.
This item is incompatible with Greenlight. Please see the instructions page for reasons why this item might not work within Greenlight.
Current visibility: Hidden
This item will only be visible to you, admins, and anyone marked as a creator.
Current visibility: Friends-only
This item will only be visible in searches to you, your friends, and admins.
Samsara
Description Discussions1 Comments41 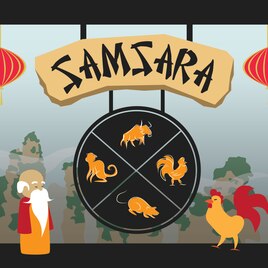 Mostafa
Offline
See all 4 collections (some may be hidden)
Kickstarter
Description
Release date: Summer 2016
An imperfectly incarnated Buddhist monk must come to terms with the duality of his own soul by traversing the Gauntlet of Enlightenment. Transform between different animals from the Chinese Zodiac to overcome a variety of harrowing obstacles. Push down walls as a mighty Ox. Glide over pitfalls as a noble Rooster. Or soar to the heavens as a majestic Dragon! Only when you have let go of your human soul will you attain Nirvana; only then will you break free of Samsara, the Wheel of Life!

A 2D platformer for the PC based around transforming between twelve different animals, Samsara is a game that blends mysticism, variety, and mechanics as metaphors to deliver a truly unique gaming experience. No two playthroughs will be the same, thanks to the ever-changing modular level design! Samsara challenges players to forge their own path through the Gauntlet by combining the abilities of different animals, all the while providing them a dynamic arena to explore the unique mechanics of each beast at the player’s own pace.

Features
Gameplay
In Samsara you have the ability to swap between different animal forms in order to traverse the Gauntlet of Enlightenment. This treacherous gauntlet is always shifting and changing, as we all are in life. At the end of the gauntlet you will reach enlightenment, thus freeing you from the endless cycle of Samsara.

While there are twelve animals in total, you will swap between four at a time. Every so often the animals you can swap between is changed and the level will shift and adjust itself to conform to your new abilities. Each animal has its own set of mechanics to traverse the deadly hazards! In order to quickly surpass all the obstacles ahead of you, you will need to master swapping between your various forms on the fly!

There are multiple ways through each level, and the level itself is randomly assembled, so each playthrough will be unique. As you go through the level, it will be shifting and changing based on the current animals you have access to. The Gauntlet of Enlightenment is a fickle beast; if you fail too many times it may get impatient and change!

Module Editor
We will be releasing the Samsara Module Editor which will allow you to create your own module packs that other users can download and play. This tool is the same tool we ourselves will be using to build modules, so you can bet it will be feature complete! It will be simple to use, but allow for a great degree of freedom, building your own traps and puzzles that you can pack together to put your fellow players through! The Samsara Module Editor will be fully documented so rest assured you won't be left in the dark as you one-up our official modules with your masterpieces. We will also be adding steam workshop support for easy sharing of your modules!
Popular Discussions View All (1)

Ronanfalcon Apr 20, 2016 @ 2:34pm
@Bunny, but I believe this animation was intentional from the author, based on the theme.

shadree May 18, 2015 @ 7:35am
Looks okay. A bit too plain-looking for my liking but not offensive. I think the animations need major polish though. I'm voting yes but it looks cheap.

Leon the Redux  [author] Apr 20, 2015 @ 8:11am
Thanks for all of the support! And cr34m3, the current plan is to create challenging puzzles within each module, the order of which we would then be able to randomize to create a unique play-through with each experience. Hope that helps!

cr34m3 Apr 18, 2015 @ 1:31pm
The yes vote is for an interesting idea with lots of potential. I really hope the devs make use of this as the implementation looks slightly lacking at present. Also, cleverly designed puzzles instead of modular, randomly generated ones may do the mechanics more justice. Just my 2c. :)
< >