Store Page
Space Engineers>  Workshop > Whiplash141's Workshop
This item has been removed from the community because it violates Steam Community & Content Guidelines. It is only visible to you. If you believe your item has been removed by mistake, please contact Steam Support.
This item is incompatible with Space Engineers. Please see the instructions page for reasons why this item might not work within Space Engineers.
Current visibility: Hidden
This item will only be visible to you, admins, and anyone marked as a creator.
Current visibility: Friends-only
This item will only be visible in searches to you, your friends, and admins. 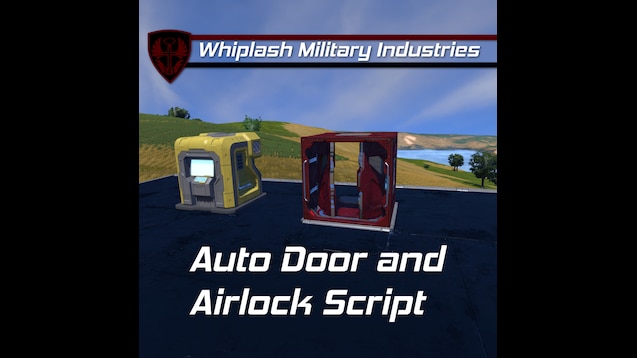 This item has been added to your Subscriptions. Some games will require you to relaunch them before the item will be downloaded.
In 1 collection by Whiplash141
Whip's Scripts

Description
"Sure, I could turn around and close the door like a civilized man.
Or I could let a robot do it for me... like a modern man."

- Acarii on the virtues of automatic doors

This script will close any door once it has been fully open for over 3 seconds (10 seconds for hangar doors). The duration that a door is allowed to be open is independent of the status of any other doors. This is to say that if I open one door at a certain time then open another door a second later, each door will stay open for 3 seconds, then close. This script also supports an INFINITE amount of simple airlock systems.

Instructions
If you don't want/need the airlock functionality, only step (1) is necessary!

Auto Door Closer
The script will fetch ALL doors on the grid and automagically close any
door that has been open for a set number of seconds. Doors can also be excluded from
this feature.

Changing the Auto-Close Interval
You can change the auto close interval one of two ways:

Excluding Doors:
Add the tag "Excluded" anywhere in the door's name to exclude it from auto closing. Hangar doors are excluded from auto closing by default, but you can change that in the Custom Data of this programmable block.

Airlocks
This script supports the optional feature of airlock systems. Airlock systems are composed of AT LEAST one Interior Door AND one Exterior Door. The airlock status lights and sound blocks do not affect the functionality of the doors so if you don't have space for them, don't fret :)

Custom Data Configuration
I've rewritten this code (yet again) to support Custom Data configuration. This means that you do not need to touch any values inside of the code.

Author's Notes
This script has been rewritten (on 2021/02/22) to support Custom Data configuration. The script is still very performance friendly, and this should make configuring stuff much cleaner since you no longer need to edit variables in the code.

This is/was my first script, I hope y'all enjoy! :)

Thanks to LordTylus for the script in his Self-Maintaining Survival Ship (no longer available :( ) that I based the logic of the auto door closing on. (Very spiffy design :) )

If you have any questions, comments, or concerns, feel free to leave a comment.

(Do not reupload without permission, not even to mod.io)
Popular Discussions View All (8)

jglenn1562 Apr 7 @ 12:25pm
Is there an alternative script or a way to change it so that I got to add a tag to include doors, and not exclude?

Dekiru Mar 6 @ 11:23am
On my previous comment, I renamed my "Offset Door" to "Sliding Door" and recompiled the script then it detected the doors.

Dekiru Mar 6 @ 11:19am
Hi there Whiplash, long time fan of your scripts. Unfortunately it seems like the script does not work with DLC doors. All my doors has the custom data automatically added, but the airlock part does not detect the offset doors. How could I go about fixing it?

Whiplash141  [author] Mar 6 @ 10:41am
No it doesn't and no I'm not adding air vent support. Simply set your airlock to always depressurize.

I really couldn't care less what other scripts do, so that is not compelling. This script works precisely how I want it to; quick and simple. No convoluted setup or implicit time delays.

Typhon Plume Mar 6 @ 4:29am
Just to add on, that reason and others is why every other airlock script and system involves controlling the air vent for a better airlock.

Typhon Plume Mar 6 @ 3:17am
Well no vent control for depressuring the lock, means loss of oxygen and if someone does it right, there going to be yeeted from the ship into space. Might want to rethink the air vent part.

Whiplash141  [author] Mar 5 @ 5:10pm
It stops you from spacing your ship. It is a _simple_ airlock system as mentioned above.