Store Page
Cities: Skylines >  Workshop > MazK's Workshop
This item has been removed from the community because it violates Steam Community & Content Guidelines. It is only visible to you. If you believe your item has been removed by mistake, please contact Steam Support.
This item is incompatible with Cities: Skylines. Please see the instructions page for reasons why this item might not work within Cities: Skylines.
Current visibility: Hidden
This item will only be visible to you, admins, and anyone marked as a creator.
Current visibility: Friends-only
This item will only be visible in searches to you, your friends, and admins. 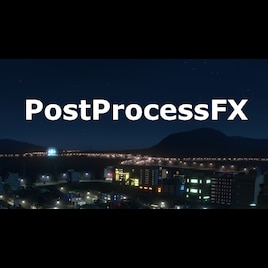 MazK
Offline
See all 13535 collections (some may be hidden)

This item has been added to your Subscriptions. Some games will require you to relaunch them before the item will be downloaded.
Description
Enable additional post processing effects such as bloom, lensflare, different anti aliasing options and ambient occlusion.

Bloom and lensflare
Can be fully controlled with the ingame UI with the following settings:

- NOTE: Temporal only works with bloom enabled (You can set intensity to zero and have to toggle bloom once after enabling temporal).

Not as effective as the DynamicResolution mod, but cheaper and can be combined if desired.

Screen Space Ambient Occlusion
This is different implementation then the other SSAO mod, so chose one depending on preference.

- Intensity: How much the surfaces are darkened.
- Radius: Controls the spread of the occlusion.
- Sample Count: The amount of samples taken around each pixel, impacts performance.
- Occlusion: Either depth or depth + normal is used, looks slightly different.
- Enable Downsampling: Only sample at half resolution, impacts performance.

Additional Information
All effects can be disabled so they don't have any performance impact. An ingame UI is provided to tweak the options and can be toggled with F9 (default), the toggle key can be changed in UI. Here[pastebin.com] is a list of possible keycodes, fill in the string and not the corresponding number.

Changelog v1.9.0
- Made compatible with Cities Skylines v.1.9.0.
- Attempted to make it work on Linux and OSX, but I cannot test that.

Recommended and Compactible Mods
The DynamicResolution and SunShafts mods are other great enhancements.
Popular Discussions View All (2)

gamophyte Jun 23 @ 3:23pm
Render It was very visually buggy when I tried it, this is still king, and I've not had any issues with it. That said, I plan to go back and try Render It again in the future, as it is as least active.

CiobbyFx Mar 2 @ 9:09am
@ 拆房子找蛐蛐 make sure you hit the "SAVE" button under "Global" tab. For me, SSAO settings are reloading just fine.

拆房子找蛐蛐 Feb 20 @ 12:11am
Ask the boss a question: postprocessfx v1 9.0 why can't the mod save the setting parameters? Every time you log in to the game, it is the default parameter~

0specgamerdad Feb 5 @ 11:55am
dont have issues with this mod

StayHungryStayFoolish Feb 1 @ 12:53am
Do not use this mod. It has errors in it, old and abandoned. Use Render it!

mrknack Jan 31 @ 4:16pm
Any idea how to fix the Bloom error? I simply cant use this option at all.

PlayerOneTimmy Jan 13 @ 11:17am
Works fine on Linux, no issues with any effect or saving/loading settings but you'll need to remember to hit the Save button in the Global tab to keep your settings between gaming sessions

StayHungryStayFoolish Nov 30, 2021 @ 8:24am
I have the same issue. Bloom is not working. The Debug Output says that the 3 config XML files were failed to load: bloom, aa, and ambientocclusion.