Greenlight > Games > bluemoon's Workshop
Greenlight is being retired. For more information on how to submit games to steam, refer to this blog post.
This item has been removed from the community because it violates Steam Community & Content Guidelines. It is only visible to you. If you believe your item has been removed by mistake, please contact Steam Support.
This item is incompatible with Greenlight. Please see the instructions page for reasons why this item might not work within Greenlight.
Current visibility: Hidden
This item will only be visible to you, admins, and anyone marked as a creator.
Current visibility: Friends-only
This item will only be visible in searches to you, your friends, and admins.
AstroKill
Description Discussions0 Announcements4 Comments72 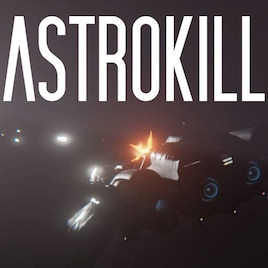 bluemoon
Offline
See all 9 collections (some may be hidden)

View AstroKill in the store

AstroKill has finally been Greenlit! The game has progressed dramatically since its original submission. The placeholder ships and asteroids have been replaced with two new fighters and some very nice asteroid geometry. Guided missiles have been implemented. Original music has been added. Virtually every aspect of the game is continuously being refined. New screenshots have been posted showing off some new spacecraft. Capital ships are coming soon...

A black hole is shown briefly. While the intensity of the gravity is not realistic (because it wouldn't be fun), the tug of the gravity is enough to have an interesting effect on gameplay. It's possible to use its gravity to change direction and increase speed. But, don't get too close! There is a point where your thrusters won't be enough to save you.

The Gravity Shield is also shown briefly. You can hear a "whirring" sound when it's activated (about a minute in). Afterwards, you'll see the attacker's bullets curve away from my ship as the shield pushes all objects away. Pretty slick!

Machine guns, homing missiles, and good ol' flak
Weapons in AstroKill deliver old-school, fast-flying chunks of metal down range. Projectiles fly endlessly as long as hitting a target is a possibility. That means, your effective range is virtually infinite. Bullets damage ships based off their impact-angle. Sharper angles do more damage. If the angle is shallow, the bullet will ricochet off its target, possibly hitting another target. Some projectiles are explosive rounds, like those fired by the 60mm flak cannon. Flak ammunition automatically explodes when in proximity to a hostile, doing both area damage and applying a radial force to all nearby objects. Homing missiles automatically lock on and intercept enemy targets.

Old-school violence
Pilots in AstroKill are fair game after you destroy their ship. You'll find them helplessly flying through space in the midst of battle. Chase them down and finish them off!

Realistic thrusters
Each thruster moves your spacecraft by applying a linear force to it via Unreal's physics engine (PhysX). Thrusters can be damaged by projectiles, rendering them ineffective while they reset. When braking, thrusters are fired automatically by the flight-control system to bring your ship to a stop. While true to real-life physics, the controls in AstroKill remain intuitive and easy to learn.

Challenging AI
The AI in AstroKill provides a very challenging experience without breaking any of the established game-rules. Meaning, the AI must control its thrusters, rotate its ship, and fire its weapons under the same constraints experienced by the player. Because its playing by the same rules, its movements are very human-like. The AI can be tuned to behave like a beginner, an ace, and anything in between. Also, they can be configured to favor certain weapons over others and attack from a preferred angle and distance. They will even go Kamikaze if they run out of ammo.

Team Deathmatch
Currently, the default game-mode is singleplayer Team Deathmatch (more game-modes are on the way). Your teammates are AI-controlled fighters that will form up on their squad-leader (you) until an enemy squad is encountered. Once encountered, the AI will break out and engage targets as they see fit.

Gravity Shield
This newly implemented shield uses "negative" gravity to push projectiles away. When activated, any projectiles entering the space around your ship will be affected. Bullets will curve away from you! The shield's effect diminishes while it's active, and you cannot fire your own weapons while it's on.

Spherical minimap
The minimap in AstroKill depicts the 3D-direction of both friendlies and hostiles relative to your own orientation. For example, a hostile appearing at the top of the sphere always means its above you.

Upcoming features
The following is a list of features I'm planning to roll out in the next few months. I'll be posting regular updates on my progress. If you have any suggestions with regards to new functionality, I'd love to hear them.
< >
72 Comments

bluemoon  [author] May 8, 2015 @ 11:50pm
robert.blane, the system specs are pretty light. I'm able to run the game comfortably on a laptop with an i7 cpu and 8GB of RAM. As long as you have a dedicated GPU and your hardware isn't super old, it should run perfectly fine.

robertblane May 5, 2015 @ 4:01pm
Agree with SirDannyMacFinn, bloom effect are OTT and should be either toned down or can be adjusted through graphics options. This game looks similar to PARAGON with good old eighties easthetics.

KDStudios (Dan) Apr 28, 2015 @ 11:58am
The game looks genuinely fantastic. The combat looks like what I expect a true space battle to look like. This game has huge potential.
I'd love to be able to play this if you ever need a tester.
I've been testing alpha games for years and also feature some of them on my YouTube channel.
Voted Yes, Favourited and Following.
Seriously, good luck! I can't wait to play this.

AstroKill has been Greenlit and is now listed in the Steam store. For the latest information, purchase options, and discussions for AstroKill, please see it on the Steam Store or in the Steam Community.
Visit Store Page
For more details Visit Community Hub
For latest discussions
If you really, really want to, you can continue to the Greenlight page. Information on this page may be out of date, since all the action has moved to the areas noted above.