Greenlight > Games > Team21's Workshop
Greenlight is being retired. For more information on how to submit games to steam, refer to this blog post.
This item has been removed from the community because it violates Steam Community & Content Guidelines. It is only visible to you. If you believe your item has been removed by mistake, please contact Steam Support.
This item is incompatible with Greenlight. Please see the instructions page for reasons why this item might not work within Greenlight.
Current visibility: Hidden
This item will only be visible to you, admins, and anyone marked as a creator.
Current visibility: Friends-only
This item will only be visible in searches to you, your friends, and admins.
Dungeons of Aledorn
Description Discussions3 Announcements3 Comments243 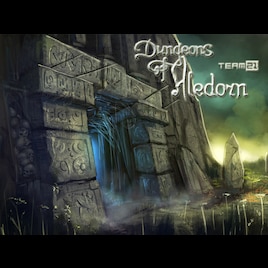 Dungeons of Aledorn (DoA) is an RPG game that brings back several time-tested principles in a mixture of fantasy RPG/Dungeon. It´s primarily made for (and from) hard-core gamers and those who prefer games with high challenge level.

Exploring mode
As we’ve already mentioned, our game has three basic features. Firstly, in the exploration GUI, you´ll get the chance to experience the world of DoA from the first person view in the same way as it was common for many classical dungeon crawlers. This GUI will serve for most of non-combat actions such as exploration, opening of treasure chests, searching for secrets, interaction with NPCs, collecting of herbs etc.

Travelling mode
The second GUI will “accompany” you during numerous travels between game’s locations. We´ve decided to avoid the profaned vast generic “open-world filler" creation so that we could invest more time and resources into improvements of the main game locations. This way, we´ll be able to make each of them more unique and unforgettable such as the locations from Baldur’s Gate or Fallout series used to be. Apart from these fixed locations await you countless random encounters and secret areas which add to the player’s feeling of being a part of a rich and living world.

Camping mode
An interesting part of travelling is the management of camping. When your characters need to stop for a while in the open, they may be assigned various actions via the camping management GUI. The results of these actions will strongly affect party members’ statistics, possesions and overall group´s performance.

Combat Mode
The third (and for us also the most challenging and important) feature of DoA is its combat system. Combat GUI combines the isometric view and bird´s eye perspective to offer the maximal battlefield overview. The combat system of DoA also strives to get as close to the reality as it´s only possible. We want to avoid unnecessary frustration caused by restrictions of our combat system. We are especially proud of our battlegrounds. There are almost no predetermined battlegrounds for the duels that await our players. Combat GUI will place all party members and enemies at the same spot they were standing at just before the combat commenced. That means, clever maneuvering and decisions in the exploration GUI may put you into advantageous position at the beginning of combat and everything you see during exploration will be present and potentially usable during the fighting.

Party creation
Apart from that, you may expect all the fun stuff of a classic RPG such as: party creation (with unique races and class selection), complex system of attributes, perks and skills, NPC with branched dialoque options, magic, alchemy, complex quests with multiple solutions and outcomes, detailed inventory management and difficulty settings, that apart from challenge level directly enable/disable many hardcore gameplay features.

DoA will be a combination of puzzles, branched dialogue options, tactical turn-based combat, quest-solving and last but not least intriguing and complex RPG-system. We were inspired by several masterpieces of the RPG/dungeon and strategy genre. Namely: Betrayal at Krondor, Realms of Arcania: Shadows over Riva, Might & Magic, King's Bounty and Fallout series.

About Team 21
Team 21 is a newly formed indie studio that strives to return to gamers the quality of classic game masterpieces. The team is working hard in their headquarters - complete with in-house audio and motion capture facilities - to create a challenging, fun and balanced games mainly for the hard-core player.

WE ARE ON KICKSTARTER NOW! PLEASE COME AND SUPPORT US!
Popular Discussions View All (3)

Something new, something small, something great
BloodFlowers
< >
243 Comments

Team21  [author] Sep 23, 2015 @ 7:11am
Hey guys, thanks for your interest. Yes still developing. Until the end of the year we would like to have completed alpha version of the game.