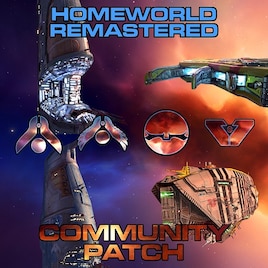 Death's Executioner
Offline
See all 9 collections (some may be hidden)

This item has been added to your Subscriptions. Some games will require you to relaunch them before the item will be downloaded.
Description
DO NOT USE THE ACE MAPPACK OR THE BG Mappacks. The mod has edited versions of these maps folded into it by default. These maps are not affiliated with the mod so All credit for those maps go to their original makers.


This mod is 1 part nostalgia trip, and 1 part balance.
Community Patch TOTALLY SCRAPS the "gameplay" featured in HWRM and 2.3, instead CP focuses on the grass roots of homeworld's classic gameplay.
As any Homeworld 2 or Homeworld 1 Class player will tell you, RM is not Homeworld.

CP does have a heavy bias towards Homeworld 1's scaling and how things worked, but it still restores several features
from BOTH Homeworld games that were cut out of/or forgotten in HWRM, examples below:

Hw2:
Capturing of Motherships, shipyards and other units.
Multiplayer Unit trading for ALL units including "Production units".
Fixes several bugs including but not limited to, sound bugs, visual weapon-fire bugs, issues with units turret traverse speeds being to slow for the intended role/unit type thus not allowing the unit to fire.
Restoring the Ability for the defense field frigate to fire its gun.
Restored classic unit caps for hw2s factions.
Restores upgrade levels and research trees.

Hw1:
Sensor Arrays for hw1 factions will reveal all Super Capital class ships permanently throughout the map (so long as the array isn't destroyed)
Restoring almost all unit caps and limits for the hw1 factions. (had to limit the Taiidan defense field frigates)
Restores classic Kamikaze AND scuttle damage and blast ranges for all ship sizes. Default RM has these ratios all over the place, some things are over powered, while others are hilarious under-powered.
Restores Unlocks and tech pathing/research trees for hw1 factions.
Restores unit Speed, health, and damage scaling like what was featured in classic Hw1.
HEAVILY increased the Multiplier for having more than 1 research ship/module to restore the benefit of building multiple research ships as hw1, seeing as we cant research multiple techs at the same time.
Restored Taiidan Defense Field frigates ability to ONLY block projectile cannon & plasma instead of being like a hw2 shield frigate, as we have in default HWRM/Most mods. They will NOT block Missiles OR Ions/Beams, just like it was in classic.


Generic Balance compromises:
I adjusted the resources on Hw1 Maps to have the Homeworld 2 values. players shouldn't run out of RU in 3 seconds anymore.
I had to add a level 1 armor and speed upgrade for hw1 faction units to keep them competitive.
I also had to lower the Hit points of all Super capital ships, as they used the Hw2 system. and Hw2 always had crazy insane game breaking super-capitalships that made all other unit classes pointless. 1 good side-effect of this fix was that frigates became meta and core/useful units again without me having to touch/edit the frigates.
Increased Hw2 Resourcing rates slightly, and changed their build speed upgrade research from a + 25 to +30% speed to help them compete with hw1s production.
Increased Hw2 Corvette and Fighter HP slightly to help them compete with Hw1 factions.
Had to add RU cost to Hw1 factions researches to even/balance them out with Hw2 factions progression.
Had to Increase the hell out of the speed for super capital ships.. Again as im using the HP/Speed scaling Ratios from hw1 for this mod, the HW2 style of doing things was WAY out of place.
Super capital speed went way up from what it was, and HP came way down. But this was a good change, and the combat/gameplay feels much better because of it.
It wasn't possible to get Defense fighters to shoot down Projectiles, so their weapon now shoots down missiles.

Other:
This mod also adds in a April fools faction. The 'Turanic Raiders'. They are NOT a serious faction or meant to be played in multiplayer competitively. The only reason they aren't disabled is because i was begged/harassed into leaving it enabled. The back story on this is; it was meant to be an April fools joke that eventually turned into a request to be a Map-Hazard for role playing & tournament games.
That coupled with the fact i was begged to leave it in, lead me to keeping them enabled.


This just scratches the surface and sadly i cant cover everything changed due to description text limits, so give the mod a try and see if ya like it.

SuwinTzi Apr 27 @ 12:36am
Is there a master list of changes? I'd like to compare this patch to the Players Patch.

Death's Executioner  [author] Oct 26, 2019 @ 12:05pm
they have been in CP sense the truanics were first added years ago. Im not sure how you missed them tbh, but now that you know they are there, go make em and have some fun! =P

Death's Executioner  [author] Oct 26, 2019 @ 12:03pm
@melongrubber thats what the Turanic platforms are, they are from the graveyard. and they are already in the mod. they have both anti fighter (small auto gun) and anti frigate (large auto gun).

Wambat Oct 22, 2019 @ 10:58pm
How would you feel about adding a production unit to the Turanic Raiders? There are stationary gun pods in the junkyard mission of HWR. While I suppose these are meant to be Taiidan, aesthetically they look more this Turanic tech. Moreover, it would hardly be fair to provide the Taiidan with stationary turrets (or "move once turrets") and not the Kushan. Since HWR2 factions have these turrets, I expect it would be relatively simple to copy and paste the HWR gun pod exterior onto a HWR2 turret. This would give the Turanic a little more of interest when included in matches, and, I think, would just be fun to see.

Death's Executioner  [author] Oct 16, 2019 @ 4:17am
Their will be some changes in campaign, but overall the focus is on MP.
long ago before the 2.0 update the mod did fix many bugs in campaign, but once 2.0 came out it wiped out all those changes as i had to rebuild the mod from scratch. i never got around to trying to add the fixes back back in.

That being said, their are some Easter eggs in the hw1 campaign. you will want to start salvaging ships as early as possible. thats all im gonna say =P

Wambat Oct 16, 2019 @ 12:20am
Is this mod meant to be balanced more for the single player, or multiplayer? I prefer playing the campaign. Will I find my campaign more or less balanced by use of this mod?

Attorney at Meme Oct 14, 2019 @ 5:21pm
Maybe I'm seeing things, but it seems like there's a lot more resources on maps. Is there a full change list (on one page) anywhere?

Attorney at Meme Oct 13, 2019 @ 1:23pm
Tried it. So far, very nice. Really good call on changing the icon tactics and stances around. I noticed ship production time was faster. At first I thought this was bad, but then quickly noticed that "oh wow, getting fighter fleet organized and ready is a lot smoother". Have to agree with way you did cost productions as well. Oh, and the tech tree additions are nice touch. I like how logical and this mod is. It even provides the maps that I like. A+++