Greenlight > Games > Gamestorming's Workshop
Greenlight is being retired. For more information on how to submit games to steam, refer to this blog post.
This item has been removed from the community because it violates Steam Community & Content Guidelines. It is only visible to you. If you believe your item has been removed by mistake, please contact Steam Support.
This item is incompatible with Greenlight. Please see the instructions page for reasons why this item might not work within Greenlight.
Current visibility: Hidden
This item will only be visible to you, admins, and anyone marked as a creator.
Current visibility: Friends-only
This item will only be visible in searches to you, your friends, and admins.
Face It - A survival game to fight inner demons
Description Discussions4 Announcements3 Comments86

Gamestorming
Offline
See all 10 collections (some may be hidden)
Kickstarter

Now you can visit the store page and buy the game while it's still cheap. As we add new features, the price will rise. Game on!

Hello, guys. Just let you know that we are running a campaign on Kickstarter to make Face It even better. The more funds we get, the better the game will be. Take a look at the Kickstarter page, play the Pilot Version for free, and please, consider pledging: http://kck.st/1OBZBgy

Now that we got the greenlit, the plan is to release on Steam as early access, where the game should be for 4 to 6 months. Regarding the pricing, the Early Access will cost $12 on Steam. But if you pledge only $10 on Kickstarter you will get the very same Early Access Steam Key. If you wait until after the Early Access you will have to pay $15. 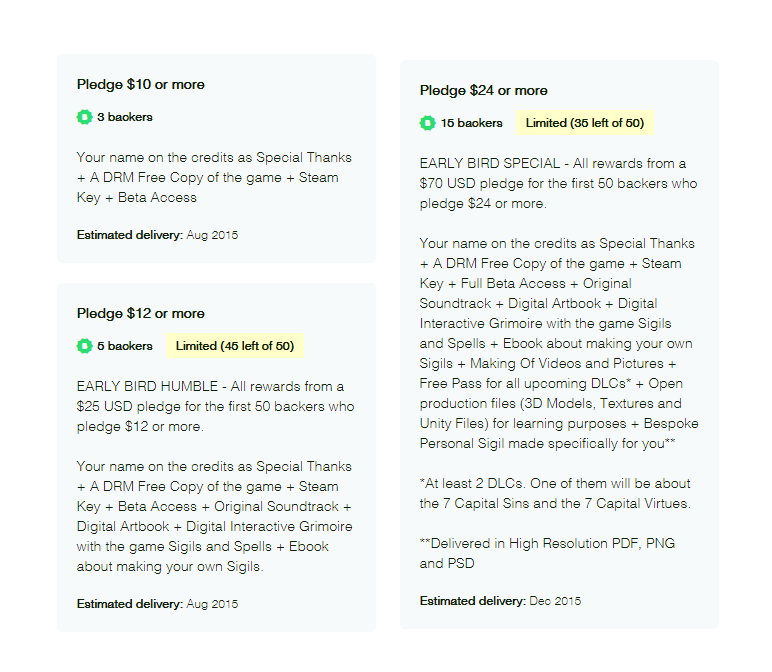 Also, if you are one of the first 25 to pledge $12, you will get the Early Bird Special Rewards. For the same price you would get on steam later, you will also get Soundtrack + Artbooks + Digital Interactive Grimoire + Ebook (All of them will be DLCs on Steam)

The best way to describe our project, and what we are trying to achieve with it, is by letting you play it for free.

In our Pilot Version (demo), you will deal with two Game Worlds: the first game world is called "Solus in Tenebris", and it has 10 entire levels for you to play.

The second one is called "FACE IT", which gives the name to the game itself, having only one very long level, with an experimental gameplay, a very dark, deep and difficult one.

It's the very first level designed in order to show what kind of game we were trying to build.

Cick to Play in your browser [dl.dropboxusercontent.com]

FACE IT is a game about facing the most challenging feelings of the human experience. Through game design techniques, the levels are made to invite you to make a magical and metaphorical trip to your subconscious thoughts and deal with your inner issues.

FACE IT uses a dark atmosphere combined with classic platform mechanics and survival dynamics, to bring the feeling of wandering in the deepest and darkest places of the mind and soul. 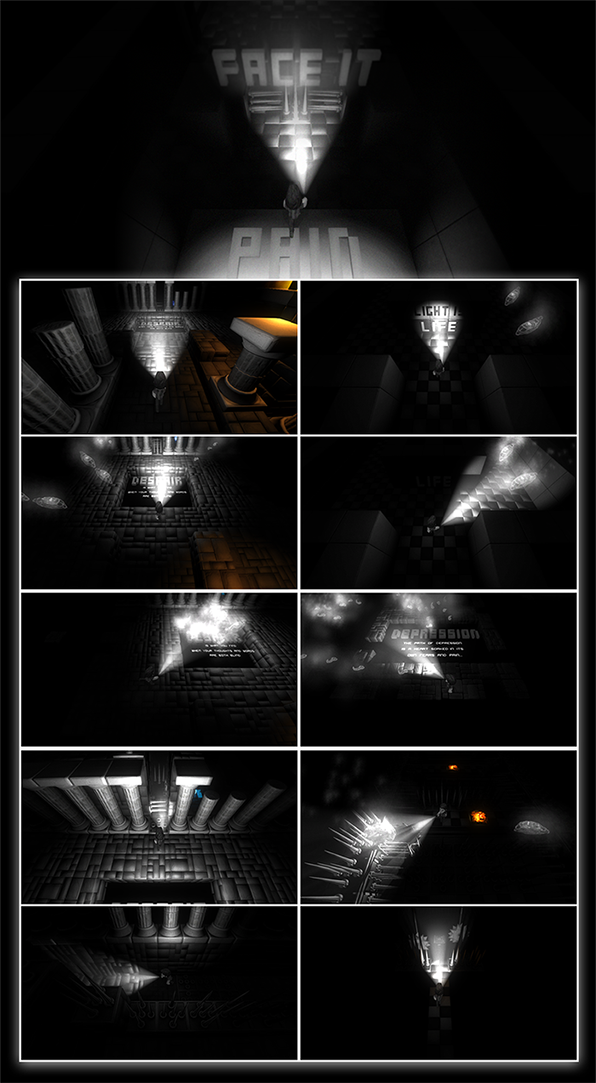 In the game, each world represents some dark aspect of human consciousness, like Fear or Attachment. By beating a level, you shall find brighter states of mind, like Love or Truth.

As you might pass through the levels, you may unlock the magical sigils and symbols that represent those new brighter states of mind and unlock the keys for the levels from the Darkest World.

As well as many contemporary magicians, we practice magic as a tool for self-knowledge and self-improvement.

The practice of magic is taken through in order to achieve changes in consciousness. And to do so, we use the matter of which Thinking itself is made: the language.

Instead of trying to change reality throughout some sort of supernatural power, our intention is to make the best use of language to change ourselves, and through the actions of our new selves, achieve changes in the reality around us.

"Art is, like magic, the science of manipulating symbols, words, or images, to achieve changes in consciousness. The very language about magic seems to be talking as much about writing or art as it is about supernatural events. A grimmoir for example, the book of spells is simply a fancy way of saying grammar. Indeed, to cast a spell, is simply to spell, to manipulate words, to change people's consciousness." – Alan Moore

We really do believe gameplay is magic. Making and playing games are the most powerful tools to achieve changes in consciousness.

In modern video games, we are able to get immerse in virtual worlds made for us to challenge ourselves. We become able to experience fear, frustration and hope, in ways we are often afraid of. Things that might compel us to take higher challenges and to do so willingly are very powerful tools for the mind!

“Scientists have demonstrated that dramatic, positive changes can occur in our lives as a direct result of facing an extreme challenge – whether it’s coping with a serious illness, daring to quit smoking, or dealing with depression. Researchers call this ‘post-traumatic growth.'” – Jane Mcgonigal

Games might trick the subconscious into accepting states of mind that we usually don't learn how to deal with, because we are too busy trying to avoid them.

FACE IT tries to bring up those states of mind so the player can learn how to face them.

We are making this game so it can help both audience and developers to fight their inner demons and discover (and create) their very true selves.

The sigils are symbolic representations of the magician's desired outcome. They are symbols created to cut through the walls of the conscious thought and affect directly the unconscious mind. It's at some extent, similar to subliminal messages.

One of the techniques we use to create sigils is a Sigilization method created by Austin Osman Spare, who was a magician, as well as a painter and graphical artist. The technique consists in writing spells with your intents, and agglutinate the letters to reduce the written statements in abstract symbols. The conscious mind may not remember the meaning of the symbols, but the subconscious keeps the memories about the symbol being made. This way, the symbols and their intents charge each other, exponentially increasing their influence on the mind.

The spells are poems or rhymes that represent the changes we intend to make on consciousness. While sigils appeal to the subconscious mind, the spells (much like prayers and mantra), work with the conscientious will and with our propensity to assimilate concepts by repetition.

A Message For The Devs
TheDino-Kun
< >
86 Comments

javierucu Feb 5, 2016 @ 12:37am
hi, i think Face it looks fantastic. I love horror, hehe. Now i´m finishing the soundtrack in other game and it would be great to work beside such a promising team. I think my music could fit well in your project. You could listen here: https://www.youtube.com/watch?v=pA7fQzZ9gUU What do you think? my email is: cga.sound@gmail.com Thank you. Good Job.

caramida9 May 4, 2015 @ 11:32am
Yo guys... I just went ahead and grabbed the demo version and gave it a try. I have to say that the game looks very cool and original(for a platformer). I also loved the voice acting, it was pretty professionally made. The game was slightly harder than initially expected, with some puzzles not being intuitive right away, but I did manage to finish the demo, and it was very satisfying. I did a small let's play video of it, if you're interested in the game or my reaction, here it is: https://youtu.be/djQOgNHMb0A . I also love games that have a deeper, artistic meaning, and I'm really curious what you guys can come up with for this one. So keep up the good work...

Gamestorming  [author] Apr 3, 2015 @ 11:46pm
Hello, guys. Just let you know that we are running a campaign on Kickstarter to make Face It even better. The more funds we get, the better the game will be. Take a look at the Kickstarter page, play the Pilot Version for free, and please, consider pledging: http://kck.st/1OBZBgy
< >