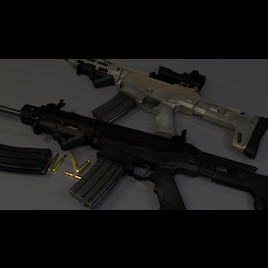 Alwarren
Offline
See all 4840 collections (some may be hidden)

This pack contains a collection of modern and not-so-modern firearms and weapons that are rarely used by regular armies, or are used by armies not contained in the base Arma 3 game. Originally, this was supposed to be the FHQ Remington pack, a re-release of the original FHQ Remington Pack for Arma 2. However, I decided to re-model some of the stuff in that pack, and ended up throwing it all away (except for the ACR, but I re-made all the textures). There were, however, other weapons I wanted to make, which didn't exactly fit into the pack, so I decided to make this a bit more varied and not restricted to a single manufacturer.
The current version contains the following weapons:


This pack requires joint rails, now integrated into CBA, and is compatible with our FHQ Accessory Pack ( http://steamcommunity.com/sharedfiles/filedetails/?id=388697912 )

More variants and weapons will become available over time.

Since this question comes up again and again:
In order to use these weapons, a mission or game mode (either single- or multiplayer) must either support the weapons directly, i.e. provide them in the mission, or it must have some sort of choose-your-weapon loadout option. The latter category are missions that have an unrestricted VAS or access to the Virtual Arsenal. If these are not present, there is no way to use the weapons in this mission other than editing the mission yourself. This is a limitation/feature of the Arma game and applies to all weapon mods that aren't replacements.

If you want to test the weapons, go to Learn->Virtual Arsenal, and pick one of them from the list of rifles.

Special request and report Bug From IMI GALIL 7,62
Over

philpip31 Jan 15, 2020 @ 8:30pm
I noticed in the arma 2 version there was a Remington MSR. Hopefully you plan on adding that to arma 3, its my favorite sniper rifle. The different caliber configurations on the MSR (.338, .300, 7.62) could make for some interesting engagements as well. Thanks for this awesome pack and keep up the great work!

IceDiryi Dec 31, 2019 @ 3:59pm
with antistasi do these start spawning by themselves or do i have to somehow make them spawn in the game