Greenlight > Games > Yossarian's Workshop
Greenlight is being retired. For more information on how to submit games to steam, refer to this blog post.
This item has been removed from the community because it violates Steam Community & Content Guidelines. It is only visible to you. If you believe your item has been removed by mistake, please contact Steam Support.
This item is incompatible with Greenlight. Please see the instructions page for reasons why this item might not work within Greenlight.
Current visibility: Hidden
This item will only be visible to you, admins, and anyone marked as a creator.
Current visibility: Friends-only
This item will only be visible in searches to you, your friends, and admins.
Flub Fighter
Description Discussions2 Announcements6 Comments35 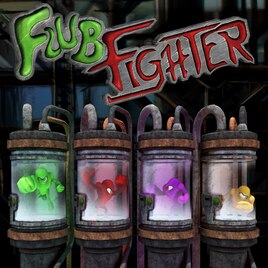 Sniperace
Online
See all 3 collections (some may be hidden)

View Flub Fighter in the store

We have been Greenlit!

We are going to work to get some updates into the game, make sure it is all working and aim towards a release. We will let you more information when we have a timeline in place.

Hello all of our Flubs and Flubettes! The team has been working hard and we are happy to announce that we have made some major chances and updates! So.... whats new?

- Two brand new levels with new traps!
- Rework on all previous levels making them more Fun!
- New level specific hazards (including a trouser snake with a taste for Flubs)

-Updated controls and physics!
-New ITEMS! (including a Flub Seeking Missile)
-New Player Schemes and identifiers so you know your Flub!

So what does that mean for Flub Fighter? Well we are working towards release and are looking to have the game available to you at the end of the year. We also posted a new video for all of you to enjoy. So Flub on my friends.

Read More
Description
Description
Flub Fighter is a 3-D, action-party game where up to four players fight against each other for flubby dominance. Flubs cannot be harmed through punching alone; only a well-placed trap or punch that send a Flub flying into dangerously placed lethal hazards can score kills.

Players can utilize a one-button, multi-directional punch system to knock opponents back and to maneuver around levels. Tapping the button delivers a short-ranged, light punch. Holding down the button charges up your Flub and allows for a powerful punch that sends you and your opponent flying.

In addition to punching, players can collect items during a match to hinder opponents. Items can be thrown directly at opponents, or be placed on the environment as traps.

To achieve victory, players will need to outsmart opponents and stay on their toes in the face of dangerous, hazard-filled environments.

About Team
The Flub Fighter team is mainly composed of a small group of current UAT students and several alumni.
You can learn more about the team and production at http://www.retorablack.com/flubfighter/
Popular Discussions View All (2)

Flub Fighter has been Greenlit and is now listed in the Steam store. For the latest information, purchase options, and discussions for Flub Fighter, please see it on the Steam Store or in the Steam Community.
Visit Store Page
For more details Visit Community Hub
For latest discussions
If you really, really want to, you can continue to the Greenlight page. Information on this page may be out of date, since all the action has moved to the areas noted above.