Store Page
Killing Floor >  Workshop > kamikaze4kanojo's Workshop
This item has been removed from the community because it violates Steam Community & Content Guidelines. It is only visible to you. If you believe your item has been removed by mistake, please contact Steam Support.
This item is incompatible with Killing Floor. Please see the instructions page for reasons why this item might not work within Killing Floor.
Current visibility: Hidden
This item will only be visible to you, admins, and anyone marked as a creator.
Current visibility: Friends-only
This item will only be visible in searches to you, your friends, and admins. 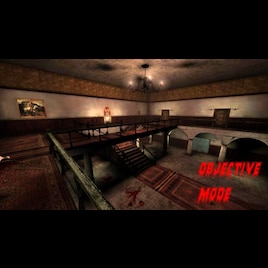 kamikaze4kanojo
Online
See all 146 collections (some may be hidden)

Return to the great Spencer mansion from Resident Evil / Biohazard once again to find those Crests for the last bloody time!

The Story version of this map was originally released in 2010, but eventually became unplayable after a series of official patches.

But by popular demand, it is now back - and with a vengeance! Made extra challenging for the veteran Killing Floor teams.

For those who have trouble with the initial objective (before fighting starts). I would think simply walking around the room you start in would be enough for most people to get it. But anyway, here's a hint. Look at comments posted 3rd March 2015.

Features:
-Story character lines complete with mugshots of your favourite old Resident Evil characters
-Features Fel's Chaingun, if you're hard enough
-Choose the theme for your nightmarish mansion inhabitants, every time, regardless of server settings!
-Enough ammo for everybody this time! Just 1 box of super ammo and you'll be ready to take on an army
-Unique zombie spawning is a mix of random spawns and scripted sequences
-Thanks to Fallidel's trigger pack, there's a few fun twists here and there
-Enjoy some unique load outs as the weapon offerings are escalated as the map goes on. You can also opt not to pickup the hand grenade if you have plans for that +1 inventory.
-Patriarch is tough as nails, so all 6 of you simply holding your ground and unloading your AA12s just aint gonna cut it

Positive vibes ~ PT Oct 12, 2021 @ 3:35pm
I miss this map, wish kf1 was still alive, this the obsidian i think and amnesia objective maps are amazing..
Id cry rivers if this ever got added to kf2

kamikaze4kanojo  [author] May 13, 2020 @ 2:15pm
no the map works for everyone else, suggest you take the crash report somewhere that deals with support issues. Of course I'd suggest get a fresh copy of the map and disable other mods you might be running.