Greenlight > Games > minhta's Workshop
Greenlight is being retired. For more information on how to submit games to steam, refer to this blog post.
This item has been removed from the community because it violates Steam Community & Content Guidelines. It is only visible to you. If you believe your item has been removed by mistake, please contact Steam Support.
This item is incompatible with Greenlight. Please see the instructions page for reasons why this item might not work within Greenlight.
Current visibility: Hidden
This item will only be visible to you, admins, and anyone marked as a creator.
Current visibility: Friends-only
This item will only be visible in searches to you, your friends, and admins.
Detective Di: The Silk Rose Murders
Description Discussions0 Announcements5 Comments158 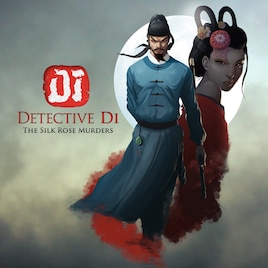 minhta
Offline
See all 15 collections (some may be hidden)
Kickstarter

View Detective Di: The Silk Rose Murders in the store

Just in time for Chinese new year, Detective Di: The Silk Rose Murders now has its very own Steam store page (available in English and Chinese as of this post).

This is a major milestone for us, but with this announcement, we're also sharing something we've been holding close to the vest for a little while, and that is the game's release window, which has now been set to late spring 2018.

We hope you'll all take this opportunity to add the game to your wishlists and spread the word about our little passion project.

Happy Year of the Dog!

Read More
Detective Di Chinese and French Localizations in the Works!
May 4, 2017 - minhta

We are very excited to announce that Detective Di: The Silk Rose Murders will be localized for French and Chinese audiences.

We are partnering with WhisperGames and Alban Leloup to produce the Chinese and French translations, respectively. As a small independent team, we feel very fortunate that these translators believe enough in the game's cultural value and artistic vision that they are willing to take part in the project. Thanks to their efforts, we will have an opportunity to release our game to a larger, global player base.

For more information on recent developments, you can read our latest Kickstarter update here. You can also follow us on Twitter (@Nupixo) for the most up-to-date info.

Read More
Description
Release date: spring 2018
Detective Di: The Silk Rose Murders is a point-and-click adventure game where you play as Di Renjie, ancient China's most famous and gifted investigator, as he tracks a serial killer in the heart of the Tang Dynasty's capital city.

THE STORY
Amid lingering political turmoil, the first and only female empress of China, Wu Zetian rises to power. Within months of her ascension to the throne, murmurs of discontentment and revolution swell as detractors and enemies begin plotting against her. It is against this backdrop that our protagonist, newly appointed investigating magistrate Di Renjie, must solve a gruesome series of murders--which will lead him on a collision course with the Imperial court and the empress herself.

Will our young detective overcome his own inner demons and his allegiance to the previous emperor? What is the connection between the murder victims and the capital's many political secrets? YOU must uncover the truth...

GAMEPLAY
Playing as the legendary detective, players will explore this unique setting and unravel its narrative twists and turns using familiar adventure gameplay mechanics such as exploration, dialogue choices, interaction with objects and clues, and puzzle-solving. Additionally, we are introducing an original mechanic where you will be able to deduct and reenact the scene of a crime and put your theories to the test.

The pixel art style of the game is also an homage to old school graphics, but we've added our own visual signature and design sensibilities. The game contains over 45 locations (many spanning multiple screen widths), each one pixel-painted with care and attention to detail.

Detective Di: The Silk Rose Murders has been Greenlit and is now listed in the Steam store. For the latest information, purchase options, and discussions for Detective Di: The Silk Rose Murders, please see it on the Steam Store or in the Steam Community.
Visit Store Page
For more details Visit Community Hub
For latest discussions
If you really, really want to, you can continue to the Greenlight page. Information on this page may be out of date, since all the action has moved to the areas noted above.