Greenlight > Games > Rosebud Games's Workshop
Greenlight is being retired. For more information on how to submit games to steam, refer to this blog post.
This item has been removed from the community because it violates Steam Community & Content Guidelines. It is only visible to you. If you believe your item has been removed by mistake, please contact Steam Support.
This item is incompatible with Greenlight. Please see the instructions page for reasons why this item might not work within Greenlight.
Current visibility: Hidden
This item will only be visible to you, admins, and anyone marked as a creator.
Current visibility: Friends-only
This item will only be visible in searches to you, your friends, and admins.
House of Caravan
Description Discussions1 Announcements3 Comments186 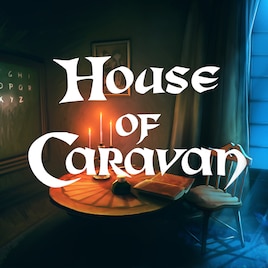 Rosebud Games
Offline
See all 22 collections (some may be hidden)

View House of Caravan in the store

We're very happy to announce that House of Caravan has been released for Mac on Steam.

We are aware that there have been many Mac users waiting for the game, so we are glad that finally the game is coming to Mac!

Oculus ready version is coming soon for both PC Windows and Mac!

For those who haven't been connected last days, just as a reminder, House of Caravan was released on Steam the 16th of April as announced!

We hope you enjoy exploring the house and don't hesitate to leave your own comments!!!

Thank you all!!!
The Rosebud Team

Read More
Description
Release date: Spring 2015
A spine-tingling horror adventure, House of Caravan takes place in a single mansion in Candlewood, northeast USA, in the early 20th Century. Stepping into the role of a young boy captured by strangers on his way to school, you’ll be tasked with exploring the house, uncovering clues as to your kidnapping, while attempting to find a way out.

But in this apparently deserted mansion, something doesn’t feel quite right...

With a gorgeously rendered 3D environment, full voice acting, and dozens of secrets to uncover, House of Caravan is a room escape game with a sinister twist. It’s Gone Home meets Crimson Room meets PT, with lashings of Edgar Allan Poe thrown in for good measure. The game will release for PC, Mac and Linux in Spring 2015 - and we'd love to bring it to Steam!

javierucu Feb 5, 2016 @ 12:43am
hi, i think House of Caravan looks fantastic. I love horror, hehe. Now i´m finishing the soundtrack in other game and it would be great to work beside such a promising team. I think my music could fit well in your project. You could listen here: https://www.youtube.com/watch?v=pA7fQzZ9gUU What do you think? my email is: cga.sound@gmail.com Thank you. Good Job.

House of Caravan has been Greenlit and is now listed in the Steam store. For the latest information, purchase options, and discussions for House of Caravan, please see it on the Steam Store or in the Steam Community.
Visit Store Page
For more details Visit Community Hub
For latest discussions
If you really, really want to, you can continue to the Greenlight page. Information on this page may be out of date, since all the action has moved to the areas noted above.