Greenlight > Games > The Sheep's Meow's Workshop
Greenlight is being retired. For more information on how to submit games to steam, refer to this blog post.
This item has been removed from the community because it violates Steam Community & Content Guidelines. It is only visible to you. If you believe your item has been removed by mistake, please contact Steam Support.
This item is incompatible with Greenlight. Please see the instructions page for reasons why this item might not work within Greenlight.
Current visibility: Hidden
This item will only be visible to you, admins, and anyone marked as a creator.
Current visibility: Friends-only
This item will only be visible in searches to you, your friends, and admins.
EXPOSURE
Description Discussions0 Announcements2 Comments21 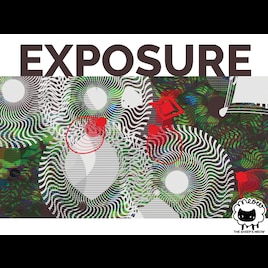 The Sheep's Meow
Offline
See the collection (may be hidden)

View EXPOSURE in the store

Kill Screen wrote about EXPOSURE. Check it out here!

Read More
Description
Release date: Q1 2018
EXPOSURE is a game of intense hiding. Survive in an evolving environment by morphing between light & dark forms to camouflage from your predators. But be careful: you won’t be able to see yourself either. Adapt to seeing without looking.

EXPOSURE is about losing the ability to see where you are, and learning to feel & know where you’re going.

"It looks like a Mondrian Möbius strip collapsing in on itself, taking Bridget Riley optical illusions and military dazzle camo kicking and screaming with it ... It’s a mix of chill bullet-hell intensity diced with fight-or-flight stealth. It’s intuitive, but weird."
- David Wolinsky, Kill Screen

Knight-Crawler Feb 22, 2015 @ 1:33am
I see what's going on you are a white do and you jump in to other white elements to hide from the red enemies.. would be nice if you could create your own worlds with a level editor.. by choosing from objects enemies and colors.

SuperStarAD Feb 18, 2015 @ 9:29pm
For some reason, I tend to buy these beautiful eye candy games that are fun to play, and after several hours of gameplay, I still don't know what's going on. I think this game is one of those. Please though, the replayability on its own will probably be low, so either make the price $4.99 or less, or add Steam achievements.

EXPOSURE has been Greenlit and is now listed in the Steam store. For the latest information, purchase options, and discussions for EXPOSURE, please see it on the Steam Store or in the Steam Community.
Visit Store Page
For more details Visit Community Hub
For latest discussions
If you really, really want to, you can continue to the Greenlight page. Information on this page may be out of date, since all the action has moved to the areas noted above.