Greenlight > Games > Seki's Workshop
Greenlight is being retired. For more information on how to submit games to steam, refer to this blog post.
This item has been removed from the community because it violates Steam Community & Content Guidelines. It is only visible to you. If you believe your item has been removed by mistake, please contact Steam Support.
This item is incompatible with Greenlight. Please see the instructions page for reasons why this item might not work within Greenlight.
Current visibility: Hidden
This item will only be visible to you, admins, and anyone marked as a creator.
Current visibility: Friends-only
This item will only be visible in searches to you, your friends, and admins.
Bitesize Wars
Description Discussions3 Announcements2 Comments214 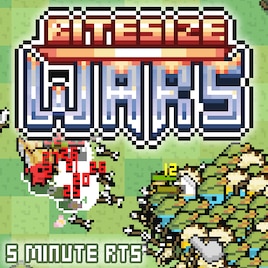 Seki
Online
See all 19 collections (some may be hidden)
Recent Announcements View All (2)
Progress and FAQ
February 23, 2015 - YellowAfterlife
Development progress
Since the launch of Greenlight campaign, we've been actively working on the map editor.
There are a couple of reasons to why this is a reasoned thing to do:
1. It allows for easier creation of campaign and skirmish maps (current method is far from optimal).
2. It brings the game few steps closer to having user-created content support.
Here's how the things look so far (chronologically):

You can paint terrain tiles on layers to produce variety of scenery.

There's also an option to have tile corners picked automatically on painting (makes the process a lot faster).

You can also place objects and decorations quite easily.

And, not a thing that you can see in games often, but it is also possible to edit maps collaboratively. We'll post more about this later, but, in short, it can make multiplayer map creation a lot more convenient and fun.

If all goes well, we should have both a campaign and a map editor ready for the first public version.

Frequently asked questions
Is there a way to buy/preorder the game?
The game will be shortly available on Desura and Steam' Early Access.

What will the single player mode look like?
At the moment we are working on single-player campaign (including a tutorial), as it is a more viable method to warrant at least some hours worth of game if you don't have anyone to play with. In the future we will be looking to expand the game with single-player and co-op skirmish maps against the AI opponents.

Hi guys! We want to thank everyone for the kind support! We think that we will be on Steam soon.
We will post new updates about what we are doing on the game very soon. If you want to keep supporting please share this game with your friends.Have a good day! :) BiteSizeWars is a small-scale RTS game with 5-minute matches and online multiplayer support.

In this game you gather resources, build units, upgrade them -- and then smash your way through the opponents forces. The goal of the game is to eliminate all enemy units and capture their base.

Plan your attack, exercise full control over the tide of battle with control groups and intuitive RTS controls, up your rank and send the enemies back to where they came from... And let’s be honest, that is probably the same place you came from.

Being a fast-paced game, online multiplayer functionality is specifically designed to be as smooth and fair as possible to all players.

At the moment we have a Windows build of the game with an online 2-player mode fully functional and ready for early access. In the future we plan to introduce the following features:

When is this game going to release?
Ivan The Terrible

Two questions about the game, that I'd love answers for.
hhhhhhh
< >
214 Comments

ItsBujaBoy Aug 14, 2016 @ 8:35am
From what I have seen, this game looks very interesting. Might check it out when it released.