Store Page
Garry's Mod>  Workshop > pillow's Workshop
This item has been removed from the community because it violates Steam Community & Content Guidelines. It is only visible to you. If you believe your item has been removed by mistake, please contact Steam Support.
This item is incompatible with Garry's Mod. Please see the instructions page for reasons why this item might not work within Garry's Mod.
Current visibility: Hidden
This item will only be visible to you, admins, and anyone marked as a creator.
Current visibility: Friends-only
This item will only be visible in searches to you, your friends, and admins. 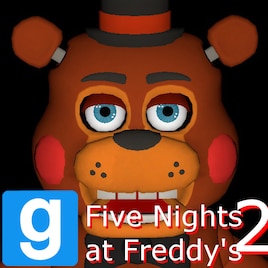 This item has been added to your Subscriptions. Some games will require you to relaunch them before the item will be downloaded.
In 1 collection by pillow
Five Nights at Freddy's Content

To View Updates, please click here.
Disclaimer
This addon is not to be edited and / or uploaded / reuploaded without my consent. The base is for my personal use only, modifying or uploading your own NPC using my addon as a base or source is not okay unless my consent has been given.

Information
After your impatience and harassment, hopefully, it will have been worth the wait.
So after the success in my first set of Five Nights at Freddy's NPCs, you guys wanted and demanded more.
Please be more patient next time.
These Entities and NPCs will do whatever it takes to murder you.
They play random scare sounds, death animations, static and robotic whispering. If you enjoyed the game, why not give these a shot.
Please restart your game after installing
Also view the images below, they describe why the NPCs won't run.
Special thanks to I6NIS for developing these models.

Console Commands
1 = True.
0 = False.
This addon includes an options menu on the right.
These commands won't work unless Garry's Mod is restarted after installation.

Todo
Feel free to leave a like if you enjoy this addon.

TheYankeeThatActuallyHasABrim Oct 9 @ 2:54pm
Once there was a girl named clarrissa, she was lesbian, sadly. and she smoked loads of that stuff. she loves parties! shes actually really nice, and likes justin bieber! Tbh shes pretty cool ngl

TheYankeeThatActuallyHasABrim Oct 9 @ 2:49pm
sorry, but do the ragdolls make sounds? sorry if it sounds stoopid

ElectricMadness Oct 6 @ 1:54pm
can you make we can kill them again? they are animatronics not demons. because they aren't demons they still can die, please make them killeable again

The Professional N0ob Aug 19 @ 6:47pm
the worst part about this mod is this: there is nothing you can do to stop these NPC's from doing what they want, I have a mod that lets me stop time, basically it DISABLES NPC's no matter what, (yeah if you watch the show then you know why I can stop timeゴ) so presumably I stop time as usual, these NPC's continue to chase, you can even disable their ability to detect the player and they resume to chase you, if you are used to feeling like a god with all the mods you have, this is the mod that reminds you that you are not invincible

Reemerging light Aug 7 @ 6:19pm
WARNING! Carry on reading, Or people will be fooled by these chain messages. Yes the one that said that you would die if you didn't read it or copy and paste it. Yes I remade my STOP CHAIN MESSAGES chain message as I forgot where I posted my original one. Anyway, DON'T BELIEVE THE STORY ABOUT CLARISSA. EVEN THOUGH IT SAYS IT'S NOT FAKE, IT IS FAKE. Do not fall for these. COPY AND PASTE THIS TO SAVE USERS FROM GETTING FOOLED BY THESE CHAIN MESSAGES!


if children are scared by this, that tells you how gulable they aer
< >