Greenlight > Games > Pixelnest's Workshop
Greenlight is being retired. For more information on how to submit games to steam, refer to this blog post.
This item has been removed from the community because it violates Steam Community & Content Guidelines. It is only visible to you. If you believe your item has been removed by mistake, please contact Steam Support.
This item is incompatible with Greenlight. Please see the instructions page for reasons why this item might not work within Greenlight.
Current visibility: Hidden
This item will only be visible to you, admins, and anyone marked as a creator.
Current visibility: Friends-only
This item will only be visible in searches to you, your friends, and admins.
Steredenn
Description Discussions3 Announcements3 Comments198

Pixelnest
Offline
See all 18 collections (some may be hidden)

View Steredenn in the store 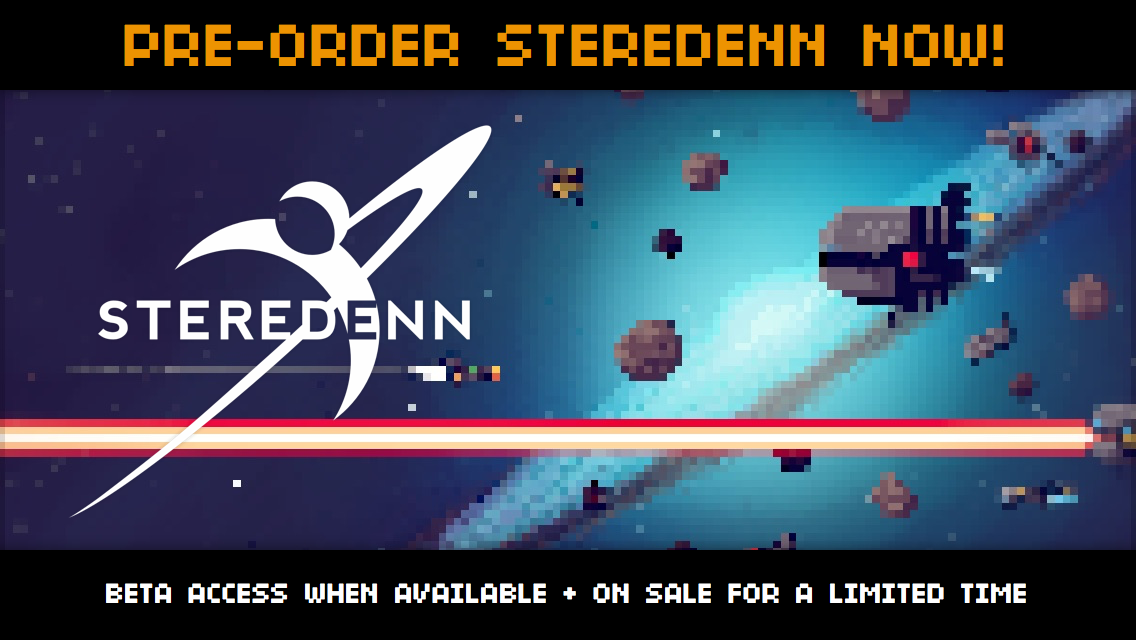 You can pre-order Steredenn for Steam now! (PC/Mac/Linux)[steredenn.pixelnest.io]

Beta access when available (soon) + on sale for a limited time.

Read More
Description
Steredenn is a frenetic and chaotic space shooter, carved in big beautiful pixels, with insane boss battles. Embark in your ship and engage the fight against dreadful space pirates in a never-ending combat for your survival.

Steredenn is at the crossroads between a shmup and a rogue-like. Enjoy the infinite replayability of the game with its unforgiving gameplay, intense boss fights, (almost-)randomly generated environments, twisted space events and a surprisingly large arsenal of weapons.

* Beautiful art and spaceships.
* Awesome boss fights.
* Addictive, ruthless.
* Endless arcade gameplay.
* Quick and intense sessions.
* INFINITE REPLAYABILITY: levels are (practically) randomly-generated.
* SCORING: beat your friends and be the best!
* CHALLENGES: Try to pass all the hard hand-made challenges.
* ARENA: Unlock a boss by defeating it in the normal mode. Then, train against it in a 1 to 1 duel. Your guns, your laws, your fight.

Steredenn has been Greenlit and is now listed in the Steam store. For the latest information, purchase options, and discussions for Steredenn, please see it on the Steam Store or in the Steam Community.
Visit Store Page
For more details Visit Community Hub
For latest discussions
If you really, really want to, you can continue to the Greenlight page. Information on this page may be out of date, since all the action has moved to the areas noted above.