Store Page
Don't Starve Together>  Workshop > K1NGT1GER609's Workshop
This item has been removed from the community because it violates Steam Community & Content Guidelines. It is only visible to you. If you believe your item has been removed by mistake, please contact Steam Support.
This item is incompatible with Don't Starve Together. Please see the instructions page for reasons why this item might not work within Don't Starve Together.
Current visibility: Hidden
This item will only be visible to you, admins, and anyone marked as a creator.
Current visibility: Friends-only
This item will only be visible in searches to you, your friends, and admins. 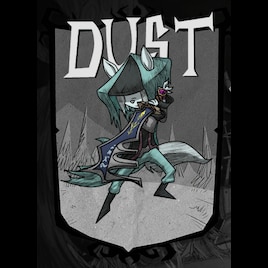 K1NGT1GER609
Offline
See all 566 collections (some may be hidden)

This item has been added to your Subscriptions. Some games will require you to relaunch them before the item will be downloaded.
Description
WARNING: This mod has a flashing cloak, if you have had a history of seizures DO NOT download this mod. You have been warned.

This character is based on the indie game: "Dust: An Elysian Tail". This mod was done in my spare time so give me the errors (via screenshot) and ill see what I can do.

Meet Dust the hero from falana after the events of his story (little spoilers), he wants to go back home to falana. As dust you must survive the don't starve universe until you work with a certain character on a way back home. Most of Dust's quotes will have some reference to his experiences at falana and discover that food isn't preserved. During the beginning of the game he's incredibly vulnerable and won't last long in fights, so avoid conflict until proper armor is available. Dust comes with custom sound from Abadis forest and Sorrowing Meadows sound track from the game itself.

Perks:
Fearless:
Dust has never feared any foe big or small, and the same applies here. No sanity loss being next to most enemies.
Dust is comfortable with the darkness, 75% sanity drain in the dark.

Assassin:
Dust's secret makes him an assassin class that rely's on hit and run. 33% extra damage on most weapons.
Most Assassins were never ment to tank damage and rely on speed and the element of surprise. Dust's speed is 25% faster than wilson and has low health.

Robes of the mithrarin:
Dust's robes keep him from freezing in the winter.
Unfortunately his robes are flammable, 50% extra damage from fire.

The Blade of Ahrah- The legendary Blade has joined Dust in his journey, Ahrah was created by the moonbloods to be unbreakable but without augments falls behind the dark sword's damage. Ahrah can only be held by dust only.

The Blade of Ahrah augmented- Upgrade ahrah with a augment to match the darksword's power. By adding a large amount of gold to ahrah dust's speed is decreased by 10%.

The robes of the mithrarin- create the sen-mithrarin's robes that go underneath his clothes just like it does in the game. The robes are a good jacket for winters but terrible choice of armor in summers. All robes can be repaired via sewing kit.

Dust's house- Cut content and you should know what it does.

Save Point- directs teleportation stones to it and resurrects you if you haunt it.

Cirelian light/flameless light- A portable lantern when dropped provides a great amount of light.
The ring of sight- provides an unlimited fuel source like a lantern.

The teleportation stone-similar to the teleport staff this gem has a few tweeks like not causing lightning to burn your world when used, not causing rain, not sanity draining and teleports to a save point.

The pendant of wisdom- A fragile defensive necklace that heals the wearer with 2 health per 120 seconds, this pendant can also be combined with your robes to double its durability and raise its protection making dust tankable.

The battlemaster's pendant- A useful necklace that increases dust's damage output to 2x the damage instead of 1.33x. It has unlimited durability and can be combined with your robes.

Magma mantle: Designed to withstand high temperatures and be highly fire resistant, this armour will reduce dust's flammablity to 50% and keeps the user cool in the summers. It also provides a moderate amount of rain protection.

Dust can wear the exoskeletons of the stalker mod with no speed penalty. Dust is universally neutral to all factions in the stalker mod and can recruit any AI to help him. Dust has some quotes about the stalkers and vise versa. Dust plays a role in the whaler mod, you'll have to get far into the game to know what.

My other work:
http://steamcommunity.com/sharedfiles/filedetails/?id=520571095

All right reserved to Dean Dodrill on this character, rights reserved to HyperDuck SoundWorks for dust's speech, credit to Deo Dragon wolf leo for the template,credit to sw1tchbl4de for the artwork and credit to Cheerio for the hat template.

Auren Wolfstein Jan 25 @ 4:39pm
@K1NGT1GER609 Thank you for the quick response. I was able to verify that it was not in fact your mod, as I had the same issue with both vanilla and other character mods. I do however, believe there's an issue with Dust's speed. He seems to move as fast as other vanilla characters, despite the mod stating he's 25% faster than Wilson, that's might just be latency on my end though. Thank you again!

K1NGT1GER609  [author] Jan 25 @ 4:06pm
@Auren Wolfstein
I'm not having any luck catching the error with the info you put. Got a screenshot of the error message or the log usually located at: Documents\Klei\DoNotStarveTogether\client_log.txt
Servers with caves can be found at: C:\Users\Ryan\Documents\Klei\DoNotStarveTogether\Cluster_1\Master\server_log.txt
Note cluster1 is save slot 1, so if you use save slot 4 then its Cluster_4.

Auren Wolfstein Jan 25 @ 12:52pm
Hello, unsure if you're even updating this anymore. But I may have encountered a potential bug. One can initially join the game just fine as Dust, however, when returning to a world or trying to reload, the game crashes.

K1NGT1GER609  [author] Nov 30, 2018 @ 8:49pm
@Padu
Its under the mithrarin tab but youll need the ancient atlar station for them to show. Its also shown in the pictures showcase.

Auren Wolfstein May 9, 2018 @ 7:04pm
I'll definitely let you know of any errors that I encounter if I find any. Honestly this mod is pretty well put together I'm surprised it's just you. And yeah I also read about you being busy with school and such, so I apologize if I came off as inconsiderate.

K1NGT1GER609  [author] May 9, 2018 @ 9:23am
@Auren Wolfstein
It wasn't abandoned its just that I've been occupied with fixing and working on my other large mod. Dust could use an update in speech and some bug fixes but I'm mainly a one man team fixing these content heavy mods (I'm also arguing with myself on making another mod filled with similar amount of items and mechanics) minus the artwork I can't do art only coding. So within a week I can update it and try your suggestion, otherwise if its working then I won't know when it breaks down so thats why I kind of rely on on the others who download my mod to give me the errors (and feedback as well).

Saturday Morning Lilligant Nov 29, 2017 @ 8:55pm
Fix the character art. I love Dust an elysen tale but looking at the art for your mod makes my eyes bleed. Serously fix it. The art sucks.