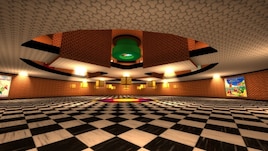 I'm the new guy, go easy :D
Online
See all 854 collections (some may be hidden)

This item has been added to your Subscriptions. Some games will require you to relaunch them before the item will be downloaded.
Description
Big update - 2021
I have updated the map with 3 new mini-games, as well as some quality of life features and optimisations.
These 3 new mini games brings the total games to 25 (not including the death match in the lobby).
The player who catches the mushroom has the option to disable music for the entire round, by pressing the portrait of mario.

The Lobby
The enterance features coin boxes that the players hit, in order to spawn the mushroom. The mushroom runs away from the players, but will teleport a player above if caught.
The top section of the lobby has all of the games featured as portraits, and the player can select their desired game by pressing +use on it.
There is also a chance that the coinbox will spawn obstacles around the bottom part of the lobby, initiating a short death match game.

Platform Peril
Players must race each other to the end of the course by jumping on the platforms in front of them.
The platforms will drop from the air a short while after being landed on, so don't fall behind!

King of the Hill
Respawns are enabled and players must fight for control over the centre of the map for the specified time.

Pirate Climb
Players must climb to the top of a cylindrical pole while avoiding the boulders that are dropping from the top, and the lasers firing from the walls. The winner is the first player to the top.

Fight Yard
A number of weapons are on the ground in front of the players. They must select a weapon and eliminate the other team.

Gravity Revolvers
Platforms float in the air and low gravity is enabled. Players fight each other using the revolver.

Sky Platforms
4 cannons are lined up at 4 platforms. Players must choose a platform and hope they dont get shot. Completely RNG.

Floating Islands
Islands float at differnt heights and are randomly accessible via a pipe in the centre of each. Players must use snipers to eliminate each other.

Hunter Games
Players start in a pipe at the centre of the map. After the round starts, they must find question boxes to get a gun and eliminate each other. Free for all.

ScoutzKnivez
A small map with snipers and knives.

Mario Says
Players must move onto an individual platform and wait for mario to hold a flag up. They must press the corresponding button to what Mario holds up (or no button if there is no letter on the flag) before the timer runs out. The timer is shorter as the round goes on.

Chain Chomp
A chain chomp will randomly target a player and move towards them, changing targets when they die. Use this to lure it into other players!

Knife Arena
Players spawn on the opposite end of a platform. A cannon circles the platform and will randomly fire, killing any it hits. Players must knife each other while avoiding the cannon shots.

Skipping
A simple skipping game that gets faster and has a raising and lowering rope.

Sniper Thwomps
Players spawn at opposite sides and are separated by thwomps that randomly raise and lower. They must snipe each other to win.

Hexagon Heat
Players stand on 7 joined platforms (all different colours), and must run to the correct colour as it is displayed, or fall into the lava.

Speed SMGs
2x speed and given an SMG. Players must eliminate the other team to win.

Thwomp Falls
9 Thwomps sit above a pool of lava. Players must knife each other while avoiding the thwomps that drop into the lava.

Block fort combat arena
Players spawn in a random location in a FFA battle. They must run into a diamond in order to get assigned a random weapon and eliminate all other players to win.

Pirate Island
Players spawn on an island in the middle of water. They must dodge the cannon shots from the nearby ship, while the island gets smaller and smaller.

*New* Marines VS Predators
A number of players are randomly assigned as predators and are given increased health, speed, regen, invisibility and a knife, while the remainder are able to pick up guns. Each team must eliminate the other to win. Beware the roaming chomp!

*New* Chomp Knife
5 lanes connected to tunnels run across the map, separated by lava. A hungry chomp roams the lanes looking for food. Players must knife each other while avoiding the hungry chomp.

QoL update!
I have added a portrait that will allow players to mute the music for the rest of the game. It is up to the player who picks the minigame if they want to disable music or not.

Map is also under 150MB now, so shouldn't have issues with download servers.
Popular Discussions View All (1)

How do I turn off the music permanently?
Antarata
< >
269 Comments

N7NobodyCats Mar 14 @ 7:20pm
should update this map again but remove the loud music its annoying and no one likes it. or even move the button on the main spawn floor instead, as well as removing the auto select the choices are so many but theyre very spread apart so its hard to find the one you want in the given amount of time, so you either remove the auto select or make put the different options in a more compact way to see everything easier