Greenlight > Games > Dream Reactor's Workshop
Greenlight is being retired. For more information on how to submit games to steam, refer to this blog post.
This item has been removed from the community because it violates Steam Community & Content Guidelines. It is only visible to you. If you believe your item has been removed by mistake, please contact Steam Support.
This item is incompatible with Greenlight. Please see the instructions page for reasons why this item might not work within Greenlight.
Current visibility: Hidden
This item will only be visible to you, admins, and anyone marked as a creator.
Current visibility: Friends-only
This item will only be visible in searches to you, your friends, and admins.
Spellweaver TCG
Description Discussions13 Announcements17 Comments167 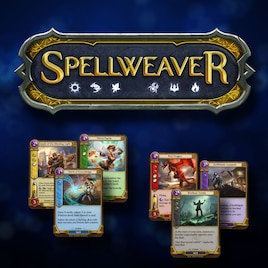 Dream Reactor
Offline
See all 35 collections (some may be hidden)

View Spellweaver TCG in the store

The day has come. Spellweaver has been officially released!
Our 5-man team worked for endless hours more than 4 years to bring Spellweaver where it is now. But it was worth every minute!

After 5 months in Closed Beta, and then another 7 months in Open Beta. After more than 100 patch updates and thousands of fixed bugs. After more than 1 000 000 games played we are finally ready. Spellweaver is now complete enough to be brought into the gaming world, and to take the digital card game genre by storm!

Of course, there is no better way to do so, than a Steam launch!

By bringing Spellweaver to Steam we hope to be able to reach millions of cards game lovers and challenge them on the battlefields of Asperia.

Today we also mark the official start of the first Spellweaver Season – Valiant Dawn. The initial card set offers you 222 effective and potent cards, with 18 different unique Heroes among them. Valiant Dawn will be expanded by more cards, and single-player campaigns during the course of this year.

The team’s bold ambition has always been to have Spellweaver be an ever growing and long-lived card game. Our main focus remains on developing the features most desired by our players, working on new card expansions, and bringing you exciting events you can enjoy, while, of course, keeping the high quality level the game deserves.

Thank you everyone! May the cards be with you!
Read More
Spellweaver Steam Date Announced
January 10, 2016 - Dream Reactor

The moment of truth is finally on the horizon!

The release date is set for 1st of February 2016!
We are finally dropping the “Open Beta” label and moving forward. We do believe that Spellweaver now has the features and quality to be on par with the leading card game titles on the market.

This is the biggest and most important milestone for the project. Spellweaver is also going to Steam – the largest gaming platform in the world. This will allow us to reach millions of gamers, and grow our player base significantly.

Our goal has always been to build Spellweaver into a thriving brand that will engage and entertain card game lovers for years to come. For us, Steam is not the the end, it is a new beginning. We will continue to develop the game, to implement new features and to create new cards as long as there are passionate players who play it!

This is an event worthy of celebration. So, to answer the calls of our great community and to complement the release

we are going to introduce SIX NEW CARDS!
That’s one new card for each aspect, and be sure we’ll make them count! Bear with us in the final weeks countdown for more information.

Let’s knock on wood, and wish for a stellar year!

About:
Spellweaver is an online digital trading card game (TCG), created by a self-funded indie team of seasoned game developers with a passion for card games. The game focuses on strategic depth and variety, while still being easy to learn. It is a game true to the classics of the genre, with their longevity and strategic depth, in a detailed and vivid art style, with countless deck-building options and an original fantasy world to explore.

Specific features:
Main features:
Why Steam?
This is almost a rhetorical question - every developer wants his game on the largest gaming platform in the world. With that same power, every gamer wants his favorite game there as well. But what do gamers really get? What are the benefits for you? Why should you vote for Spellweaver TCG in Greenlight? Well, it’s pretty simple... if our game gets on Steam we will be able to reach this tremendous gaming community and the people playing the game will multiply significantly. That means more players for you to compete with, more followers to develop the game`s community, a more polished experience with less bugs and glitches... and, of course, more funds available for us to reinvest and further develop the game, adding new features and expanding it with new seasons.

If you like playing Spellweaver TCG, if you are willing to try Spellwaver TCG in the future, or you just want to show your support to the hardworking indie developers behind the project, please don`t hesitate to cast your vote for the game. We would be immeasurably grateful!

Thank you for your interest!
Popular Discussions View All (13)

Have fun with the Game.
Warpheus

Thanks for your support! We will take your advice into consideration : )

Spider3 Nov 22, 2015 @ 8:32am
Yes, I checked the Crafting..the ratio is still pretty high, but I'm also not pretending you devs have to give all your efforts for free :) ..i'm ok with investing some money in buying packs. But it's always a shame that you need to destroy legendaries or cards you don't need that are pretty valuable with such high conversion ratio. The trading part is adding a more "social" side to the game and attracting more players. Anyway it's very hard to find a perfect card games - and as long as you keep the game interesting and not screwing up in p2w cash milking (like what happened with MM:DOC and IW), i'm supporting you indeed, since the mechanics are really cool and the game offers both PvE and PvP. Looking forward for new features on release! ^^

Hello and thank you for your comment! There is no "trading" between players in Spellweaver, but we do have a quite interesting crafting system that can be much more useful and rewarding than actual card market. Hope you'll give Spellweaver one more chance! Cheers!

Spider3 Nov 14, 2015 @ 3:51am
I really like the mechanics. Not so dumb like HS, not too complex like HEX, very polished, nice gfx arts. Only REALLY bad thing is a CCG despite the title. And this is a big turn off. It's true that with an initial investment, unlocking all zones, you can "grind " enough to buy new packs/craft, but still..it's a shame such a good game not being a TCG.

Spellweaver TCG has been Greenlit and is now listed in the Steam store. For the latest information, purchase options, and discussions for Spellweaver TCG, please see it on the Steam Store or in the Steam Community.
Visit Store Page
For more details Visit Community Hub
For latest discussions
If you really, really want to, you can continue to the Greenlight page. Information on this page may be out of date, since all the action has moved to the areas noted above.