Store Page
Don't Starve Together>  Workshop > CowboyPunk's Workshop
This item has been removed from the community because it violates Steam Community & Content Guidelines. It is only visible to you. If you believe your item has been removed by mistake, please contact Steam Support.
This item is incompatible with Don't Starve Together. Please see the instructions page for reasons why this item might not work within Don't Starve Together.
Current visibility: Hidden
This item will only be visible to you, admins, and anyone marked as a creator.
Current visibility: Friends-only
This item will only be visible in searches to you, your friends, and admins. 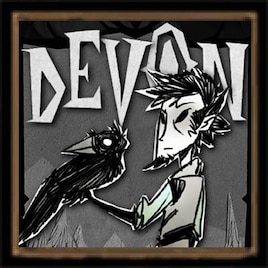 CowboyPunk
Online
See all 3883 collections (some may be hidden)

This item has been added to your Subscriptions. Some games will require you to relaunch them before the item will be downloaded.
Description
Finally here and now with custom sounds!
Original/RoG version can be found here.

ABOUT-
Devon is really just a character from a personal project that I like to make for most games. He's a fast and nimble, but he can't take a hit worth a damn. He's also fairly insane as it is, suffering from hallucinations of a near-death experience, so he fit pretty well into Don't Starve.

Other things:
- Full custom art and dialogue!
- Devon is now voiced by a rough banjo!

Devon is a greedy bastard and very specially trained as a thief and hunter - it's pretty much all he can do. He's extremely quick and lightfooted, but he's very weak and, honestly, stupid. During a robbery, he was near-fatally injured by a trap, which triggered a near-death experience involving an enormous endless, centipedal boar that crushed him in it's worm-like prehensile hairs. Since then, he has been plagued by hallucinations and paranoia of the memory. Funfact: Devon is HIGHLY misanthropic, which makes him basically stuck in a puddle of self loathing. Wholly convinced that his birth species is worthless, he tries to hide it with concealing clothing, a specially implanted beard, and, during a drunken dispair, by gouging out some distinctive markings. Despite his attempts, he can't eascape both the psychological and physiological aspects of his species.

BIRDY-
Devon's specially trained pet that helps him steal sh*t and keeps him company. She is his best friend and he keeps her from any danger for fear of losing her. He never goes anywhere without his Birdy.

She can be worn as a hat for a significant sanity boost. She also offers an even higher sanity boost when placed on the ground and stood near, but the radius is very small, so you need to cuddle up close. This most recent version has added a tiny warmth bonus from her fluffy bird butt when worn.

Other art and comics and poop I have related to Devon:
Devon's Pillow Book[devonspillowbook.tumblr.com] (A.K.A.: being exceptionally nerdy with Morrowind)
My Art blog[cowboypunkcolt.tumblr.com]

If you dig my mods (or comics or art in general) and would like to see more of them or see them improved, consider donating to my Patreon[www.patreon.com] to help me create more for you to play with!

BUGS, ISSUES AND TROUBLESHOOTING YOUR MOD:
If you're having problems with your mod, refer to this discussion to make sure the basics are working, if that doesn't help, feel free to leave a comment or send me a message so I can fix it.


Since it apparently needs some clarification: no, you may not upload this mod elsewhere without my permission. If you find a copy of Devon uploaded by someone else, this is copyright infringement and I would appreciate if you would inform me!
Popular Discussions View All (2)

Special Debuffs
he doesn't wear a hat Because he need bird for sanity
Bad cold resistant
A bastard because of his story!!!

Data Sep 11 @ 3:08am
bro i read....Inktober Day 2: Divided .I very like Devon, but it made me sick to see something like this from a character

Data Aug 1 @ 7:44am
you can add pocket knife? can he fend off the first blow he gets and damage it back? (dont forget cooldown)

Data Jul 29 @ 9:39am
Me and my friends waiting...One only friend want to kill me.Devon need update

4li Jul 7 @ 4:39am
a friend of mine loves to play devon please get an update for him