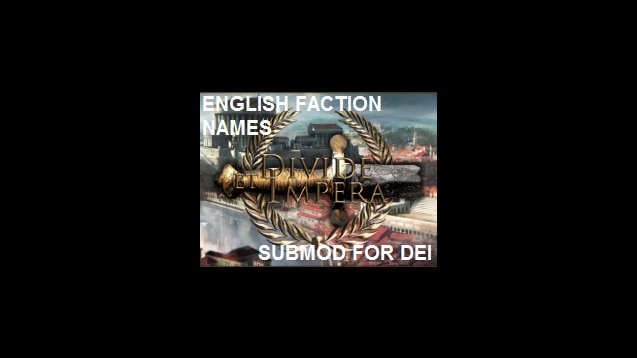 This item has been added to your Subscriptions. Some games will require you to relaunch them before the item will be downloaded.
In 2 collections by Augustusng
Augustusng's Rome II Faction Name Mods

3 items
Description
This the first part of the official English names submod for Divide et Impera 1.2. This submod is only faction names; unit names are unaffected. Unit names can be found in a separate submod (see collections)

Most faction names have simply been reverted to their vanilla versions, but there are four important exceptions. The Black Sea Colonies faction group has been renamed to Hellenic Colonies, the Nasamones to Cyrenaica, the Massagetae to Saka, and Arachosia to Taxila.

It should be obvious why the Black Sea Colonies have been renamed, but for the Massagetae, Saka makes more sense as the character of this faction has been changed enough by the 1.0 overhaul to justify it. The Nasamones have also been changed to Cyrenaica, since DeI currently uses that faction ID for them. In DeI version 1.05, Arachosia was changed to the Indian faction Taxila, and that is now reflected in this submod as well.

I've also uploaded this to the DeI submod forum on TWC: http://www.twcenter.net/forums/showthread.php?746452-Official-Submods-English-Faction-and-Unit-Names-for-DeI-1-2
< >
39 Comments

bentongrey Aug 16, 2019 @ 1:01pm
Howdy, let me add my voice to those hoping someone else will take to updating this submod. DeI is amazing, but I would really love the extra ease of having more easily understandable faction and unit names!

Rant of Yore Jul 26, 2019 @ 4:25pm
This is showing as outdated in the launcher and it doesn't work. Same for City names. Unit names shows as up to date but doesn't work nonetheless. Has anyone taken over maintaining this? DEI is unplayable without this submod
< >