Store Page
Don't Starve Together>  Workshop > Mr. Gentleman's Workshop
This item has been removed from the community because it violates Steam Community & Content Guidelines. It is only visible to you. If you believe your item has been removed by mistake, please contact Steam Support.
This item is incompatible with Don't Starve Together. Please see the instructions page for reasons why this item might not work within Don't Starve Together.
Current visibility: Hidden
This item will only be visible to you, admins, and anyone marked as a creator.
Current visibility: Friends-only
This item will only be visible in searches to you, your friends, and admins. 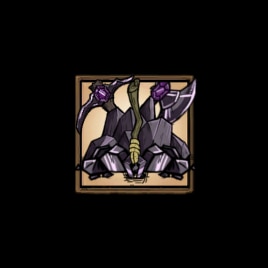 zarklord_klei
Online
See all 3921 collections (some may be hidden)

This item has been added to your Subscriptions. Some games will require you to relaunch them before the item will be downloaded.
Description
Everyone thank Zarklord for the amazing fix, that's been long overdue (I myself haven't touched the mod for almost 3 years now)

Since a lot of people don't know Tungsten: Tungsten, also known as Wolfram is the hardest elemental metal. Chemical Symbol is W. -> Wikilink[en.wikipedia.org]

-Fire Fleur - A flaming halberd that lights enemys on fire and gives off a tiny bit of heat when in your inventory or a lot when equiped. You'll burn yourself if you hold it too long, only advised during the winter
Texture by Marqson

-Tungsten Wall - Guess what, it's a wall made out of tungsten. Due to Klei completely changing up how walls work, I had to redo a lot about walls.
Texture by Marqson

-Tungsten Hardhat - Emits light when equipped, blocks up to 50% DMG (when it's fully fuled), can be equipped for ~2 days until it breaks. Can be recharged with Nightmare Fuel.
Texture by Marqson

-Thermal Tetrahedron - Magical Thermal Stone, does not decay over time. Quite expensive, mid to lategame item.

-Batarang - Only available with the Caves Mod or anything that allows Batilisks to spawn. Single use distance weapon.

-Tesla Trap - Quite expensive, but doesn't break and resets itself. Great for boss arenas

Warning: The old Potions and Potatoes are now in their own mod. You can find it here

Annotation:
If you want to test the new version with me, just add me on steam and we will play together!

Shoutout to Marqson, he redesigned most of my textures. And all that completely free.

If you have suggestions for "Examine" Quotes, put them in the comments below, I still need plenty of those.

Thanks for 60.000 Subscriptions
Mr. Gentleman
Popular Discussions View All (5)

Whyro Dec 21, 2020 @ 12:16am
this mod makes the fire on the campfire invisible. Would be awsome if it gets fixed i really like this mod

EldVarg Sep 12, 2020 @ 4:48am
Tungsten Mod together with [API] Gem Core makes Fire Pit have no flames.
Hope that can be fixed. Will report in other mod too.

레이 Sep 7, 2020 @ 10:12am
got an error after the tungsten fireplace has been created. entire file got lost. uhgs otherwise good.