Greenlight > Games > Pentadoos Games's Workshop
Greenlight is being retired. For more information on how to submit games to steam, refer to this blog post.
This item has been removed from the community because it violates Steam Community & Content Guidelines. It is only visible to you. If you believe your item has been removed by mistake, please contact Steam Support.
This item is incompatible with Greenlight. Please see the instructions page for reasons why this item might not work within Greenlight.
Current visibility: Hidden
This item will only be visible to you, admins, and anyone marked as a creator.
Current visibility: Friends-only
This item will only be visible in searches to you, your friends, and admins.
Massacre
Description Discussions0 Announcements3 Comments49 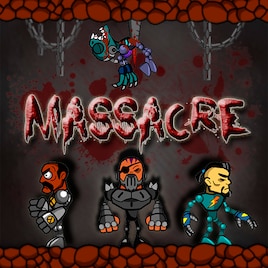 The game's official website[massacre-videogame.com] is now launched! You can find more information and artworks there. Don't miss the Characters[massacre-videogame.com] page in which there is all you need to know about Massacre in-game characters. This page will be updated when ever a new character is ready to release. If you want to know about us or simply have any ideas or questions, you could contact us there too. Have fun!

Take a look at the our page on indieDB.com. Help us raise the popularity of Massacre there! Rating and leaving comments is highly appreciated. We will also upload demos there for those of you who are a big fan of indieDB.

**Massacre is developed with flash and it contains 60fps footages. For best practice watch trailer in HD mode**

STORY
It's year 6612. There is almost no limit for science. The human race finally figured out that killing each other is of no good so there is no war anymore. No murder and there is just peace everywhere. But that's somehow boring for most! They say we all love violence and power deep inside our hearts, and that's why everyone is talking about "Massacre", an insane TV show where crazy and brave fighters from all around the world face deadly robots and creatures for fame and money. Are you ready for the show?

FEATURES:
Characters:
The game features 12 playable characters with unique super powers and abilities, each of them has 6 individual abilities ( controlled by [A,S,D,Q,W,E] on the keyboard) that makes you feel a completely different gameplay with each one.

Upgrades:
Characters, their abilities and powers can be upgraded in many aspects so you can build a powerful hero in almost any manner you want as the game proceed. Learn new abilities, upgrade the ones you already have, improve character's attributes and buy powerful items like heavy armors and deadly weapons and power ups.

Mini Games:
The game has a story mode that consists of 30 breathtaking rounds, an endless mode for high score addicts, and some fun mini games.

Almost Ready To Release:
We are on final stages of development, just a few steps to final product.
< >
49 Comments

Pentadoos Games  [author] Jan 16, 2015 @ 8:08am
Thanks a lot for all the supports! We are now working on a playable demo and we are sure you will enjoy playing Massacre as much as you liked the game's trailer. Please recommend Massacre to your friends and your friends of friends! Thanks