Greenlight > Games > Binary Cocoa's Workshop
Greenlight is being retired. For more information on how to submit games to steam, refer to this blog post.
This item has been removed from the community because it violates Steam Community & Content Guidelines. It is only visible to you. If you believe your item has been removed by mistake, please contact Steam Support.
This item is incompatible with Greenlight. Please see the instructions page for reasons why this item might not work within Greenlight.
Current visibility: Hidden
This item will only be visible to you, admins, and anyone marked as a creator.
Current visibility: Friends-only
This item will only be visible in searches to you, your friends, and admins.
Collider
Description Discussions1 Announcements2 Comments65 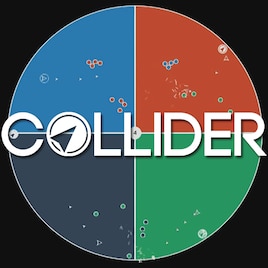 Binary Cocoa
Offline
See all 4 collections (some may be hidden)

View Collider in the store

Binary Cocoa will be participating at Openwest 2015. Openwest is a conference focused around open source software. We'll be showcasing a few of our games, one of them being Collider. We'd love to have everyone drop by and play it a bit. Conference information can be found at http://openwest.org . We hope to see you all there!

Despite the silence, Binary Cocoa has been exceptionally busy. So far as Collider is concerned, there hasn't been much direct progress, that isn't to say things haven't improved for it. When we first wrote the game and were prototyping it, our focus was on XBox controllers.

We've now expanded our support out to just about any twin stick controller. Additionally, this support is cross platform. Essentially, if your controller is dual stick, and your controller is supported in your platform, it should work in Collider. We've tested with a pretty good variety thus far and haven't found one yet that's stopped us. We will be releasing a tool for anyone who runs into a problematic controller that will gather the information needed for us to fix it.

Other things of note that we've done with Collider is improve the performance. While the game looks simple, we do get an incredible number of entities on the screen all doing their own processing. We've been able to optimize it considerably, so now we can have even more entities before the framerate dips below 60fps.

We thank everyone in the community for their continued support and kind words. We look forward to continuing development and making Collider awesome.

Game Modes:
Arc Wars - Players fire their weapons at the adjacent players' slices, where their bullets turn to player-seeking AI. Collect powerups and outlive your opponents to win.
Acrobat - Players dodge waves of enemy AI that release from the center of the arena, and crash against the exterior walls. Every few waves a seeker will spawn, tracking the nearest enemy. The longer you survive, the faster and more numerous the seekers become.
Core Defense - Players work cooperatively to protect the core at the center of the arena. As enemies are destroyed and the core remains safe, players will power up their abilities. If the core takes damage the players lose their abilities. Every few waves a boss will spawn that attempts to reach the center of the arena. If it succeeds, you fail!
And others, including mod support (community created game modes)!

Allows up to 8 players, most game modes offer a single player option.

Binary Cocoa  [author] May 12, 2015 @ 7:13am
Now that the conference is done, we're implementing all of the feedback. Soon we're going to have to make a new video showing off the new features. Thanks again for all of the support!

Collider has been Greenlit and is now listed in the Steam store. For the latest information, purchase options, and discussions for Collider, please see it on the Steam Store or in the Steam Community.
Visit Store Page
For more details Visit Community Hub
For latest discussions
If you really, really want to, you can continue to the Greenlight page. Information on this page may be out of date, since all the action has moved to the areas noted above.