Greenlight > Games > Groupees's Workshop
Greenlight is being retired. For more information on how to submit games to steam, refer to this blog post.
This item has been removed from the community because it violates Steam Community & Content Guidelines. It is only visible to you. If you believe your item has been removed by mistake, please contact Steam Support.
This item is incompatible with Greenlight. Please see the instructions page for reasons why this item might not work within Greenlight.
Current visibility: Hidden
This item will only be visible to you, admins, and anyone marked as a creator.
Current visibility: Friends-only
This item will only be visible in searches to you, your friends, and admins.
Cyber Chicken
Description Discussions7 Announcements6 Comments955 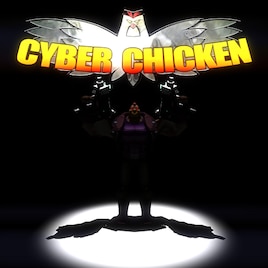 Groupees
Offline
See all 16 collections (some may be hidden)

View Cyber Chicken in the store

Hi everyone, if you have left a comment on the closed beta announcement for Cyber Chicken, you can now claim a beta key for it. To save trying to chase everyone down, the keys are being distributed on Groupees chat. Here's how it works:

Note: if you have changed your vanity URL since you last linked your account, please relink the account so the bot can find your profile.

To make it absolutely clear, you must have had posted a comment on the beta announcement prior to when this announcement was posted to be eligible for a key. If you didn't post, you won't get a key.

Once you've activated the key, please enjoy the game, and write your feedback in the beta forum.
Read More
CLOSED BETA SIGN UP
April 18, 2016 - Groupees

If you're interesting in helping, sign up here: http://steamcommunity.com/groups/groupees1#announcements/detail/968647542439380977

Cyber Chicken is a 2.5D side-scrolling, rollicking adventure featuring 8', 375 pounds of cybernetic poultry as a futuristic killing machine on a quixotic mission to save the World from itself. A satirical romp across pop culture and modern life, the comic-book styled game features weapon-based gameplay, platforming elements and lock/key puzzles in a metrovania-designed World.

The story follows Cyber Chicken as he sets out to suppress a cyberpunk revolt in the dystopian New York City of the future. Cyber Chicken soon realizes he's been played the fool and must confront intergalactic forces spanning dimensions of time. From his mayhem-laced adventures into modern day New York City, Cyber Chicken reveals a grand conspiracy involving the likes of Big Bucks Coffee, The Fakebook and the intergalactic leader himself, GW!

Though humor is at the core, the experience is layered with rich and varied influences from literary, film, comic and video game classics, including Don Quixote, Brave New World, Terminator, Blade Runner, Batman, Duke Nukem and Super Metroid.

With an arsenal of weaponry at his disposal that would make the Pentagon jealous including Thermal Nuclear Dual Uzis, Magnum 357,000, Nepalm Flame Thrower and a Sawed-Off Howitzer and the physical prowess that comes with an advanced cybernetic poultry makeup including spectacular parkour feats and a wicked right cross, Cyber Chicken is one badass hero you're not soon to forget.

Try out this free prototype build of the game! We're planning episodic releases featuring the clawed hero, Cyber Chicken, aka Jonny Cappuccino, in a comic book-like series. Your feedback is greatly appreciated during this initial build-out phase of development. Please note, current prototype build represents only basic gameplay. Not all gameplay mechanics have been implemented at this time. Please send any feedback you have to cc@groupees.com.

Groupees  [author] Feb 5, 2016 @ 3:36am
@IceFrost No the game is still being worked on. Jonny is getting some voice over work. Getting close now to the Steam release. We will give a proper update soon when it is incoming.

Groupees  [author] Jul 15, 2015 @ 3:07pm
Hi, game is still progressing behind the scenes as it were. We expect to begin some closed testing on Steam in about a month.

Cyber Chicken has been Greenlit and is now listed in the Steam store. For the latest information, purchase options, and discussions for Cyber Chicken, please see it on the Steam Store or in the Steam Community.
Visit Store Page
For more details Visit Community Hub
For latest discussions
If you really, really want to, you can continue to the Greenlight page. Information on this page may be out of date, since all the action has moved to the areas noted above.