Store Page
Don't Starve Together >  Workshop > rezecib's Workshop
This item has been removed from the community because it violates Steam Community & Content Guidelines. It is only visible to you. If you believe your item has been removed by mistake, please contact Steam Support.
This item is incompatible with Don't Starve Together. Please see the instructions page for reasons why this item might not work within Don't Starve Together.
Current visibility: Hidden
This item will only be visible to you, admins, and anyone marked as a creator.
Current visibility: Friends-only
This item will only be visible in searches to you, your friends, and admins. 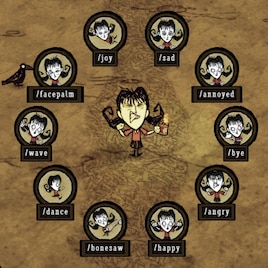 rezecib
Offline
See all 38564 collections (some may be hidden)

This item has been added to your Subscriptions. Some games will require you to relaunch them before the item will be downloaded.
Description
Adds a wheel selection interface for emotes, making it easier to emote.

By default, the hotkey is set to G (but you can configure it in the mod config options). Holding G will bring up the gesture wheel, then moving your mouse in a particular direction will select a gesture. When you release G, your character will do the gesture.

On controllers, pressing in the left analog activates the wheel, and selection is done by moving the left analog while it's still pressed in (then releasing to make the selection). It's technically bound to Menu Misc 3, which I believe you can rebind in the Controls menu.

I included several options that you might want to change:
Option
Description
Toggle button
Defaults to G, but you can set it to any letter key. Hopefully when mods get proper controls options, this will be nicer to work with :)
Wheel Size
Sets the size of the wheel. Defaults to 1, and can be set from 0.1 to 2.
Show picture or text
You can have it show just the picture, just the text, or both.
Center wheel
Determines whether the wheel comes up around your mouse or the center of the screen.
Restore cursor position
If Center Wheel is disabled, this setting doesn't do anything, unless set to Absolute. Otherwise:
Controller Stick
Left (the default) uses the left analog stick to select emotes, and Right uses the right stick. If you want to rebind which stick needs to be clicked in, rebind menu_misc_3 in the game's controller controls menu (you'll most likely want to swap it with the scoreboard button).
Limit to 8
Off (the default) uses all the emotes, but the wheel is getting pretty crowded (current at 12 emotes), so On limits the wheel to 8 emotes, which are chosen with the remaining options (Right Emote, Down-Left Emote, and so on).
Things I'd like to add to it:
* Maybe a nice wheel background to make it less floating-in-space-y
* Suggestions?

Thanks to PrzemoLSZ for fixing controller support!
Popular Discussions View All (5)

Will this be transported to dont starve?
Mr.TopHat With a ClassyCane
< >
794 Comments

mhrbnbngs Apr 7 @ 9:21am
I can't seem to update nor use the mod ever since the last update. Anyone else have that problem

rezecib  [author] Mar 26 @ 4:55pm
Devs hotfixed it before I got to it, but in case anyone's still running the pre-hotfix version, that's now fixed. Also results in a minor change where you can now gesture with the crafting menu open, as long as you aren't typing into the crafting search bar.