Greenlight > Games > descendantsgame's Workshop
Greenlight is being retired. For more information on how to submit games to steam, refer to this blog post.
This item has been removed from the community because it violates Steam Community & Content Guidelines. It is only visible to you. If you believe your item has been removed by mistake, please contact Steam Support.
This item is incompatible with Greenlight. Please see the instructions page for reasons why this item might not work within Greenlight.
Current visibility: Hidden
This item will only be visible to you, admins, and anyone marked as a creator.
Current visibility: Friends-only
This item will only be visible in searches to you, your friends, and admins.
Descendants
Description Discussions7 Announcements1 Comments100 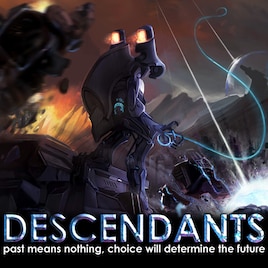 descendantsgame
Offline
See all 7 collections (some may be hidden)
Recent Announcements View All (1)
Greenlight today welcome to our website
April 25, 2015 - descendantsgame

Thanks to everyone who voted for our game. Come to our site http://descendantsgame.com/ we have a lot of new information for you. Summer will be ready alpha version of the game and we really need feedback - Join the forum and twitter https://twitter.com/DescendantsGame Thanks again to all who are not indifferent to our impulse to do role playing exciting again

Read More
Description
DESCENDANTS - open universe multiplayer RPG game. You can play for one of 20 fractions, move freely in space and at the same time explore large planets. A player can have a large amount of property, including buildings on planets and large spaceships with fully customizable interior space. Players can unite for various joint activities and to organize large-scale battles for the capture of cities, planets and spaceships. The game has an advanced role-playing system and deep atmospheric universe. In short.
The Descendants is the MMORPG game that takes place in a deep sci-fi universe in the last times of humanity. The entire game universe carefully designed and based on logical and deep system of science-fiction assumptions. Each event and technology have substantiation. Players during the game will learn more and more details about salvation history of humanity in the universe, familiarize with distinct technologies and interrelated past of 20 playable civilizations.
Our main goal is to create an exciting game mechanics with real freedom of choice - to give players the opportunity to express their individuality in situations developing in accordance with the laws of reality. The variety of possibilities is realized primarily through software solutions, optimized interface, thoughtful mechanics embodied in the compact and versatile forms. Priority is given to the buildup of gameplay interest, immersing the player into the atmosphere of the universe, role-playing system and combat mechanics.

- New addicting gameplay mechanics.
- The dramatic depth of the epic universe.
- Interaction among personalities of players.
- The Ultimate role-playing system.
- Determining the fate of the universe
- Layered strategy of mass joint activity.
- Freedom to interact with the world and environment.
Popular Discussions View All (7)

What is this game about?
descendantsgame

Freedom to interact with the world and environment.
descendantsgame

descendantsgame  [author] Oct 22, 2015 @ 7:36pm
No development is going on, but we are focused on the most important - on the combat system, and space ships postponed. We made a lot of new game mechanics, and therefore constantly iterate and refine the main game loop, and it seems quite fun.We are preparing for the Alpha, and even gave it a separate name - Warsmiths http://descendantsgame.com/warsmiths/ Our task is to bring development to the end so we carefully chop off all secondary, and when there is plenty to choose from - it's become a very satisfying occupation.

descendantsgame  [author] Apr 30, 2015 @ 12:47pm
to: ArmyRanger Free roam in a way of finding missions. Missions are simply as a means to explore the game including the co-op. Mission will help maintain the pace of the game intensive and will provide you with lots of useful rewards and achievements directly affecting the role component. We work hard on alpha which focused not on space battles but on an infinitely generated locations suitable for optimum adjustment of RPG system

Riiivera Mar 13, 2015 @ 10:05pm
Descendants. We have significantly redesigned our goals and soon we will provide a lot of information on what we are currently working. Follow us on https://twitter.com/DescendantsGame

I would love a comment about a developer if the game is still alive.