Store Page
Europa Universalis IV>  Workshop > Legion, Duke of Rockford's Workshop
This item has been removed from the community because it violates Steam Community & Content Guidelines. It is only visible to you. If you believe your item has been removed by mistake, please contact Steam Support.
This item is incompatible with Europa Universalis IV. Please see the instructions page for reasons why this item might not work within Europa Universalis IV.
Current visibility: Hidden
This item will only be visible to you, admins, and anyone marked as a creator.
Current visibility: Friends-only
This item will only be visible in searches to you, your friends, and admins. 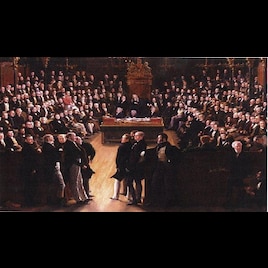 This item has been added to your Subscriptions. Some games will require you to relaunch them before the item will be downloaded.
Description
Official thread on Paradox forum (only viewable for those who registered the game there): http://forum.paradoxplaza.com/forum/showthread.php?782413-Parliamentary-Elections-Mod-for-Britain

1. Description
A mod for parliamentary system in England/Britain, with elections and such. Over 80 events, which all of it except one (one being Glorious Revolution event which is prerequisite for all of those events and can only fire if England (or Great Britain if already formed) is absolute monarchy by year 1688) falls into one of three types of events which is:

2. Events
2.1 General Election
An event where can try to influence an election outcome towards a party, each of which provides certain bonuses and negative modifiers every 7 years. It can be triggered early due to any of 2 events below or by the monarch's death. You will also get to pick a prime minister after 1721 (providing cost reduction for a specific type of tech but penalty for other two types of techs) after conclusion of the election.
2.2 Votes of Confidence
An event that leads to random outcome where ministry could be forced out and replaced with another ministry, parliament dissolved for early election, or they win the vote and stays.
2.3 Conflicts between Monarch and Ministers (Constitutional crisis)
An event where you can choose to dismiss the incumbent ministry with another party to lead the government, dissolve parliament for early election, or keep them.
3. Explanation for Events
Each type of events has benefits and consequences. For example, a particular party you pick in an election might give you a bonus for trade efficiency but gets penalty for naval maintenance. In Vote of Confidence Event, ouster of ministry or dissolution of parliament will result in loss of stability while a triumph of ministry over confidence vote will gain a stability. Finally, in Crisis event, dismissing ministry and replacing it with another ministry will net you a loss of stability, while dismissal of ministry and dissolving parliament for early election will result in loss of stability and a gain of prestige, and then finally choosing to retain ministers will lose you prestige but gain you a stability.
4. Political Parties
There are in total of 7 distinct political parties defined in this mod, although 7th party, the Conservative party, is not available unless you extended the game to 1834 or beyond. Some of those distinct parties actually have same party name but they offered different bonuses/negative effects by virtues of them being distinctly different from their ancestors sharing same party name. In localisation, there is actually 8 named parties, as Patriot Whig actually uses same defines as old Whig party, as they considered themselves the heir of Whig mantle as against Sir Robert Walpole whom they saw as going back on Whig ideology.The named/defined political parties are:
Popular Discussions View All (2)

baggyb Jan 12 @ 7:32am
This looks amazing - is there going to be an update to make it compatible again?

I tried to make a completely new file in /governments or something but it did not work as it failed to prevent other countries from adopting the government type used in this mod while I was testing the game. In fact, the AI ones adopted it long BEFORE the Glorious Revolution event fired at all.

I will need to research this now that it's been a couple patches later and perhaps someone has discovered a solution to this. Will try to give an update on this by the weekend if I can, as I'm currently enrolled part-time in college (history major, w00t!) so I will be slightly busy.

fat Jan 28, 2019 @ 9:44am
Would love an update to this - government mechanics, especially for england/Britain feel lacking.

Legion, Duke of Rockford  [author] Aug 15, 2018 @ 2:00pm
I have also created an official thread for reporting any bugs with this mod under the Discussions tab. Please use them to report it there. Thank you.

Legion, Duke of Rockford  [author] Mar 29, 2018 @ 5:32pm
You're welcome. :) Feel free to provide feedback for this mod either here or in discussions section of this page.