Greenlight > Games > Valmond's Workshop
Greenlight is being retired. For more information on how to submit games to steam, refer to this blog post.
This item has been removed from the community because it violates Steam Community & Content Guidelines. It is only visible to you. If you believe your item has been removed by mistake, please contact Steam Support.
This item is incompatible with Greenlight. Please see the instructions page for reasons why this item might not work within Greenlight.
Current visibility: Hidden
This item will only be visible to you, admins, and anyone marked as a creator.
Current visibility: Friends-only
This item will only be visible in searches to you, your friends, and admins.
a Family of Grave Diggers
Description Discussions1 Announcements14 Comments113 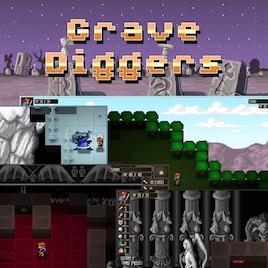 Valmond
Online
See all 18 collections (some may be hidden)

View a Family of Grave Diggers in the store

I just reworked my website [www.mindoki.com], in a little less lugubrious style.

First of all, I am sorry if I missed someone when I told I’d be away for a while, everything happened so fast!

And this is what happened ( full story [www.mindoki.com]): I had decided to take a year off to really finalize the game but time was running out (and for you who follows my devblog on twitter knows there were a lot non game related stuff that slowed everything down too), so I had to get a job!

We, my family and I, lived in Montpellier (it’s on the Mediterranean side of France) but we never really liked it there so we decided to change city as it seemed a good moment of opportunity, and we choose Bordeaux!
So off I were looking for a job, having interviews, doing tests, negotiating salary, start date and so on.
And one day I found both an interesting and okay paying (my girlfriend would leave her job so I have to be the bread hunter for a while), starting early April!

> If you want the full story (with images!) check out my deb-blog Here [www.mindoki.com]!

Long story short, I'm back and development is continuing!

Version 0.0875 is Out with sweet music by Chris Kukla for All the dungeons, bossmusic, village, Towerdefence, swamps and on and on!

It's good to be back!

Read More
Description
Release date: Q1-Q2 of 2016
Descend into the horrors under the village in this modern Roguelike!

Turn-based, technical but with an easy to use interface, play a Rogue-Like without the irks and hassles of the genre!
Get stronger by modifying the village, get new shopkeepers (and items for them!) so that your next run will be easier and funnier!

Visit dungeons, dangerous forests, a wizard tower and a lot more in:

For a more in depth description, continue to read.
The game uses SDL and opengl so it's actually full 3D (as you can see in one of the debug screenshots), I'll probably make something out of that.
It's coded in C++ and Lua because the game is supposed to be as close as 100% moddable as it can be.
Exceptions are the core game mechanics like, you walk around on a map, it is turnbased...
Today, stats, fights, monsters, items etcetera are fully modifiable, just add a Lua script for an item and add it in the script that 'drops' items plus an icon or two and there you are, a new battleaxe!
The game is also aimed to be fully keyboard playable (even without the numpad for sweet laptop experience).

Today it is English on Windows only as I'm concentrating on finishing the game itself but when it's ready, possible developments might be Mac/Linux and other languages (French, Spanish, Russian...)

If you want to check out the development, I have a devblog [www.imbroglio-online.com] and a twitter where I sometimes twitt.

The Early Access is mostly for playtesting/tweaking/finding the last bugs while in the meantime the last 20-30% of the games content gets added.
Popular Discussions View All (1)

a Family of Grave Diggers has been Greenlit and is now listed in the Steam store. For the latest information, purchase options, and discussions for a Family of Grave Diggers, please see it on the Steam Store or in the Steam Community.
Visit Store Page
For more details Visit Community Hub
For latest discussions
If you really, really want to, you can continue to the Greenlight page. Information on this page may be out of date, since all the action has moved to the areas noted above.