Greenlight > Games > footinthebox's Workshop
Greenlight is being retired. For more information on how to submit games to steam, refer to this blog post.
This item has been removed from the community because it violates Steam Community & Content Guidelines. It is only visible to you. If you believe your item has been removed by mistake, please contact Steam Support.
This item is incompatible with Greenlight. Please see the instructions page for reasons why this item might not work within Greenlight.
Current visibility: Hidden
This item will only be visible to you, admins, and anyone marked as a creator.
Current visibility: Friends-only
This item will only be visible in searches to you, your friends, and admins.
Alchemist Penguin
Description Discussions0 Announcements10 Comments48 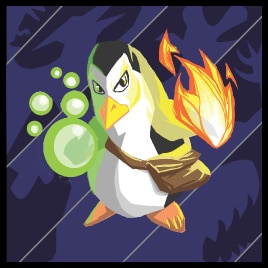 footinthebox
Offline
See all 6 collections (some may be hidden)

View Alchemist Penguin in the store

It's been a long road, but as of just a day or so ago, Alchemist Penguin has been Greenlit. :)

Thank you to everyone who beta tested, Let's Played, voted, contacted us for a bundle, or just gave moral support--we're so excited to be on our way to Steam. :D

Stay tuned,
--The Foot in the Box team

Alchemist Penguin is currently part of Jamesbuc's Itch.io Gems #2 bundle on Groupees! For a minimum of $2, you get a full copy of Alchemist Penguin--as well as a bunch of other DRM-free itch titles spanning multiple genres. More info can be found at https://groupees.com/gems2 .

There's just a little over a week left on the bundle--check it out, and, as always, thank you for the support! :D

You are a penguin, cut off from the rest of your species by a meteor crashing into the Antarctic tundra. Something has been awoken from deep within the ice… Something that once ruled this land and wants to take it back.

Something about their slumber in the ice has advanced their minds significantly, and their crude spears and axes quickly become replaced with more and more sophisticated weapons as time progresses. All that stands between them and the destruction of the world as we know it is you and your knowledge of alchemy.

Take control of the Alchemist Penguin in the relentless battle against his dinosaur aggressors! Alchemist Penguin is an arcade-style action game where you are pitted in a stage against an army of dinosaurs under increasing difficulty. You are armed with a weapon, a potion and a technique—as well as a variety of single-round boosts and mode-specific abilities—to help you in your fight.
< >
48 Comments

Alchemist Penguin has been Greenlit and is now listed in the Steam store. For the latest information, purchase options, and discussions for Alchemist Penguin, please see it on the Steam Store or in the Steam Community.
Visit Store Page
For more details Visit Community Hub
For latest discussions
If you really, really want to, you can continue to the Greenlight page. Information on this page may be out of date, since all the action has moved to the areas noted above.