Greenlight > Games > CINEVEO's Workshop
Greenlight is being retired. For more information on how to submit games to steam, refer to this blog post.
This item has been removed from the community because it violates Steam Community & Content Guidelines. It is only visible to you. If you believe your item has been removed by mistake, please contact Steam Support.
This item is incompatible with Greenlight. Please see the instructions page for reasons why this item might not work within Greenlight.
Current visibility: Hidden
This item will only be visible to you, admins, and anyone marked as a creator.
Current visibility: Friends-only
This item will only be visible in searches to you, your friends, and admins.
CINEVEO - Virtual Reality Cinema
Description Discussions2 Announcements3 Comments151 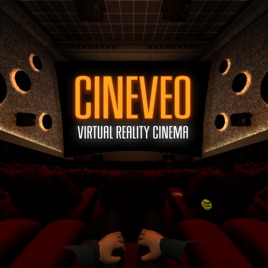 CINEVEO
Offline
See all 11 collections (some may be hidden)

CINEVEO will soon be available in the Steam Store. Thank you very much for supporting CINEVEO!

CINEVEO received a 96% rating from The Rift Arcade. They found it to be the best way to watch 2D & 3D content in the Oculus Rift.

Read More
Description
Release date: November 9th, 2014
With CINEVEO you can simulate your own personal movie theater and watch your 2D & 3D videos in "6" amazing virtual reality cinemas with the Oculus Rift.
CINEVEO is much more than just a VR video player for the Oculus Rift. With CINEVEO, you can experience the future of cinema at its finest. CINEVEO let's you simulate your own fully functional movie theater in virtual reality, with an unprecedented level of detail and sense of immersion. Science-fiction has become reality. Grab some popcorn, it's movie time!

CINEVEO comes with "6" amazing virtual reality cinema themes such as a 1960s Drive-In Theater, a 4D Movie Theater, a Space Station, The Ocean, a Haunted Valley and The Void. But that's not all. CINEVEO can play any 2D & 3D video file, features unique hands-free controls, multiplayer audience and you can use your webcam as window to the outside world.

FEATURES
• Six Cinema Themes - 60s Drive-In, 4D Movie Theater, Space Station, Ocean, Haunted Valley & The Void.
• Plays 2D & 3D Videos - Plays all video formats smoothly (AVI, MP4, MOV, WMV & MKV).
• Movie Subtitle Support - Watch movies with subtitles in any language.
• Watch 3D Movies - Plays 3D videos in SBS and Over / Under with a superb 3D effect.
• Customizable Cinema Screen – You can change the size and the shape (curved or flat screen).
• Hands-Free Interface Controls - Control the app without keyboard or mouse.
• Multiplayer Audience - Sit alone in the cinema or with a live audience made up of real people.
• Webcam Video - Use your webcam in VR to see what is going on around you in the real world.

Watch your 2D & 3D videos in the most advanced VR simulation of a movie theater ever created for the Oculus Rift. Experience total immersion and the sensation of presence in a real movie theater. Sit in the best seat the movie theater has to offer (center row) and choose how far you want to be away from the cinema screen (7 positions). Choose to sit alone in the theater or with a live multi-player audience made up of real CINEVEO users. Activate the innovative 4D ambient lighting effects, which extend the movie beyond the cinema screen, by creating an ambient atmosphere in the theater room using light and colors matching those of the movie you are watching.

Inspired by the 1960's drive-in cinemas that were all the rage throughout the United States, CINEVEO's 60s Drive-in Movie Theater theme is the most detailed and immersive VR cinema environment ever created for the Oculus Rift. You get to sit in a virtual 1958 Buick convertible, with a fully modeled interior and exterior. The modelling of the Buick is amazingly detailed with an accurate sense of scale, giving the car a realistic feel and making the cinema screen look massive. Both head and positional-tracking are used to let you lean around the car for a closer look at its detailing. Look behind and you willll spot a detailed road-side diner with restroom building, projector tower, car speakers and neon bilboard. The drive-in theater is located on a vast hill above a virtual Los Angeles cityscape, complete with animated birds and planes. Watch a movie for long enough and a giant passenger plane will also roar overhead.

Watch your 2D & 3D videos on a space station orbiting earth and observe how the universe slowly rotates around you. Feel what it's like to be an astronaut aboard the CINEVEO space station and enjoy a good movie on the shielded leisure platform at sector 17.

Watch your 2D & 3D videos while gently drifting on the ocean in a little wooden rowboat. The Ocean theme features an ultra-realistic and incredibly immersive environment that feels alive and natural. This cinema theme includes a photo-realistic lighthouse, ships, as well as flocks of birds flying around. Your rowboat dances softly with the waves and the reflection of the cinema screen shimmers on the surface of the ocean. When you pause the movie you are watching, you will hear the sound of the waves, the seagulls singing and ships blowing their signal horns in the distance.

Special features: The ghost of a girl haunts this theme.

The Haunted Valley theme features an eery environment that will give you the shivers. It's great for watching horror movies. This cinema theme is haunted by little Lucy, the ghost of a 12 year old girl that disappeared in 1894. Lucy does not like it very much when strangers are around. Be prepared, as she will not hesitate to give you a scare once in a while. You can spot Lucy in four locations at random times if you keep your eyes peeled. Are you ready for little Lucy?

THE VOID THEME
Special features: Just the screen and you in empty space.

The Void, as the name already reveals, features a completely distraction free environment in pitch black darkness. This cinema theme is not recommended for people with Nyctophobia (fear of darkness).

INNOVATIVE HANDS-FREE INTERFACES
Control all essential functionalites of CINEVEO without having to touch your keyboard or mouse. Select video files to play, pause a video, change the volume, etc. using just the Rift and head movements.

USE A WEBCAM AS WINDOW TO THE REAL WORLD
Connect a webcam and CINEVEO will show a live video feed on a virtual monitor. You can see what is going on around you in the real world, while you are watching a movie.

WATCH ALONE OR WITH A MULTIPLAYER AUDIENCE
Choose to sit alone in the movie theater or with a multiplayer audience made up of real CINEVEO users. You can even see the head movements of each audience member in real-time.

Ing Feb 1, 2015 @ 12:56am
inb4 someone gets a movie thats stilll in theaters and makes an in game movie theater-movie-movie theater

CINEVEO - Virtual Reality Cinema has been Greenlit and is now listed in the Steam store. For the latest information, purchase options, and discussions for CINEVEO - Virtual Reality Cinema, please see it on the Steam Store or in the Steam Community.
Visit Store Page
For more details Visit Community Hub
For latest discussions
If you really, really want to, you can continue to the Greenlight page. Information on this page may be out of date, since all the action has moved to the areas noted above.