Store Page
Arma 3>  Workshop > shay_gman's Workshop
This item has been removed from the community because it violates Steam Community & Content Guidelines. It is only visible to you. If you believe your item has been removed by mistake, please contact Steam Support.
This item is incompatible with Arma 3. Please see the instructions page for reasons why this item might not work within Arma 3.
Current visibility: Hidden
This item will only be visible to you, admins, and anyone marked as a creator.
Current visibility: Friends-only
This item will only be visible in searches to you, your friends, and admins. 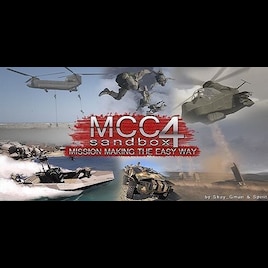 shay_gman
Offline
See all 18864 collections (some may be hidden)

This item has been added to your Subscriptions. Some games will require you to relaunch them before the item will be downloaded.
Description
Join our Discord Channel and our server
https://discord.gg/3DzkzAn
MCC Wikia page
http://mccsandbox.wikia.com/wiki/MCCSandbox_Wiki

So what is MCC Sandbox exactly?
"A powerful tool that takes control of any mission you’re running." - Rock, Paper, Shotgun - July 12TH 2013.

MCC Sandbox with its integrated advanced AI system (GAIA) is Freedom.
You can do anything you ever dreamed of in ArmA without knowing even one script command.

Either you play PvP, Co-op or survival, It will change the way you play ArmA forever.

Inspired be VBS and it's in game real time editor we tried to create something similar that will let any player as the role of an instructor or as we call him the mission maker, to create different real life scenarios and put them to the test. Then he can alter and change the mission progress as he see fit in order to give the other players a more divert and intense experience. MCC support role/kits selection and it's build to work on dedicated servers. MCC will save the player progress and let him unlock new gear, weapons, scopes and uniforms.
You can create missions without any scripting knowladge and alter them in while in game. You can save your missions and share with friends.
MCC expends Zeus and ads more variety to it.


Support us in Make ArmA Not War:
http://makearmanotwar.com/entry/EbPhuUe5nR#.VGH2aTSqk0D

You'll get:
Custom AI Behavior – GAIA an new AI level like no other, AI will fortify in buildings, place mines, throw smoke grenades, use empty vehicles, suppress with automatic rifles, flank, call CAS and artillery and much more.

Mission Generator – Define your game style and the amount of players and press "Generate" and MCC will generate random, suprising fully voice narrating with up to 20 different objectives.

3D editor – You can place units and object in 3D save them, load them, add some unique presets for them.

Group generator – You can create any custom made group you'll like and place on the battlefield, plus you can control any MCC's placed or preplaced AI group and give it new waypoints and behaviors.

Box Generator – Spawn a box with any items, weapons etc. you'd like.
Set time and weather – Change the mission set and atmosphere.

Client setting – Client's can adjust view distance and grass density to save some CPU load.

IED – Place IEDs that are only detonated by spotters or pressyre plates. Place ambush groups link it to an IED or link IED together to create a daisy chain effect. Define if an IED radio trigger can be scrambled by specific vehicles.

Armed Civilans – Place arme civilans that will suprise the players as the approch and open fire. The players can neutralize and even capture the armed civilians.

Suicide Bombers – Place Suicide bombers that will chase the players and explode once they get near.

Convoy Generator – Create custom AI convoy that will keep in formation and even spawn with HVT inside.

Unit Managment – Manage any units on the battlefield. Hijack and play as any AI, teleport the AI, make them do a HALO jump and more.

IED, Minefields, Armed Civilians and Suicide Bombers – Diverse you battlefield with advanced IED module, place an IED connect it to a spotter or make it proximity mine. Determine the time it will take disarm it, how far unit should be close to it to get it off, what kind of damage will it make, do we want to kill the players, scare them or wound them?

MCC is a tool build for MP and dedicated servers, any thing you'll do will be done on the remote server or on the Headless Client and not locally on the player client.

That way this tool can support lots of players and abuse as it doesn't strain the client.

You can restrict MCC to admin only, players or roles.

DeathCabForKids Nov 10 @ 3:34pm
I'm having trouble I don't know whats wrong whenever I put down a zone and make the mission sometimes it just doesn't work and doesn't put in the AI and sometimes it does but when it does my graphics look really weird.

kgiris2005 Oct 31 @ 11:06am
oops turns out if your using CUP maps i think you NEED the extra CUP mods as well otherwise you get errors.

xray Oct 19 @ 8:48am
Modded units not appearing on Zeus, only a selected few are there but not all.

Unknown.png Sep 22 @ 7:58am
Is the Weapon Shop still broken? Having the same issues with this as I had 1-2 years ago when I tried using this for the weapon shop module. I followed the tutorial on youtube sync it all up and it doesnt work.

Very Scary Sep 5 @ 6:39am
Why does everything burn from an ordinary grenade?

deviousranger Sep 3 @ 7:17pm
cann anyone else go into 3rd person anymore with mmc now i used to but every time i enable it it automatically disables it
< >