Store Page
Sonic Generations > Guides > BluR_G's Guides
This item has been removed from the community because it violates Steam Community & Content Guidelines. It is only visible to you. If you believe your item has been removed by mistake, please contact Steam Support.
This item is incompatible with Sonic Generations. Please see the instructions page for reasons why this item might not work within Sonic Generations.
Current visibility: Hidden
This item will only be visible to you, admins, and anyone marked as a creator.
Current visibility: Friends-only
This item will only be visible in searches to you, your friends, and admins.

How to Edit Physics in Sonic Generations
By BluR_G
Have you always wanted Sonic to jump high, or make him run a little faster? Or maybe have Sonic do something that no one else thought of before? In this guide, we'll go over step by step of how to change up the physics like never before.

Step 4: Putting things back together

Comments
Materials
Before we start, there are few things that you'll need to accquire before you start:

Step 1: QuickBMS
Before we get started, you'll need to create a backup for the certain file known as "bb3". This is where both the physics of Classic and Modern Sonic are located. To locate it, you need to follow this path: C:\Program Files (x86)\Steam\SteamApps\common\Sonic Generations\disk\ Once you found the bb3 file, copy and paste it somewhere in a folder that you'll be using along with all the other program to use + an empty folder (which we will get to later. 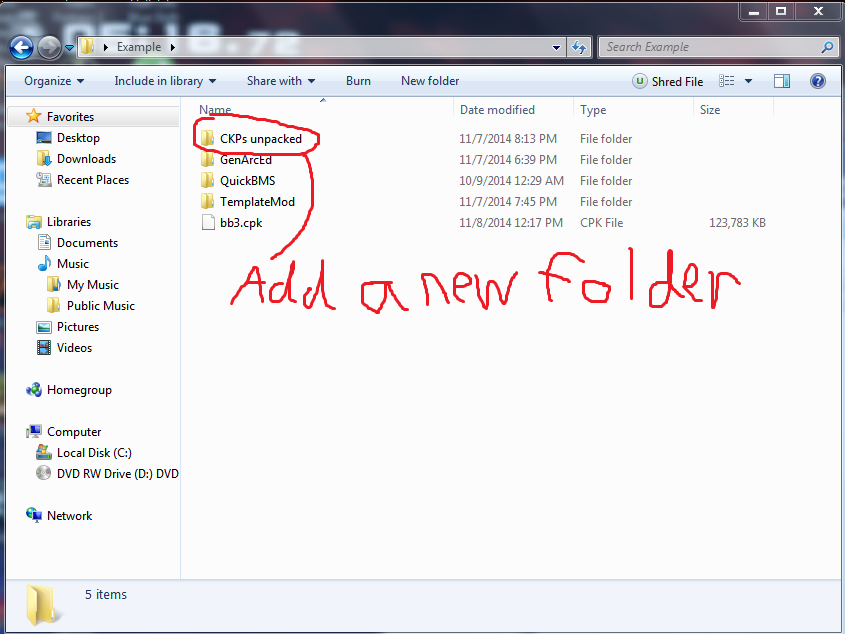 I recommanded having all of your tools in a single folder.

Next, go to a folder named "QuickBMS", then click on a "quickbms" application, and it should appear like this. 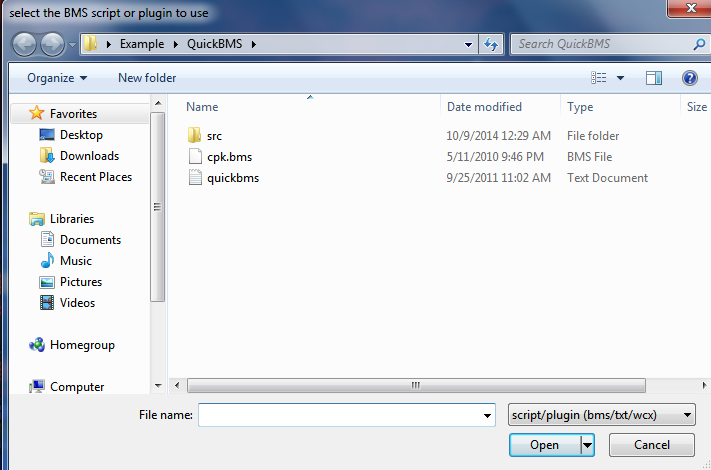 Just simply click on a cpk that is showen for you. If the folder location isn't where it was suppose to be in when you first open it up, simply re-find the QuickBMS folder and you should see it.

After you click it, another window will pop up telling you to "select the input archives/files to extract" Which means to select that bb3 file that we just made as a backup. Once selected, another window will pop up to let us select a folder to save in, so just simply save onto the empty folder where all of the CPK file will be in. Now we wait for the CPK to be extracted. It may take several seconds.

Once its done, you should see this in one of your folder that you've decided to place it in: 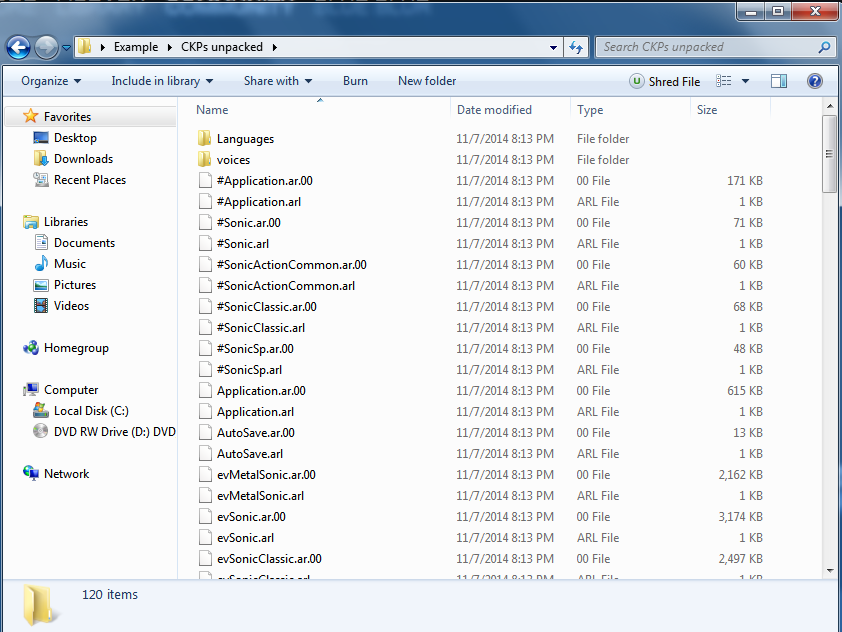 If everthing is planned out well. Proceed to step number 2. 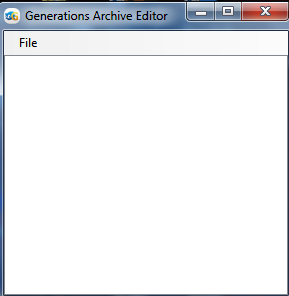 Nothing to do here here right now. So go to 'file' and then 'open', and it should ask you to find the 'ar' file. So natually, go and find the folder with all of the CPK files are which was extracted from the 'bb3' (So in that case, I have to go and find my 'CPKs unpacked' folder) Once you found it, ignore all of the random files showen to you and stick to the two main files that you'll focus on, depending if you want to edit the physics with Modern or Classic Sonic. 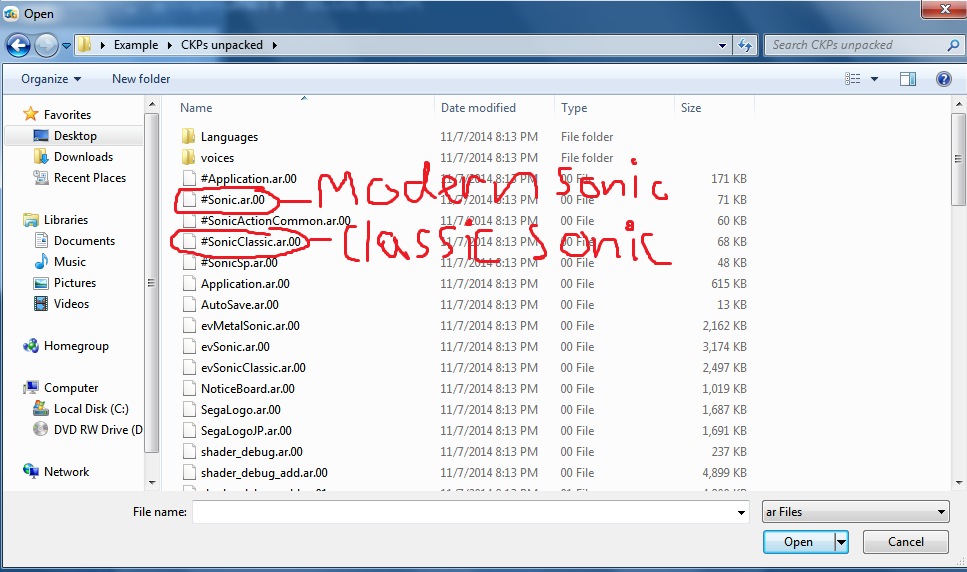 For now, we'll be going with Modern Sonic because this is what people tend to focus on the most and we will have a bit more options than Classic Sonic. So after we open it, This is what will happen to "Generations Archive Editor". 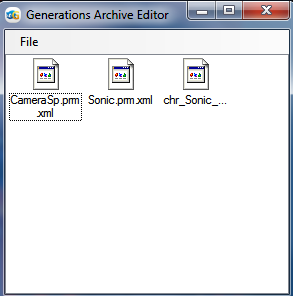 The only file we'll be going for is the "Sonic.prm.xml" So simply extract that file to whatever you want it to be in, but DON'T EXIT OUT ON ARCHIVE EDITOR JUST YET, we'll get back to it later (if you did exit out of it, just re-open Archive Editor and find the exact same 'ar' file that you were using). Afterwards, go and right click to the extracted xml file you created and click on "Edit with XML notepad" and we'll come to the best part of all...
Step 3: Editing the Physics!
Behold. 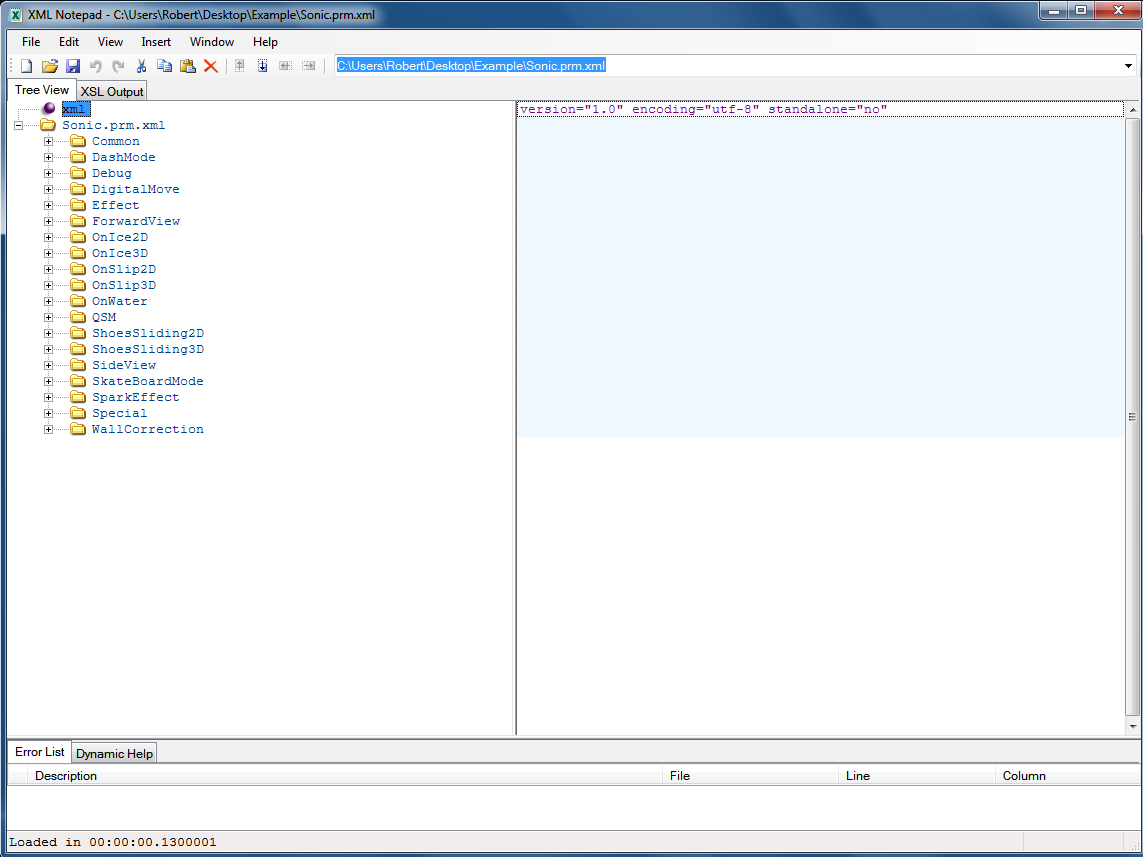 This is where you are free to have fun and edit lot of things. There stuff like common. Which adjust, well, common things like boosting, items, all that stuff. but the 2 important folders that people focus on the most is FowardView and SideView.

FowardView focuses on the physics mainly on 3d sections of the game and SideView focuses on physics mostly in 2d sections of the game. Simple as that. But that also means that if you wanted to let say have Sonic jump higher regardless of which section he is, you have to adjust the jump power both on the FowardView and SideView. As for Classic Sonic, since his gameplay is mainly in 2d, you only need to adjust the SideView only and leave FowardView alone.

Most adjustments are mostly in numbers, but sometimes you have to change rather it should be true or false.
Example:

So let go for an example. Lets say that I wanted to get rid of the boost completly and have faster homing attack. So for the boost removal, I go to the common folder and I go to ChaosEnergy, over there I would go to BoostEnableChaosEnergy and adjust the number from 1 to 1000. And for some reason, that'll make you unable to boost. So for all the people who hates the "Boost to Win" mechanic and wants to get rid of it, here the solution for ya.

And now for the Homing attack, I go to FowardView folder first, then I go to HomingAttack which I should find HomingSpeed option, than I adjust it from 70 to 130, then I do the same for SIdeView. So now it should fell a lot snappier the next time he homing attack.

Once you feel satisfied about what you've done. Just simply save the xml and then go onto the next step.

Step 4: Putting things back together
Once you saved the xml and exit out of XMl notepad, it's now time to put them all back together. First, if you have "Generations Archive Editor" still on while you were editing the physics, delete the file as showen below: 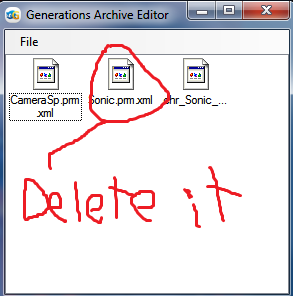 This is an unedited xml file, so we won't be needing this anymore

Once you deleted it, replace it with the xml file that you edited with into the Archive Editor 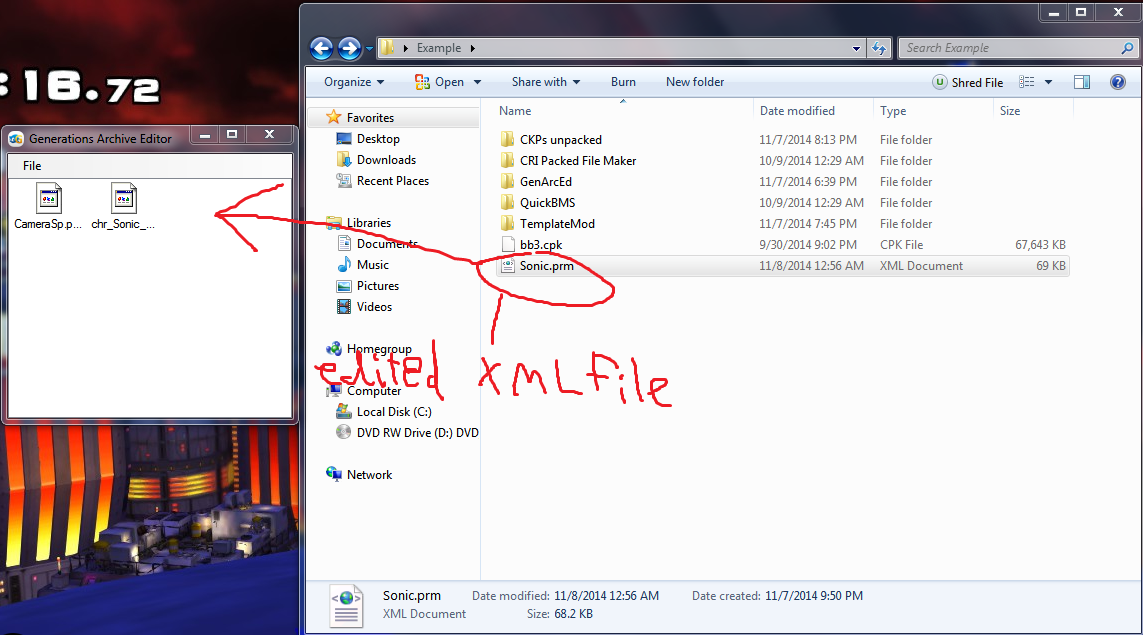 Afterwards, save the Archive Editor and exit the program. Now you should have an edited xml file inside your 'ar' file. Onto the very last step.


Step 5: Testing it out!
So you are now ready to test out your new physics. But how are you suppose to do that you may ask? The answer is a TemplateMod. If your familiar with the mods in Sonic Generations, you would notice that most mods are always in these special made folder, which will make the mod to appear onto SonicGMI. If you have a TemplateMod folder (If not, go back to the "materials" section and you'll see a download link for it) Go a head and open it, it should look like this: 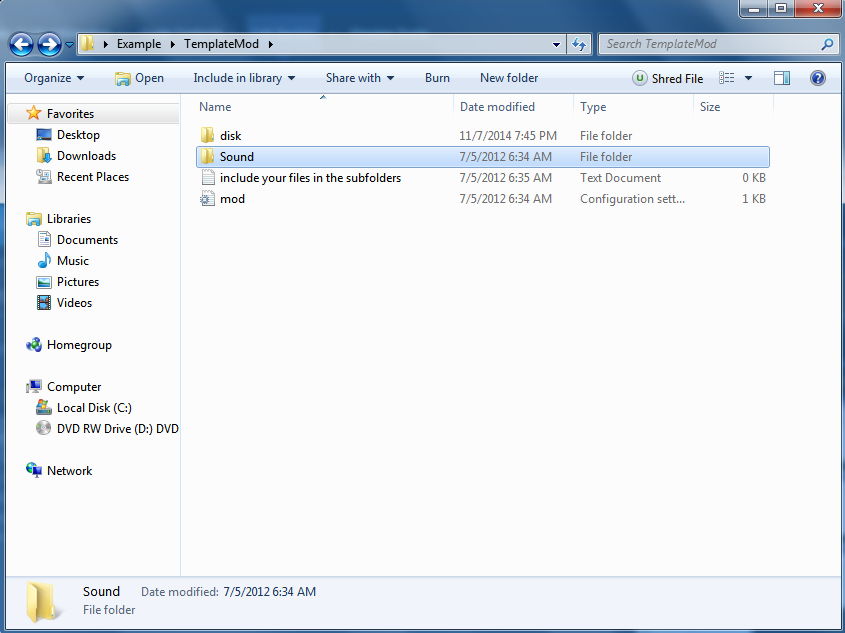 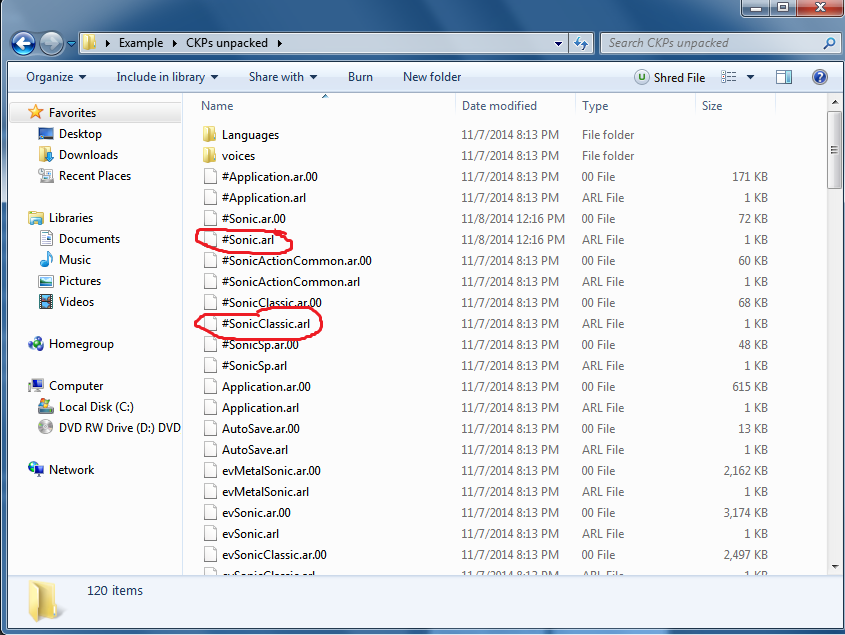 After that, you're done!

Note: if your physics mod doens't seem to go well while in game and you wanna change it. Just go back to your xml file to edit out a few changes and simply repeat step 5 of this guide, nothing has been removed throughout this beside the old 'xml' file that you wouldn't be using anymore (unless you manually delete something)

Conclusion
That is it for this guide. I hope you'll have fun changing stuff up with the physics and learn a few things along the way. If you want to show your mod to the public. Use something like Mediafire for people to download. If you got questions to ask. Leave a comment, I will gladly reply.
< >
23 Comments

gamerz31w Oct 25, 2020 @ 4:33pm
How to make custom directional gravity,3D Classic Sonic gameplay,fisheye lens? How to extract Tiara Boobowski from Sonic World into Sonic Generations? Will someone who created Sonic Generations modding tools consider in future to add new playable characters instead of just swapping them?

gamerz31w Oct 25, 2020 @ 4:26pm
Still hoping somebody eventually cracks being able to add levels to Generations instead of just replacing them. When it will be possible?

Maria Robotnik the Hedgehog Mar 13, 2020 @ 4:52pm
please update this, it's no longer valid to this day, a lot has changed, especially with QuickBMS... It no longer has the src folder or the cpk.bms file in it, and the GenArcEd part is no longer valid either... The entire guide is invalid now when you think about it, nothing is the same, in the steam files for Sonic Generations, it doesn't show anything for the characters, it shows Disk, movie, redist, sound, work, configurationtools, defaultinput, eula_de-de to eula_it-it, IncludeApp, installscript, SonicGenerations executable file, Steam_API and Steam_appid, and in none of the folders above the configurationtool executable file contains anything for characters

Mr. Rogers Feb 22, 2019 @ 2:43pm
Okay, im pretty sure that this is a dead chat, but imma try anyways. So ill also try to keep this simple. I've change the physics to just the way i like it, however! Whenever sonic gets off the Board, whether in City Escape or elsewhere, it causes the came to crash. Im asking if anyone knows what code specifically causes this. Because i dont wanna restart.

2. I'm not to sure, you got to experiment on your own (It can be somewhere in the 'HomingAttack' folder)

3.You should find it in the 'WallJump' folder in both 'ForwardView' and 'SideView' folder.

1. How do I increase or decrease speed/power? (EG : Increase Homing Attack Speed)
2. How do I get a longer homing attack range?
3.What are the files for the wall jump physics? I kinda want to make Sonic have a faster wall jump ability.

Thats all Thanks for the help!