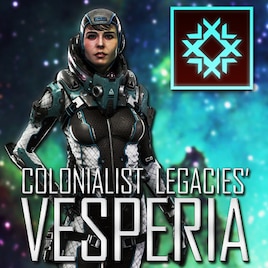 This item has been added to your Subscriptions. Some games will require you to relaunch them before the item will be downloaded.
In 2 collections by TPangolin
TPangolin's Recommended B.E Mods

In this mod you'll play as Noémie Leifsdóttir, Astro-cartographer of the mighty Vesperian Confederacy. Biologically, Leifsdóttir may very well be the youngest amongst the Sponsor leaders. The fact of the matter however, is that although she has only spent 32 of her years "awake", she has been alive far longer than anyone to arrive on this new world. It remains true to this day, that Leifsdóttir is humanity's most well travelled explorer - in both distance and years spent travelling.

Please rate this mod up! 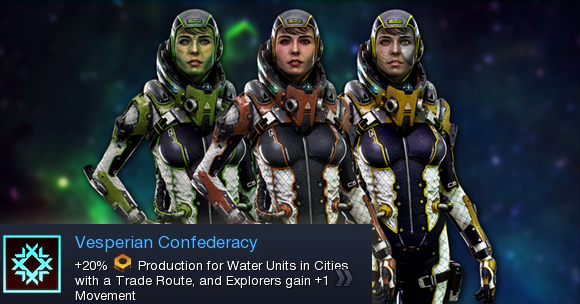 From Sea to Sea - Cities with a Trade Route gain +20% Production for Water Units, and Explorers gain +1 Movement.

Many events prior to the Great Mistake helped make room for the confederacy of Canada to brush aside her former masters and emerge a truly independent regional power. The first opportunity came from the weakening of the USA. As time went on in the 21st century, the once mighty USA had lost much of its imperial authority over the world. With their neighbor in disarray, Alaska was easily annexed peacefully into the confederacy, and the North West Passage was declared Canadian Territory; with rising climate temperatures the northern sea lanes became lucrative trade lanes to own. Seeking a new image, Canada adopted the name "Vesperia", meaning "Land of the the Evening Star".

The second major opportunity came from the great migration that had begun to occur from the south to the north. A combination of climate change creating desertification in the south, and the civil unrest throughout the former United States caused many refugees to migrate to the US/Vesperian borders. This influx in population brought a lot of people from all walks of life into the Great White North; many of these people fleeing the south were of the intelligent caste – doctors, engineers, scientists, skilled labor, etc. – all looking for peace and security.

The final great opportunity that came, was the Great Mistake itself.

After the events of the Great Mistake a few regional powers managed to maintain stability, The Vesperian Confederacy being one of them.

Being vulnerable to invasion from PAC and the Slavic Fed, the various independent Northern Russian states met with a Canadian delegation and joined the confederation. This amalgamation of northern nations caught the attention of the remaining Northerners - Norway, Sweden, Finland, Greenland, and Iceland. It didn't take much for the Scandinavia, Greenland or Iceland to join - seeing the economic and strategic benefits of monopolizing the Arctic circle they all agreed to create one confederated nation under the banner of the Vesperian Confederacy. Looking to head beyond earth, many candidates were considered, but renowned astrocartographer, Noémie Gauthier was chosen in the end. Adopting the last name Leifsdóttir (meaning "daughter of Leif", the viking explorer who discovered the Americas), she leads a voyage to the stars, carrying aloft the hopes and dreams of millions of Vesperians back home.

More lore is available on request and can all be found in the Civilopedia!
-----

1. Download 7zip (it's freeware, and takes next to no time to install)
2. Download the CivBEMod file
3. Place the CivBEMod in MyDocuments> MyGames> Sid Meiers Civilization BE> MODS
4. Right click the CivBEMod file and select 7zip -> Extract to "Colonialist Legacies - (insert civilization here)
5. Start the game up and hit Mods
6. Enable the mod
7. Play the game

Note: Currently, the 2D leaderscene will only show up if you set your Leader Quality to Minimal. Nothing I can do about this until Firaxis patches it as they did for Civ V, or some other way around this issue becomes apparent.
< >
108 Comments

Thanks for all the support!

sacredjunglepanther Feb 3, 2016 @ 6:19am
PLEASE give us an updated version for Rising Tide. Pretty Please.