Greenlight > Games > Mutated Scott's Workshop
Greenlight is being retired. For more information on how to submit games to steam, refer to this blog post.
This item has been removed from the community because it violates Steam Community & Content Guidelines. It is only visible to you. If you believe your item has been removed by mistake, please contact Steam Support.
This item is incompatible with Greenlight. Please see the instructions page for reasons why this item might not work within Greenlight.
Current visibility: Hidden
This item will only be visible to you, admins, and anyone marked as a creator.
Current visibility: Friends-only
This item will only be visible in searches to you, your friends, and admins.
Blue-Collar Astronaut
Description Discussions2 Announcements8 Comments113 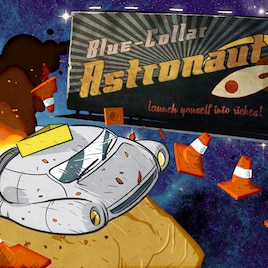 Mutated Scott
Offline
See all 16 collections (some may be hidden)

View Blue-Collar Astronaut in the store

Charlie Armour did the OST on Blue-Collar Astronaut, and you can listen to more of his work here[soundcloud.com].... which I think you should. Because it's great.

We're plugging away at getting Blue-Collar Astronaut feature complete and in alpha sometime very soon. So... we need beta testers. If you're interested, submit your email at our official site[blue-collarastronaut.com]. If you're the type that can weather the occasional bug and enjoys providing feedback on a work in progress then we'd love to work with you to make Blue-Collar Astronaut the best game possible!

A new trailer is also under works

Things get a bit more frantic in the later game :)

Read More
Description
Release date: March 14th 2017
Pilot explosion-prone spacecraft for a living in glorious hand-drawn 2D complemented by an original sound track! Inspired by the controls and gameplay of Atari classics, Blue-Collar Astronaut takes that retro game feel into the modern era and couples it with a mechanically told narrative on working class life that will leave you thinking.

I'm a huge fan of old school Atari games like Lunar Lander, Missile Command, and Asteroids. I think a lot of what made those games so successful (and why they continue to be successful) is how approachable they are. For instance, Lunar Lander just has 3 buttons - left/right buttons and a throttle (as is the case with Blue-Collar Astronaut). It doesn't take long to get a feel for controls like that.

These classics also coupled those intuitive controls with gameplay that progressively gets more challenging and entertaining. This is especially an area that Blue-Collar Astronaut focuses on. Expect surprises and twists on mechanics as you progress through to over 40 levels.

I was inspired by Jonathan Blow's talk: Video Game and the Human Condition to give the player something to think about as they put the game down. The goal for Mutated Software is to join the growing number of developers that are trying to make game experiences about more than just escapism. Blue-Collar Astronaut will touch on debt and working class living through a subtle near-wordless narrative that's meant more as a conversation starter than a treatise.

The Driver’s Ed levels are feature complete, but they’ll still be undergoing tweaks and polishing before the final release based on player feedback. There are also two more level sets yet to be completed. What are those other two sets of levels? I’m so glad you asked!

Pizza Delivery
These levels come with a more nimble ship and are focused around delivering as many ‘zas as possible before time runs out or completing a circuit of pizza related tasks. The universe really begins to take shape during these levels as you go from a lively planet to a busy super space highway (for some Frogger like action) to appeasing a giant pizza eating robot.

The trucker levels come bundled with some procedural generation making each level play differently every time. On top of that, a number of new environmental challenges await, such as dealing with explosives, asteroids, and the ever dangerous cruise ship towing. On top of on top of all that, just pulling around the various trailers adds a whole new challenge to the core gameplay.

And that's it for now. Feel free to ask me anything. Thanks for checking Blue-Collar Astronaut out!
< >
113 Comments

Mutated Scott  [author] Jan 2, 2017 @ 12:56pm
Sorry for the lack of updates. It's a solo developer project that is SOOOOOO close now. I'll put up a more recent trailer in a second. Got some exciting new in the upcoming weeks though! Thanks for checking by everyone!

Blue-Collar Astronaut has been Greenlit and is now listed in the Steam store. For the latest information, purchase options, and discussions for Blue-Collar Astronaut, please see it on the Steam Store or in the Steam Community.
Visit Store Page
For more details Visit Community Hub
For latest discussions
If you really, really want to, you can continue to the Greenlight page. Information on this page may be out of date, since all the action has moved to the areas noted above.