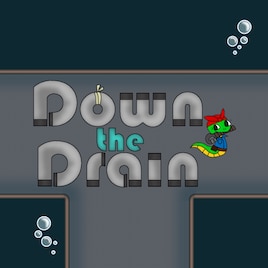 lorichu
Offline
See all 2 collections (some may be hidden)
Kickstarter
Thanks for your support!

We now have a demo of our current build of Down the Drain available for free download!

Click this link for the demo. This build does require an Xbox 360 Controller to play.

Next week is GDC 2015, and we will be using this downloadable build to demo our games at booth PL205 in the GDC Play area. If you're at the Expo and have some time, why not stop on by?

It has been pretty quite here for a while, but we have been hard at work!

For starters, there is now a new video with some new footage up!

Secondly, we have launched a Kickstarter campaign for both of our games currently in development! Check out the link in the side bar to get to the project. Share or donate if you can, and post any comments or questions!

Finally, we will be showing off our current builds of both games at IndieCade East 2015 in New York City on Saturday, February 14th!

For more information on IndieCade, follow this link: http://www.indiecade.com/east_2015/

We will have more information coming soon, so stay tuned!

Read More
Description
What is Down the Drain?
Marta, the world's smallest snake plumber, is on a mission to clean out the drains in a flooded town. Swimming her way through the half-sentient goop, Marta's job is to clear the blockage, retrieve any lost items, and make it through the maze of pipes in one piece!

Action, adventure, exploration, and 2D shooting come together in Down the Drain. Explore the pipe mazes while dodging danger, defeating foes, gaining new powers, and collecting items, all the while trying to get to the bottom of what has caused the town to flood.

Current Build Information
-This version of the game is still very early (we are tentatively targeting Spring 2016 for release).

-Some sound effects and music tracks are missing/place holders