Beginners Guide to Confrontation Mode
By Sorry Stoat
An introduction to the confrontation mode rules for beginners.

At the top of the screen you will find this part of the user interface. Here you can see the number of activations you and your opponent have, the timer in the middle and the end turn button below it. The icons on either side of the timer are yours(green side) and your opponent's(red side) orders. The first three orders moving outward from the timer are your basic orders, you have a set limit of 2 uses of each of these. Next you have the special order, it has no limit in how many times it can be used over the course of a game; however it consumes a resource called elixir to be used and can only be used once per turn.

The last order is the wait order, at the beginning of each turn the game awards the smaller army a number of wait orders equal to the difference in number of units -1. So if you have 2 units and your opponent has 4 units you would be awarded 1 wait order. The wait order allows you to pass your chance to activate a unit without using up one of your activations. Clicking the icons representing each order whilst you have a unit selected will buff that unit with that order's effect and consume a use. Here we have the Capture Area shown as outlined hexagons on the board and the shiny ball of energy is known as an elixir orb. Each turn there is a chance that an elixir orb will spawn somewhere on the map. Players fight over these in order to gain elixir to use special skills and orders attached to each of the Champions. 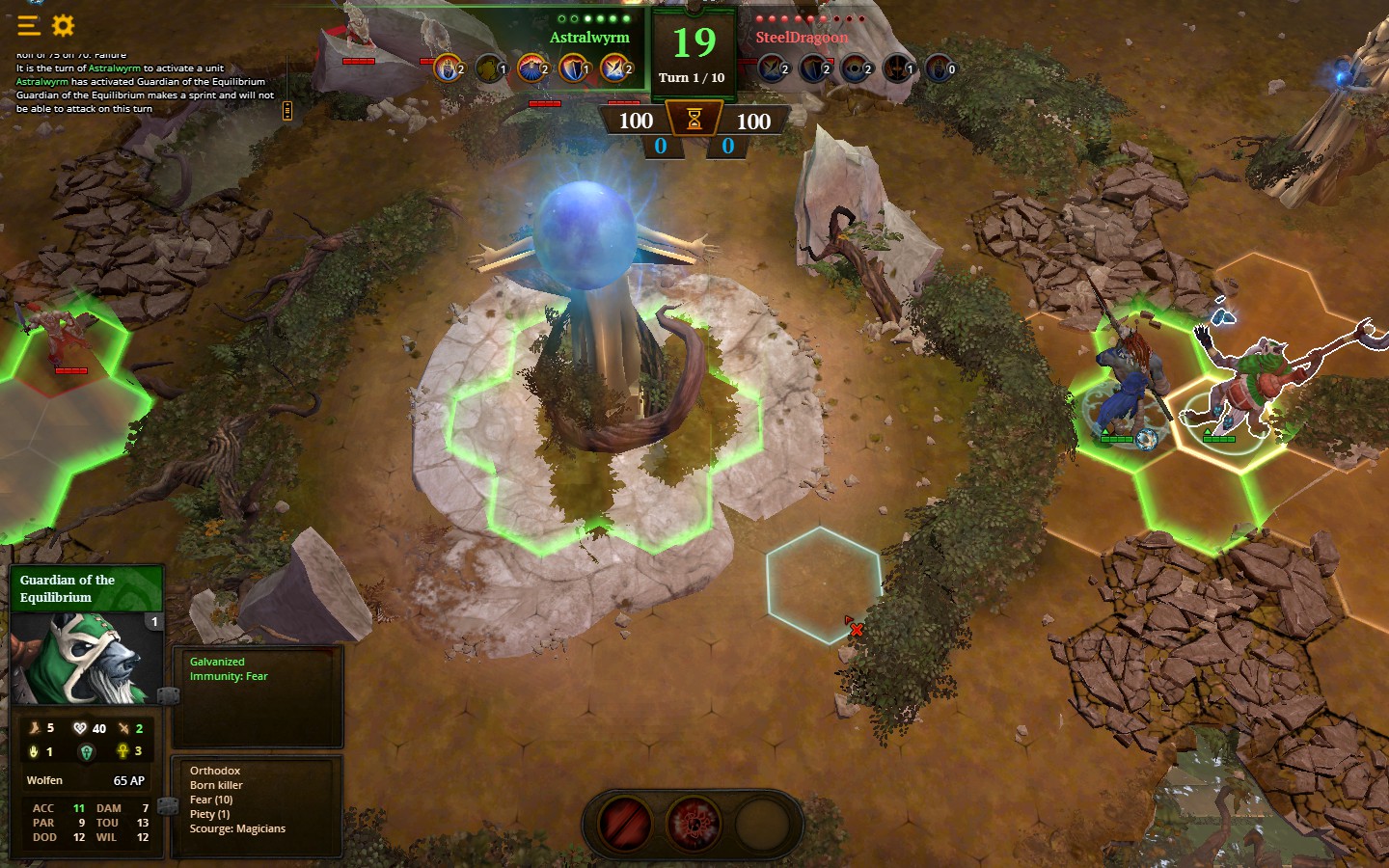 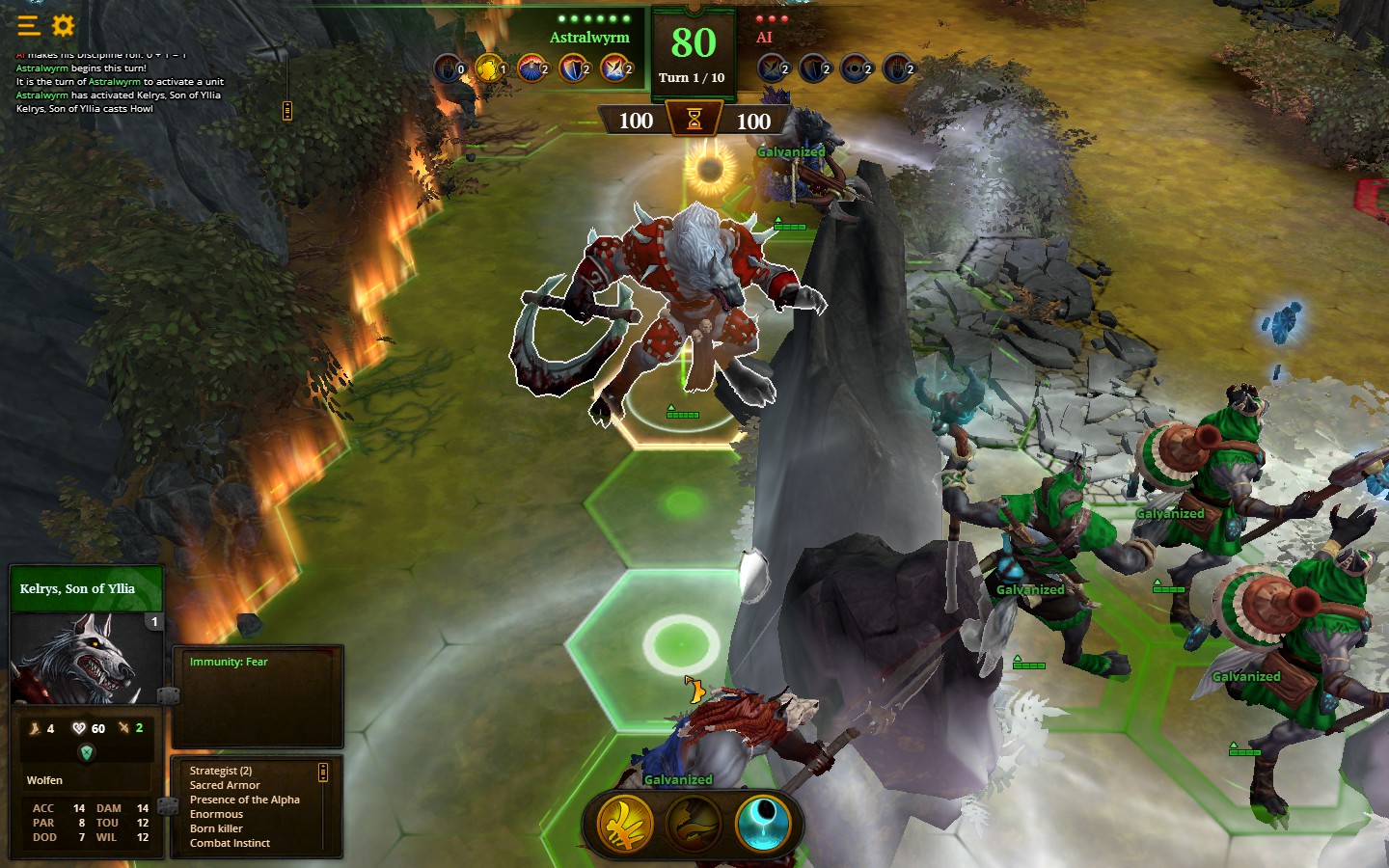 Champions are powerful units who lead their armies into battle and do not take orders. While Champions cannot be targeted with the wait order you can use the wait order without having any troops selected. What basic orders and special orders you can use are determined by what champion you choose to take into battle. The elimination of a champion results in that player no longer being able to give out orders and 3 elixir being awarded to the opponent. Champions also all have a special skill/spell/miracle that consumes elixir.

Tips for using orders.
Offensive Stance- it gives a troop an extra attack however until you next activate that troop their parry is reduced to 0 and they cannot reposte (counter attack).

This order is for when you just need another attack to take down your target, generally the earlier in the turn the bigger risk it is to use this order. Also you'll often want to activate the unit as soon as possible in the next turn to remove the downsides of using this order. It's important to note that having a 0 parry stat doesn't mean they are unable to parry.

Defensive Stance- Until the troop is next activated it gains +6 parry +6 dodge (currently certain parts of the game are bugged and don't mention the dodge boost) but the troop loses 1 attack when making an attack on a enemy unit.

Defensive Stance can be used in many ways, the longer you don't activate your unit with this effect the more you can potentially get out it.

Commanding Shout- When you activate this on a troop you get to use up another activation after that troops activation. It cannot be used twice in a row.

You should be careful not to waste these, they can be used to force your opponent into an unfavorable situation or to get you out of one. Try to look for good combos to take advantage of this with.

Tide of the dead- It is the same as Commanding Shout but it can only be used on Skeleton troops.

Basically this order helps you to be successful in whatever your attempting to do but only while you are doing it. For example you can use this on an archer who is engaged and it will help the archer disengage without being hit by the enemy's attack of opportunity and then help him to successfully shoot at that target. But once your troop's activation is over you lose that buff. It's best to use at a time where you really need lady luck to be on your side, like when your using a melee unit to attack a powerful counter attacker so he can dodge the blows or for when your mage is casting a powerful spell which can fail like Celestial Scourge.

Natural Instinct- +2 damage for every attack this turn.

Pretty simple your troop gets +2 damage for every attack they successfully land during that turn. Typically you want to reserve it for when you need an extra 2 damage to finish off a enemy unit but it can help when enemies attack you as well.

Wait- Postpone your chance to activate a unit.

It is the opposite of Commanding Shout, you might think that is a bad thing but it can help decide games with it's power of doing nothing. Sometimes your forced to activate a unit but you want it's order buff to last a little bit longer because an enemy unit will tear yours to bits. Or you don't want to move forward into the line of fire yet and you want to waste you opponent's activations. The wait order will help you in those kind of situations. Wait can be used without selecting a troop so you can still use it at any time just by deselecting your unit so long as you still have uses left.


If you want to learn some more you can watch Chimeraelite's youtube videos for some extra help and you can also see what the old version of the game looked like if you go back to his oldest videos.