Greenlight > Games > Awesome Enterprises's Workshop
Greenlight is being retired. For more information on how to submit games to steam, refer to this blog post.
This item has been removed from the community because it violates Steam Community & Content Guidelines. It is only visible to you. If you believe your item has been removed by mistake, please contact Steam Support.
This item is incompatible with Greenlight. Please see the instructions page for reasons why this item might not work within Greenlight.
Current visibility: Hidden
This item will only be visible to you, admins, and anyone marked as a creator.
Current visibility: Friends-only
This item will only be visible in searches to you, your friends, and admins.
Massive Cleavage vs Zombies
Description Discussions3 Announcements7 Comments226 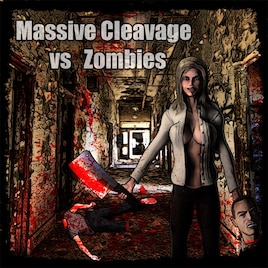 Awesome Enterprises
Offline
See all 17 collections (some may be hidden)

View Massive Cleavage vs Zombies in the store

Massive Cleavage vs Zombies is in the store now, and currently on sale!! I forgot to announce this in July, but that's okay because the discount this week is a lot higher than the launch week discount.

Hi everyone, the game's now #32 on Greenlight, and I have a question for you. If you could choose between having nicer looking animations (with more frames), or getting an extra game mode (top down, third person, 30-60 minutes long). What would you rather have?

The new mode would look like my new zombie game, CHILDREN of the DEAD. Except it would bring over the characters from Massive Cleavage vs Zombies. You can see video and screenshots at http://steamcommunity.com/sharedfiles/filedetails/?id=504396283

Read More
Description
Release date: Available Now for Windows and Xbox 360
What is it?
Your mission is to find BBQ sauce for your people and bring it back to them. Fighting off thousands of zombies with only your massive cleaver and equally massive cleavage.

The game is played with simple arcade mechanics (move left, move right, high attack, low attack), and it starts you off with an easy amount of zombies to re-kill. But each level adds more and more zombies, and eventually dogs that will chew your face off in a couple seconds.

Controller Support
To play with an Xbox 360 controller, you just plug it in and the game uses it. Or if it's wireless you need a wireless USB adapter from Microsoft.

Platform / Language Support
Right now the game is only in English, and for Windows and Xbox 360. But if you want to see a version with a different language or platform, then click the Discussions tab above and start a new discussion asking for it.

If it does get Greenlit, I have Mac and Linux versions that I will also put on Steam.

Available Now for Windows and Xbox 360
You can buy Massive Cleavage vs Zombies for Windows through my Humble Bundle Widget at {LINK REMOVED}http://www.awesome-enterprises.com/MassiveCleavage/ or on the IndieDB page. If it ever gets Greenlit I'll email you a Steam key.

Or you can buy it on your Xbox 360 by searching for "Cleavage", or clicking through twenty tabs and windows until you get to the Xbox Live Indie Games New Releases section.
< >
226 Comments

Awesome Enterprises  [author] May 28, 2016 @ 6:07pm
Probably 2-3 weeks away from being released. I'm just testing it on my laptop right now to make sure it runs smoothly on weaker computers, and fixing a few things.

All the zombies have better attack animations now, there was actually a bug that was only showing their first frame. And half of the zombies got extra frames in their walking animations. But it is still programmer art, so it won't be winning any awards for the animations. :)

My new levels are in, there's just five of them but I think they provide nice eye candy, and a break for anyone playing the game in one sitting. In the new levels it's top down and you run around with a cleaver and an AK47.

CyberInferno Mar 23, 2016 @ 11:05am
Thanks for the updates. This is one of the few games in my library that I actually completed the same day I bought it. It was simple but fun. Looking forward to getting it on my Steam account!

Awesome Enterprises  [author] Feb 9, 2016 @ 10:17am
Haha, or Gaben just loves HD. They have no problem with cleavage in trading cards and backgrounds.

Awesome Enterprises  [author] Jan 13, 2016 @ 8:47am
Steam release is coming, and I'll send Groupees the keys once ithe game's on the store. I've got the achievements and trading cards mostly done. I say mostly because Valve didn't really like my two cleavage icons, so I have to replace those with something else. :)

I'm also adding a new game mode, trying to get that as fun as possible.

Massive Cleavage vs Zombies has been Greenlit and is now listed in the Steam store. For the latest information, purchase options, and discussions for Massive Cleavage vs Zombies, please see it on the Steam Store or in the Steam Community.
Visit Store Page
For more details Visit Community Hub
For latest discussions
If you really, really want to, you can continue to the Greenlight page. Information on this page may be out of date, since all the action has moved to the areas noted above.