Greenlight > Games > Enlight Software's Workshop
Greenlight is being retired. For more information on how to submit games to steam, refer to this blog post.
This item has been removed from the community because it violates Steam Community & Content Guidelines. It is only visible to you. If you believe your item has been removed by mistake, please contact Steam Support.
This item is incompatible with Greenlight. Please see the instructions page for reasons why this item might not work within Greenlight.
Current visibility: Hidden
This item will only be visible to you, admins, and anyone marked as a creator.
Current visibility: Friends-only
This item will only be visible in searches to you, your friends, and admins.
Seven Kingdoms 2
Description Discussions8 Announcements4 Comments1927 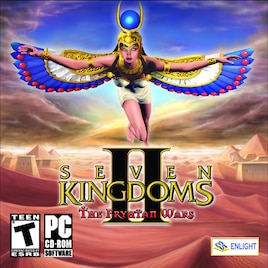 Enlight Software
Offline
See all 30 collections (some may be hidden)

View Seven Kingdoms 2 in the store

We are delighted to announce that Seven Kingdoms 2 HD has been officially released on Steam.

Check out the Seven Kingdoms 2 HD Steam page at: http://store.steampowered.com/app/338800/

Seven Kingdoms 2 HD official web site is live. Check it out at http://www.7k2hd.com/

GameSpot -- 9.1/10
"Trevor Chan has created a perfectly balanced conquest and combat game that deserves the widest possible audience, and has all the depth that Age of Empires lacked. Seven Kingdoms II is without question one of the finest strategy games on the market, largely because the world it creates has realistic dynamics and complexity never overwhelms, but adds a richness found far too rarely in strategy games."
Link: {LINK REMOVED}http://www.gamespot.com/reviews/seven-kingdoms-ii-review/1900-2532952/

IGN. com -- 8.6/10
" Seven Kingdoms II is a highly-enjoyable and highly-detailed strategy game with seemingly limitless options and avenues for replayability. If you were one of the folks who missed out on its predecessor because you already dumped your cash on other RTS games or perhaps felt the genre was over-saturated, be sure to consider this sequel for an entertaining and deeply challenging gaming experience."
Link: http://www.ign.com/articles/1999/11/17/seven-kingdoms-ii-the-fryhtan-wars

Seven Kingdoms 2 has been Greenlit and is now listed in the Steam store. For the latest information, purchase options, and discussions for Seven Kingdoms 2, please see it on the Steam Store or in the Steam Community.
Visit Store Page
For more details Visit Community Hub
For latest discussions
If you really, really want to, you can continue to the Greenlight page. Information on this page may be out of date, since all the action has moved to the areas noted above.